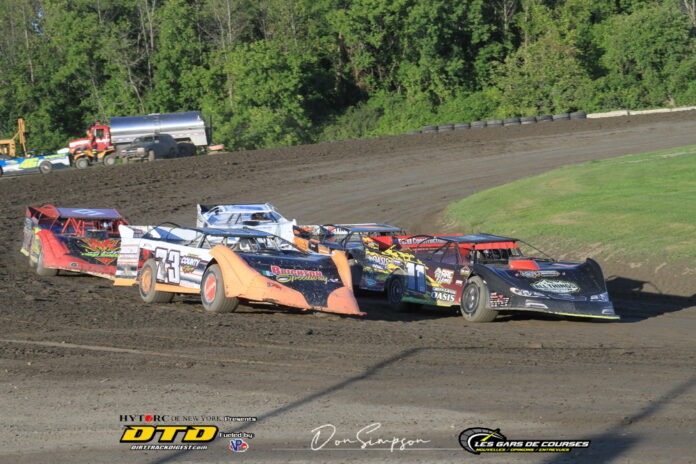 BRIGHTON, ON-It’s an event that has been ongoing since 2005 when an idea of bringing the DIRTcar Northeast 358 Modifieds to Brighton Speedway, went from an internet message board dream, into an on track reality.

Since that day in 2005 when Kyle Dingwall took home the first bushel of apples many drivers in several divisions have tasted how sweet victory lane can be and this weekend will feature veterans and up and coming stars looking to strike paydirt.

In 2021, veteran Danny O’Brien took advantage of Chris Raabe’s late race mechanical issues and held off Cornwall Speedway champion Corey Wheeler, to finally claim the DIRTcar 358 Modified Applefest Shootout, a race that O’Brien had finished 2nd in three times previously. In the DIRTcar Sportsman doubleheader it was Verona Ontario’s Bobby Herrington claiming the win and his first Applefest title. Ryan Scott of Gananoque, former Canadian Modified champion at Brighton, was victorious in the Saturday portion of the program.

Local talent will also be on hand for several divisions this weekend. Wade Purchase had one of the most dominant seasons in recent memory taking the Canadian Modified crown at Brighton for 2022 and will look for his first Applefest Shootout win in the class.

Tyler French also had a great season in Thunderstock action as he looks for victory this weekend. Carter Rhodes and Tommy Bailey had great seasons in Comp 4 and Mini Stock divisions in 2022 and will be heavy favorites for an Applefest title.

A tight battle in this seasons Crate Late Model division saw Steve Baldwin come away with the title with Andrew Hennessy, Kyle Sopaz and former champion Charlie Sandercock right there to challenge every week. These four drivers will be some of the many to watch in this year’s Great Crate Race.

The action begins Friday night with the Apples Eve DIRTcar Sportsman event along with the Eastern Ontario Vintage Stock Car Club. Qualifying heats will take place for the Canadian Modifieds and Northeast Late Model Alliance divisions plus an Open Thunderstock show, the ODCC Mini Stock Duel in the Dirt and a DIRTcar 358 Modified Dash for Cash. Racing begins at 6pm and it’s brought to you by Bryan’s Auction, Coca Cola, and Cool 100.