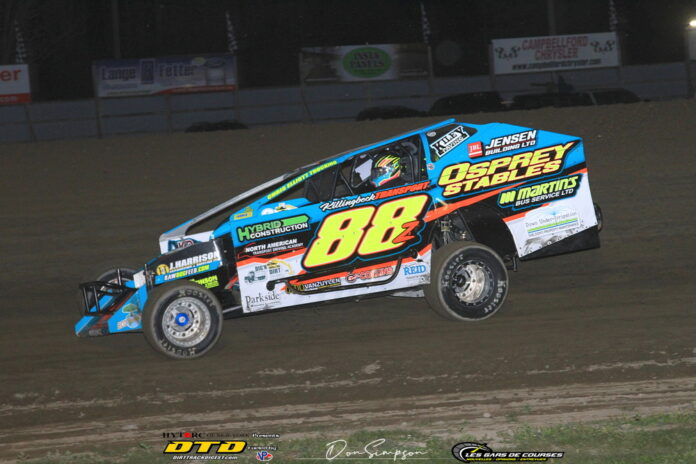 BRIGHTON, ON – The 2022 edition of Apples-Eve at the Brighton Speedway, part of the Applefest Weekend, saw thrilling action all night long. The DIRTcar Sportsman 35 lap feature proved, it’s never over until the checkered flag flies.

Bobby Herrington and Trevor Wright led a field of 32 DIRTcar Sportsman drivers to green with Herrington taking over the lead with Brad Rouse, Wright, William Racine and Dylan Kirkland making up the early top 5. Herrington was quick using the bottom lane on the speedway, but Rouse was equally as good on the high side of the track, as he closed in on Herrington for the lead. Mid race cautions for minor spins slowed the field, giving everyone a shot at the race leader. When the green flew Herrington continued to show the way, but William Racine was on the move as he charged by Brad Rouse for 2nd, and quickly reeled in Herrington for the lead. On lap 25 Racine used a power move to take over the lead and started to pull away. Racine became the fastest car on the speedway, leaving Herrington to battle Brad Rouse for the runner up spot. On lap 34 Jamie Young came to a stop in turn 2, setting up a key restart. When the green and white flew for the final time Herrington was able to sneak by as Brad Rouse made his way to second. Bobby Herrington continued his great season, notching his 2nd Applefest Sportsman championship in three tries. Brad Rouse crossed in second with William Racing Gabriel Cyr and Dylan Kirkland completing the top 5.

The DIRTcar 358 Modifieds were on hand for a special 10 lap Dash for Cash as they geared up for Saturday’s 75 lap Applefest Shootout. Johnathon Ferguson took the lead early but a yellow slowed the field quickly as Todd Gordon and Corey Wheeler got hooked together on the initial start. Both drivers were able to continue. When the green flew it was Ferguson in front but former Applefest Shootout champion Gary Lindberg was on the move. Lindberg would take the lead away and dominate the final laps to score the Dash for Cash victory.

The Eastern Ontario Vintage Stock Car Club was on hand for a 20 lap feature event. Former DIRTcar 358 Modified and Sportsman driver, Jason Riddell led early and looked to be the dominant car, as Brandon Gregory, Steve Billings, Gavin Riddell and Ian Gordon giving chase. Jason Riddell was lapping cars quickly, but the great night ended as he broke while leading. This handed the lead to local favorite Brandon Gregory, who held off repeated challenges from Steve Billings to collect the win. Greg Hale continued his late fall season dominance with another victory in the 50/60 Vintage division.

Top stars in the tracks local divisions were on hand for the first night at Applefest. The 20 lap Thunderstock feature saw an incredible three car battle for the lead as Justin Ramsay made a last lap pass on veteran Doug Anderson to collect the win with 2022 track champion Tyler French crossing third. Continuing the track champion success, 2022 Mini Stock champion Carter Rhodes would hold off a tough field to collect the Mini Stock feature win.

The Northeast Late Model Alliance held qualifying heats and a Dash for Cash on this night. Charlie Sandercock, Brad Rayner and 2022 track champion Steve Baldwin were the winners. Sandercock would hold off Baldwin to win the 10 lap Dash for Cash.