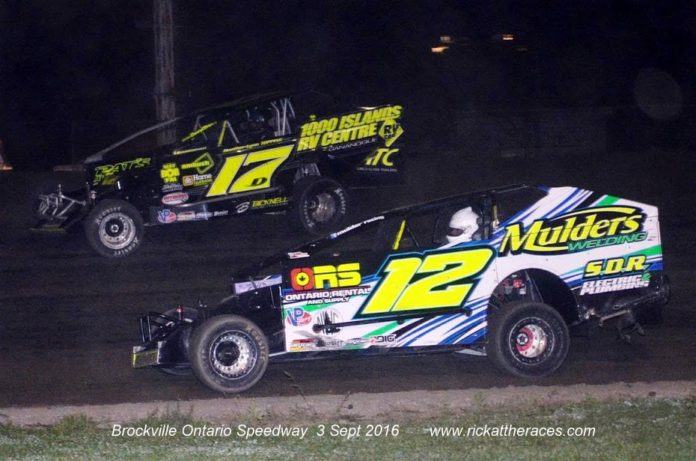 BROCKVILLE, ONT – There is still a bit of a chill in the air as winter transitions into spring, but that hasn’t stopped the level of anticipation from heating-up as everyone looks forward to the new season at Brockville Ontario Speedway. Fans and race teams alike are excited to see the release of the 2017 schedule for The BOS.

An open practice session – from 1:00 ‘til 4:00 – Saturday, May 6th will give drivers the chance to put their equipment to the test. A week later – Saturday, May 13th – 103.7 BOB-FM presents the first of the year’s 17 regular season shows, with the DIRTcar 358 Modifieds, Sportsman-Modifieds and Sportsman Rookies, along with Street Stocks and Mini Stocks. Track owner and promoter Paul Kirkland says it promises to be an exciting season at the popular 3/8th mile clay oval on Temperance Lake Road.

“There’s no way to predict the actual car counts until opening night, but we’re hearing all sorts of rumours and social media sites are buzzing about some new teams joining our weekly program,” Kirkland said. “I think we’ll have a great year and that will make all the hard work we did during the off-season worthwhile.”

Kirkland pointed-out some of the highlights of the schedule, including the new Ogilvie’s Auto & Fleet Quad Crown Series, with 3 shows – May 27th, July 1st and August 5th – during the regular season and the finale as part of the Northeast Fall Nationals Saturday, October 14th. Sprint Car fans will see the Patriot Sprints Saturday, June 10th and July 15th, with the long-awaited return of the Empire Super Sprints Saturday, August 19th. An Open 360 Sprint Car show will be back on the Saturday portion of the Fall Nationals.


New this year will be the 1000 Islands Toyota Top Gun Challenge – Saturday, September 2nd – during the final night of track points for the 5 weekly classes and during the regular season, kids under 15 are admitted free with a paid adult admission.

Short Track Saturday Night Notes: Fans can pick-up a copy of the 2017 schedule during the annual Racing Preview Show – Friday and Saturday, March 24th and 25th – at the Frontenac Mall in Kingston, Ontario…Back this year will be the Fan Fair event – Saturday, April 22nd from 10:30 to 1:30 – at Walmart in Brockville, Ontario. Cars and drivers will be on hand and there will be live entertainment by Ambush. The presentation will be a fundraiser for the Children’s Hospital of Eastern Ontario.

Keep up-to-date with the latest pre-season news and information and see the full 2017 schedule by checking www.brockvillespeedway.com, as well as the track’s Facebook page and Twitter feed.