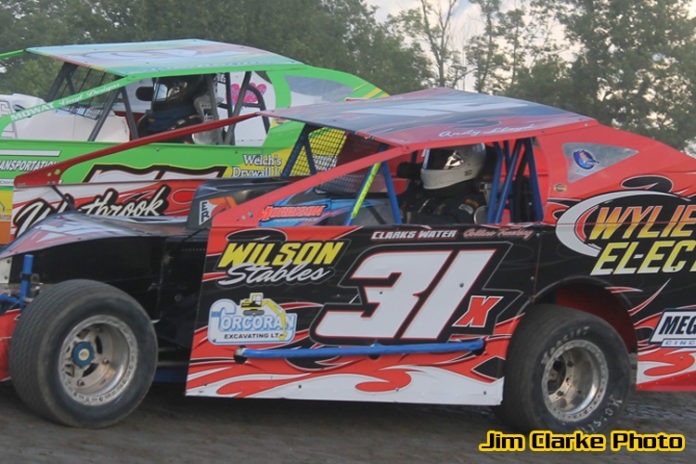 BROCKVILLE, ONT – During the 2016 season, 34 different drivers scored points in the headline DIRTcar 358 Modified division at Brockville Ontario Speedway. This year’s season opener is schedule to hit the track at the popular 3/8th of a mile clay oval on Temperance Lake Road Saturday, May 13th and officials are expecting another strong field of competition.

Throughout the line-up, a pack of popular performers brings a loyal group of family, friends and fans to support their efforts and watch them battle for position week-after-week. They represent their sponsors and hometowns to the best of their ability, looking for the chance to take a turn to pose for photos in victory lane and celebrate a main event win. Speedway owner and promoter Paul Kirkland says its especially exciting when everyone has the chance to score the checkered flag.

“We recognize the long hours of hard work and determination it takes to get the car to the track,” Kirkland said. “At this level, the teams are racing as a hobby. They’re passionate enough about the sport to give-up some of their spare time to be here; to have some fun and that kind of dedication means a lot to everyone connected with this facility.”

Andy Lloyd has no issue with being known as an “underdog”. At the track every week on his own, without a pit crew, he’s been a regular in the DIRTcar 358 Mod field for a dozen years. The 43 year-old from Sydenham, Ontario scored the first – and so far, only – feature event win of his career in July of 2013. Lloyd’s equipment carries the #31x into battle as a tribute to his mother, who passed away in 1986 at the age of 31. The driver who finished 16th in points last year says he enjoys the friendships he’s made at the track over the years.


Portland, Ontario’s Joe Banks has spent 17 years behind the wheel of a racecar. The 30 year-old, who was 11th in the 2016 standings logged 20 checkered flags at the controls of his 4 cylinder machine, but is still waiting for his first Small Block Modified win. With a rich racing lineage – including family members Ed and Ab Banks, who raced at the former Kingston Speedway – the father of 2 says being part of the starting field at ‘The BOS’ has become a long-standing tradition.

With 17 regular season events on the calendar, just about anyone has a chance to make it to the winner’s circle. All it takes is the perfect combination of preparation and racing luck to become the next smiling face, posing for photos in victory lane.

Short Track Saturday Night Notes: Back this year will be the Fan Fair event – Saturday, April 22nd from 10:30 to 1:30 – at Walmart in Brockville, Ontario. Cars and drivers will be on hand and there will be live entertainment by Ambush. The presentation will be a fundraiser for the Children’s Hospital of Eastern Ontario…’The BOS’ will host an open practice session Saturday, May 6th from 1:00 ‘til 4:00.

Keep up-to-date with the latest pre-season news and information and see the full 2017 schedule by checking the exciting new look of www.brockvillespeedway.com, as well as the track’s Facebook page and Twitter feed.