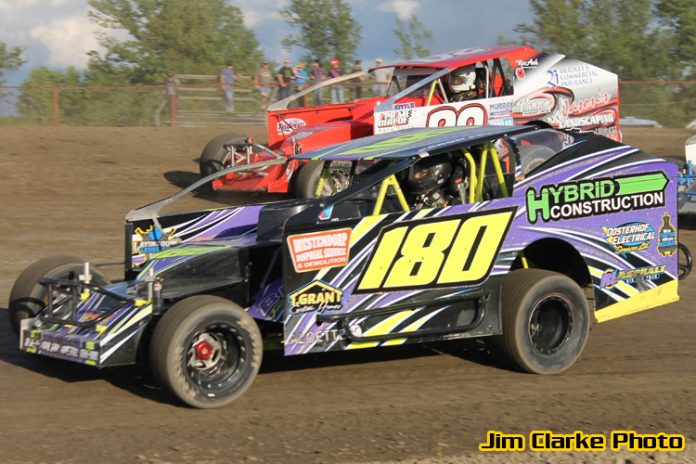 BROCKVILLE, ONT – In less than a week, motorsports fans in Southeastern Ontario will get their first chance of the year to enjoy their favourite leisure-time activity, as the 2017 schedule gets underway at Brockville Ontario Speedway. The green flag will wave Saturday, May 13th at 7:00 as 103.7 BOB-FM presents a night of DIRTcar 358 Modified, Sportsman Modifieds and Sportsman Rookies; along with Mini Stocks and Street Stocks. Track owner and promoter Paul Kirkland says its an exciting time for drivers and fans, as well as track officials and staff.

“Our weekly home track classes are part of all 17 regular season events,” Kirkland said. “There will be appearance by some special guest divisions throughout the year. The Outlaw Vintage Mods will be on hand for 8 shows, with the Patriot Sprints visiting Saturday, June 10th and July 15th. ESS Super Sprints return Saturday, August 19th and the TUSA Mod Lites are back Saturday, August 5th.”

The 2017 calendar at The BOS will include the Ogilvie’s Auto and Fleet Quad Crown Series, with the finale of this year’s 4 race line-up scheduled for a 100 lapper during the Saturday, October 14th portion of the 1000 Islands RV DIRTcar Northeast Fall Nationals.

Fans will notice changes in the pit area as well. Luke Whitteker is slated to return and a pair of drivers – Alex Gagnon and Brock Cullen – are making the jump from the Street Stock ranks to Rookie Sportsman. After almost a handful of seasons in the Sportsman-Modifieds, Aaron Pugh will head to the 358 Modified field.


Gates open weekly at 5:00, with regular season events getting underway at 7:00. With the exception of the Northeast Fall Nationals, kids under 15 are admitted free with paid spectator grandstand general admission. Proof of age required.

After 4 seasons in the Sportsman Modified division, Kingston’s Aaron Pugh (#180) will move to the Small Block Modifieds when the 2017 season gets underway – Saturday, March 13th – at Brockville Ontario Speedway.