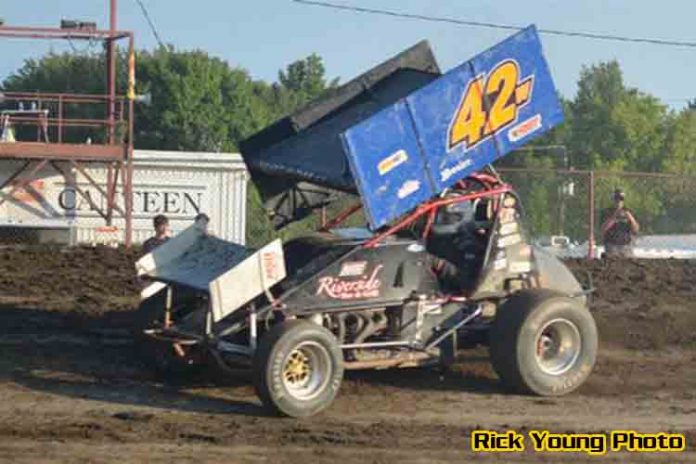 2015 PST champion Sammy Reakes IV and Wilson would lead the field to the initial green flag, however before a lap could be completed the red flag was thrown for the 123 of Yan Bilodeau and 10b of Mitch Brown. The two made contact down the backstretch, resulting in both cars flipping. All drivers were OK.

After a complete restart as no laps were complete, the next 16 laps were run without incident. At the half-way point, Rick Wilson led Westbrook, and sixth starting Jared Zimbardi.

The caution flew once again on lap 16 for the number 17 of Sammy Reakes IV, who slowed on the top of turn 4 and did not return to the racing surface. On the ensuing restart, Wilson once again grabbed the lead. While Zimbardi and Westbrook battled for second, fourth place runner Alain Bergeron fell off the backstretch, and had lost multiple spots by the time he returned to the racing surface.

Wilson never looked back, and ended up parking his car on the front stretch for the $2,000 win. Westbrook was second, followed by Zimbardi, Alain Bergeron and Jake Brown to round out the top 5.

“Westbrook was underneath me, but down here in the corner (turn 1), you could drive in on the bottom and catch that cushion coming out,” Wilson explained in victory lane. “There was no way anyone was going to drive under or around me doing that.”

15 cars signed into the pits for the evening, separating the field into two heat races. Only one caution slowed the pace in heat race action, when in heat one the 15aw of April Wilson slid over the bank in turn one on lap number two. Kyle Fraser also experienced a mechanical failure in heat one, but was able to pull to the infield without incident. Dylan Westbrook won heat race one, and Alain Bergeron picked up the win in heat race two.

The Patriot Sprint Tour will return to action this Friday night, June 16, at Outlaw Speedway in Dundee, NY, and then travel south to the Selinsgrove Speedway the following night, Saturday June 17th for the $2,571 to win Joe Whitcomb Memorial. The Canadian Series resumes on July 16 when they return to Brockville and then on Sunday, July 17 at the Cornwall Speedway.