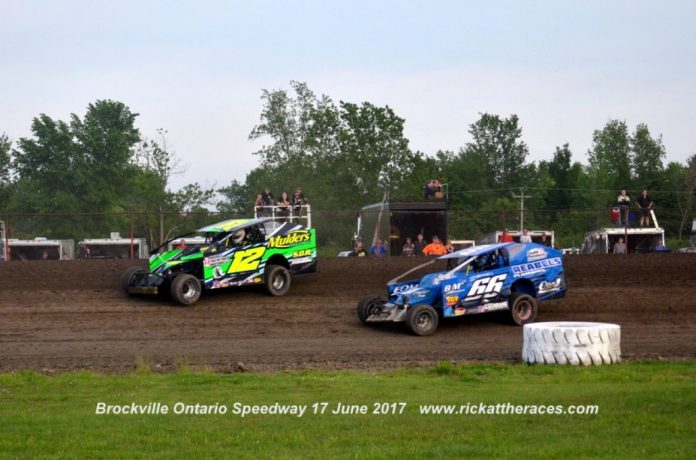 They’re pulling-out all the stops to mark the country’s 150th birthday – Saturday, July 1st – at Brockville Ontario Speedway. The fan favourite 3/8th mile layout on Temperance Lake Road, north of the city kicks-off a new month of action with the second event of this year’s rebranded Ogilvie’s Auto & Fleet Quad Crown Series for DIRTcar 358 Modifieds. The show will also feature the Sportsman-Modifieds, Sportsman Rookies, Street Stocks and Mini Stocks and will wrap-up with a spectacular Canada Day fireworks display.

Multi-time track champion Danny O’Brien took the opening round of the popular home track challenge that won’t be decided until Saturday, October 14th as part of the 1000 RV DIRTcar Northeast Fall Nationals. If the first half of Brockville Speedway’s 2017 season is any indication, fans will be in for an exciting conclusion to the current campaign. In recent weeks, Joe Banks scored the first 358 Modified feature win of his career, while Tim O’Brien held-back a late race charge by his brother to take his first checkered flag since 2011. Saturday, June 17th Chris Herbison scored his first Small Block Mod win of the year.

“Other than a small glitch caused by weather on our original opening night, its been a great season,” said Brockville Speedway owner and promoter Paul Kirkland. “The car counts have been good and fan support has been strong. We’ve had some outstanding action on the track in all of our weekly classes and that’s what the people pay to see.”

Kirkland says the Ogilvie’s Quad Crown Series is one of the most popular group of events on the schedule. Other highlights during the second half of the calendar include another date with the Patriot Sprint Group on July 15th and the long-awaited return of the Empire Super Sprint Car Series on August 19th. New this year will be the 1000 Islands Toyota Top Gun Challenge – on the final night of track points for all classes – Saturday, September 2nd.

Short Track Saturday Night Notes: Take advantage of special Canada Day general admission grandstand pricing for Saturday, July 1st at ‘The BOS’. The more you buy, the more you save. One ticket is $22, 2 for $40, 3 for $54 and 4 for $64…Its not too early to reserve your weekend camping spot for the 1000 Islands RV DIRTcar Northeast Fall Nationals.

Keep up-to-date with the latest news and see the full 2017 schedule by checking www.brockvillespeedway.com, as well as the track’s Facebook page and Twitter feed.