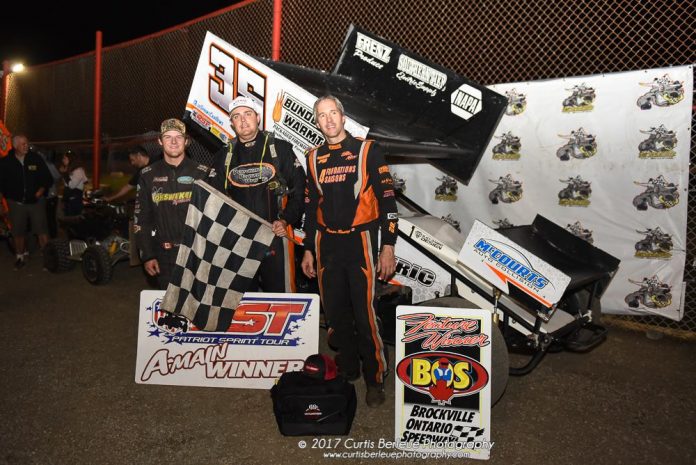 BROCKVILLE, ONT – Jared Zimbardi took advantage of starting on the pole and led all 25 laps but it was not easy as he had to hold off point leader, Dylan Westbrook who came home second. It was his first Patriot Sprint Tour Canadian series win of 2017, and his fifth overall on the season.

Zimbardi drew the pole and would start alongside Steve Poirier bringing the 15-car field to the green. Dylan Westbrook would start third as the three would begin to pull away from the rest of the field.

Westbrook was able to get by Poirier on lap four and begin to set his sights on the race leader of Zimbardi and would pull alongside Zimbardi on several occasions but would not be able to clear him.

As Zimbardi and Westbrook would battle for the lead, Poirier ran comfortably for third while Cory and Ryan Turner would complete the top five at the time.

Lap traffic would not become a factor until lap 11 when Zimbardi met Paul Pekkonen and would use it to his advantage to pull away from Westbrook.


Westbrook would eventually get by Pekkonen and immediately after, Sammy Reakes would make contact with the front stretch wall to bring out the first yellow on lap 15.

On the restart, Westbrook would attempt to find something on the top but was not able to get by, allowing Zimbardi to build his lead with laps clicking away.

Westbrook was able to hold onto second and maintain the point lead, but it was Jared Zimbardi picking up his first Canadian Series win of 2017. Westbrook and Poirier would complete the podium followed by Cory Turner and Mitch Brown rounding out the top five.

With the win, Zimbardi pulls within two points of Westbrook heading into tonight’s race at the Cornwall Motor Speedway. Of the two, whoever has a higher finish tonight will in all likelihood be crowned the 2017 Canadian Champion. The only event remaining for the Canadian Series is the Canadian Sprint Car Nationals in September, which awards PST show up points.

Tonight’s event at Cornwall will be 30 laps in honor of it being the 300th race in PST History.