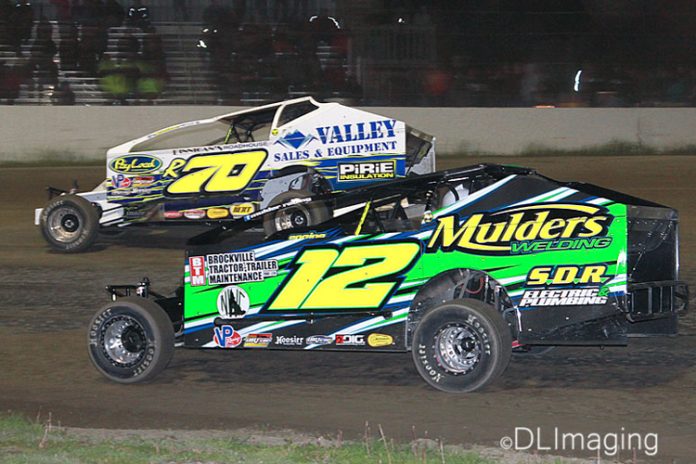 BROCKVILLE, ONT – Once a week – during the spring, summer and fall – local hometown speedways are transformed into their own community. Since taking over the promotional reigns at Brockville Ontario Speedway in 1995, the Kirkland family has been proud to welcome an extended family of motorsports enthusiasts to the popular 3/8th mile Eastern Ontario oval.

With a weekly race program sanctioned by the DIRTcar Racing arm of World Racing Group, The BOS – an acronym that has been widely used to identify the track – features Dirt Small Block Mod, Sportsman-Modified and Rookie Sportsman divisions as its headline classes, as well as Street Stocks and Mini Stocks. There are also several guest divisions throughout the year.

Paul and Cheryl Kirkland are pleased to announce that the track has recently been named Elizabethtown-Kitley Business of the Year. The award is the latest honour to be presented to track and its staff. In 2010, Brockville Speedway won the Brockville & District Chamber of Commerce Award of Excellence Small Business of the Year Award. Cheryl Kirkland was named the Outstanding Woman in Racing Award winner in 2012 and a year later, the Kirkland Family received the Sportsmanship Contribution to Motorsports Award.

In addition to its successful Saturday night race programs, Brockville Ontario Speedway is also involved in the community and participates in many charity events through the season, including hosting a fundraiser for CHEO – the Children’s Hospital of Eastern Ontario – as part of its annual pre-season Fan Fest. The track partners with many local products and businesses and offers employment to between 50 and 60 staff throughout the year.

“It was a tremendous honour to be nominated,” Paul Kirkland said. “Being named Elizabethtown-Kitley Business of the Year acknowledges the hard work that we put into every season and is a wonderful tribute to our staff and the drivers and fans who have continued to support us throughout the years.”