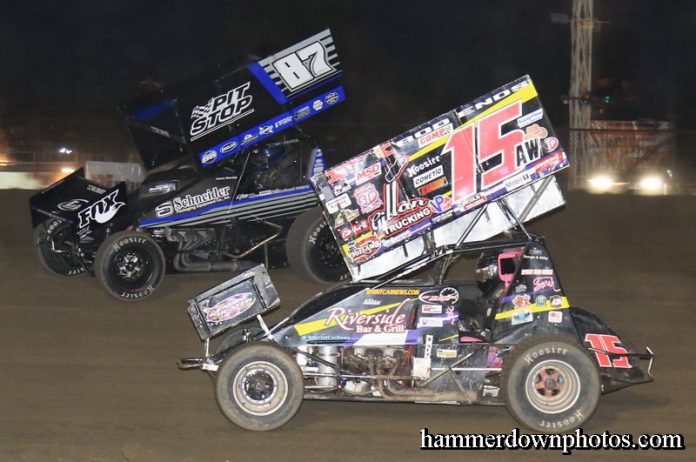 BROCKVILLE, ONT – Brewerton, NY’s Jason Barney has been making a late season statement why he is the 2017 Lucas Oil Empire Super Sprints (ESS) champion by winning his second consecutive $3,000 October victory. Taking the lead from Jeff Cook on lap 11, he beat Mike Mahaney and Coleman Gulick to the line to win the 1000 Islands RV Fall Nationals event at the Brockville Ontario Speedway.

Cook and Barney drew the front row for the 25 lap A-Main with Cook taking to the ample Brockville cushion to open up a sizeable lead early. As the laps clicked on you could see Barney’s #87 closing in. Just before halfway he made his move.

“This is a big win and it feels good to get another win here at the end of the season helping to bring down a great year for me and my team,” noted Jason, “I could see Jeff (Cook) getting a little loose and when we hit the slower traffic I was lucky enough to get a lane down low to get by.”

As lap 11 was scored Barney’s inside sweep got him the lead. Yellow lights shined one lap later for a slowing Jeremy Lasalle which put the duo side by side on the restart. When the green lights shined again, it was Barney taking his front slot again.


As fourth place starting Mahaney also slipped by Cook he tried to reel in the leader. “The track was awesome, It was fast low and high which makes it tough because you don’t know where the cars behind you are running,” Barney continued, “I was comfortable down low but when we came to traffic I had to go high but felt good there also.”

“We were thinking of going to the Short Track Nationals in Arkansas at the beginning of the year but we felt being ESS champion we have to support tracks like Brockville that had us come in to put on a show and also pay a real good purse,” he went on, “The track was just amazing and with the weather they ran the show right off, we want to thank them.”

For Mahaney his first ever sprint car start at the quarter-mile resulted in a $2,000 pay day aboard the Doug Emery #33. “I think If I could got around Jeff (Cook) before the caution I could have started in the front row with Jason we might have had a better chance,” Mahaney noted, “Being behind the front row, I had to pass Jeff and then catch up to Jason but these laps go quick here.

“I think I might have had a better car there at the end but Jason did a great job passing the slower cars,” Mike on the end of the race, “The track was real racy and it was real fun out there. Thanks to Doug for giving me a great car.”

Gulick’s #14 started in ninth and he immediately took to a groove he is familiar with, up on the cushion. “I went right up high early and picked off some cars, the track was good up there, it was a real good track,” said the Binghamton native. “We just needed a little bit better draw, but that’s ok, everyone had the same numbers to pull from the bucket. We are just glad to get a good run, some momentum as we have been struggling a bit lately.”

Cook held on to place fourth at the end holding off a charging Paulie Colagiovanni. Rounding out the top ten were Rick Wilson, Alain Bergeron, Cory Turner, Dave Axton and Jordan Poirier.

In a very unusual moment, Matt Billings was seen flipping off turn three while the cars were lining up for the initial start. He was ok but perplexed on what happened to the car. Jeremy Lasalle made his first ever sprint car start aboard Shawn Donath’s #53 while Shawn couldn’t attend due to a family function. Lee Ladouceur and Yan Bilodeau suffered blown engines.