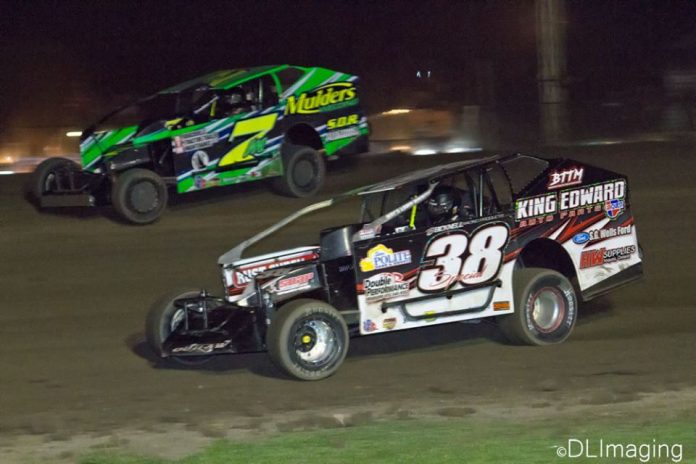 The 3rd and final DirtCar Series title was up for grabs this past weekend as just 26 points separated defending series champion Chris Raabe from points leader Steve Bernard and both would have their work cut out for them. Erick Rudolph would take command early on and lead the opening 8 laps with Luke Whitteker, Dale Planck, Mike Maresca and Gage Morin giving chase. Rudolph the defending race winner was charging hard in the early stages and had his potent Troyer chassis set up perfectly. JF Corriveau brought out the first yellow on lap 11 as he spun off turn 3. When the green flew Rudolph continued to lead but Mike Maresca was on the charge ashe made his way to the top 3 getting by Planck and then worked on Whitteker for the number 2 spot. On lap 20 Joey Ladouceur and Lance Willix tangled on the backstretch sending Willix spinning out and the caution flew again. With multiple grooves on the speedway the top 5 drivers were constantly searching for the fast lane and Mike Maresca showed that the top lane was quick as he got by Whitteker for 2nd on the restart and quickly ran down Erick Rudolph. The battle for the title got a little interesting just past halfway as Kyle Dingwall lost the left rear quarter panel after contact with another driver, the panel ended up on Steve Bernard’s car under caution while running 8th. Bernard tried desparately to shake the panel free but would stop on the race track, get it removed and would restart 24th with Raabe running 5th. The battle for the lead was spirited as Mike Maresca took over the top spot on the top side from Rudolph on lap 75. Rudolph stepped it up a bit more as he charged back after Maresca while Luke Whitteker watched it all unfold from 3rd. With 12 to go Rudolph lost control of his car in turn 4 spinning off the speedway, while heading to the pits he would lose a right front tire ending his great night. On the restart Luke Whitteker was determined and would take the lead away with Planck moving to 2nd while David Hebert got by Maresca for 3rd with Chris Raabe now 5th. In the final stages Whitteker got faster and would drive away but 5 car lengths to score the biggest win of his career, a DirtCar 358 Modified Series win. Planck held off Hebert for 2nd with Chris Raabe and Mike Maresca rounding out the top 5. Whitteker would also claim his first Ogilvie’s Quad Crown Title and with a 7th place effort Steve Bernard would claim his 2nd DirtCar 358 Modified championship in 3 years.

In 360 Sprint Car action it was fixing to be a great night for Brockville’s Matt Billings but a problem with the steering after getting pushed started saw Matt roll his car off turn 3. Billings was unhurt but frustrated to say the least. Once the race got going Antwerp NY’s Jeff Cook led early on over Jason Barney, Mike Mahaney, Coleman Gullick and Alain Bergeron. Cook had a fast car but Barney remained within 5 car lengths of the leader. On lap 9 the drivers began to enter traffic which played right into the hand of bot Barney and Mahaney. On lap 10 Barney made the move on Cook taking the lead away with Mahaney staying right with the leader to move into 2nd with Cook Gullick and Bergeron completing the top 5 drivers. On lap 12 Jeremy LaSalle would slow in turn 3 bringing out the caution. On the restart it was another classic battle as Barney and Mahaney would go at it for the win just like they did at Utica Rome 1 week ago. The top 2 drivers ran hard with neither driver making any mistakes, despite lapped cars Barney and Mahaney were able to stay close with Gullick, Cook and now Paulie Colagiovanni completing the top 5. In the end Jason Barney was not to be denied as he scored his first Fall Nationals 360 Sprint Car win. Mahaney came home a close 2nd with Coleman Gullick, Jeff Cook, and Paulie Colagivanni completing the top 5.

In the Mini Stock 30 lap event Cornwall regular Alexis Charbonneau would dominate the early portion of the event over 5 time Brockville winner Dustin Bode, Melissa Gifford, defending Fall Nationals champion Joe McNichols and Colin Tracey. At the halfway point Charbonneau led the way but Joe McNichols was on the charge getting by both Gifford and Bode to move into 2nd and the chase was on. A late caution flew setting up a green, white, checkered finish. On the restart Charbonneau did not get going which allowed McNichols to drive by on the top side and march on to his 2nd win of the year and 2nd straight Fall Nationals title. Charbonneau would cross 2nd over Melissa Gifford, Justin Jodin and Colin Tracy.

The 30 Street Stock feature was one for the ages as Justin Ramsey led early on over Vince Fargnoli, Adam Wells, Todd Raabe and Brian Cross. Ramsey had the best car in the early stages as he pulled away by nearly a straight away and was looking to repeat his performance from 1 year ago. Fellow Brighton regular Wade Purchase had won twice in 2 starts in 2017 and was on the charge looking to remain perfect. As the laps wound down it appeared Ramsey would cruise to the win but a caution would set up yet another green, white, checkered finish. On the restart Ramsey went straight to the bottom while Purchase stayed to the high side. As the top 2 came to the white flag Purchase edged ahead and took over the lead Ramsey did all he could from the bottom but it was not to be as Wade Purchase would score the come from behind win, his 3rd win in 3 starts. Ramsey held on for 2nd with Vince Fagnoli, Adam Wells and Tyler Bushey completing the top 5.

The staff and management at the Brockville Ontario Speedway would like to thank all the great sponsors and race fans who help us make the 2017 season a success. We wish everyone a great off season and look forward to what the 2018 campaign has in store.