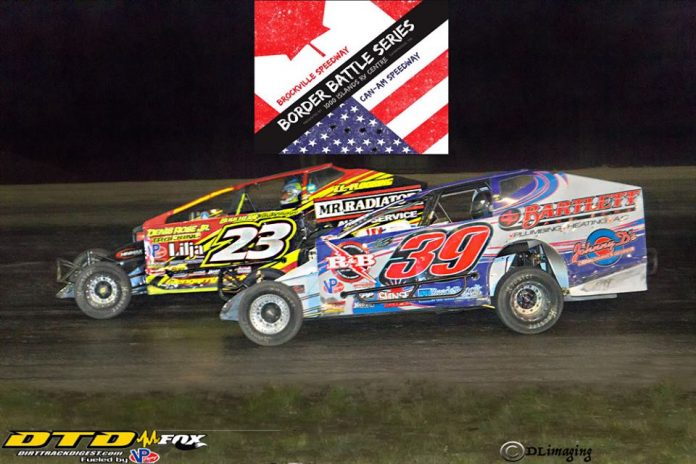 With the finalization of the sale of Can Am Speedway to the Bartlett Family just a few days ago, the forty-four-year-old track will be entering a new era racing at the facility.

The track will transition back to Friday nights for its racing schedule as well as returning to DIRTcar sanctioning.

There will be some great special events through the summer schedule with the return of the Empire Super Sprints, a mid-week show on July 4. There is also a 50 lap big/small-block special event scheduled for June 20 with $5,000 up for grabs. But the creation of the new Border Battle Series with the Brockville Ontario Speedway has the potential to rejuvenate old track rivalries attracting racers from each track to take on the hometown heroes.

The series was conceived mutually between Tyler and Ryan Bartlett of Can Am Speedway, Paul and Cheryl Kirkland — owners of the Brockville Ontario Speedway. Henry Boer of 1000 Island RV was also consulted on the idea. The series will consist of a four-race over the summer for the 358-Modifieds.


Each track will hold two events, the first of which will be at the Can Am Speedway on June 8, followed by the first Brockville Speedway event the following night on June 9.

Races three and four of the series will be held mid-July, with the first being on July 13 at the Can Am Speedway, followed by the last event at Brockville Speedway on Saturday, July 14.

Each event will also have a greater paying purse structure for each of the race nights consisting of $2,000 for a 35-lap feature. This should bring in a good number of cars for each event. It is also expected that some of the regular 358 cars from Fulton as well as the Utica-Rome Speedway will also compete, as both tracks will be going to 358-Modifieds as their lead class this year.

“Tyler Bartlett and I are extremely excited about the new series and have formed a good working relationship bringing this series forward,” Paul Kirkland explains. Henry Boer of 1000 Island RV describes, “the track promoters consider how they can improve racing for drivers and fans, and working together is an excellent option moving forward. Seeing a win-win for fans and the tracks, 1000 Islands RV Centre jumped at the chance to sponsor this new series.

“There are also plans in the works,” Tyler explained, “to incorporate the Sportsman Modifieds into the series in the near future.”

The new Border Battle series is definitely a good step forward for both tracks and will be a positive for fans on both sides of the border as the series moves forward.