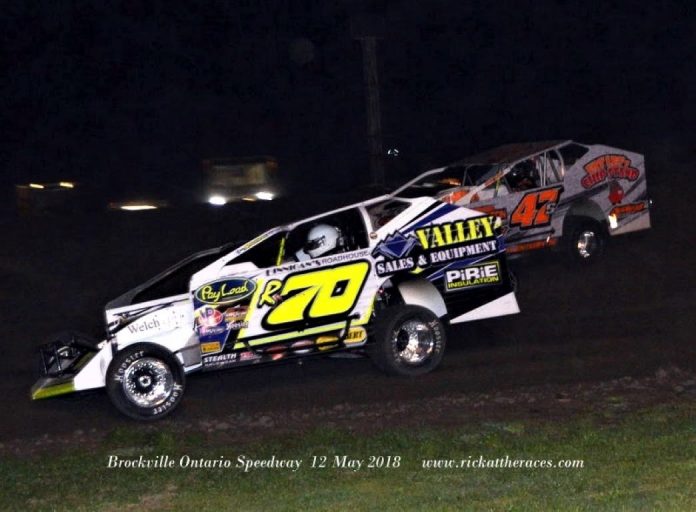 BROCKVILLE, ONT – There will be plenty of action to thrill fans during the 2018 season at Brockville Ontario Speedway. Saturday, June 9th the first of the year’s special events takes the green flag as 1000 Islands RV presents the Border Battle Series at the fan favourite 3/8th mile clay oval on Temperance Lake Road, north of the city.

A back-to-back program – in conjunction with Can Am Speedway in Lafargeville, New York, with a pair of shows at each track – features the Small Block Modifieds running a 35 lap ‘A’ main for a $2,000 payday, while the Sportsman-Modified teams contest a 30 lap headline dance, with $800 on the line. The Brockville event also includes the Rookie Sportsman, Street Stock and Mini Stock divisions. Track owner and promoter Paul Kirkland says it’s been a great early season at The BOS.

“On opening night, reigning track champion Luke Whitteker snatched the win with a late race pass on multi-time title holder Danny O’Brien and a couple of weeks after that, Jeremy LaSalle clinched his first 358 Mod win. June 2nd, Ryan Arbuthnot claimed his first win of the year,” Kirkland said. “In the Sportsman-Modified ranks, Johnathon Ferguson took the first checkered flag of the year and continued a hot streak that began a night earlier at MIR. After a rainout, former high point man Shane Pecore grabbed the win and Ryan Scott copped the most recent checkered flag.”

The weekly racing is always a crowd favourite, but special events play a huge part in Brockville Ontario Speedway’s summer schedule and there is none bigger than the Wednesday, August 8th inaugural running of the Bullringer 110, presented by RTD Trailers. Perhaps the most prestigious mid-week show in track history, the 110 lap main event for the DIRTcar 358 Modifieds has a $10,000 cheque waiting for the winner. Sportsman teams will contest the same race distance, with $2,000 paid to the first car across the line.

“We’re expecting our home track regulars, along with a star-studded field from this side of the border, in addition to the best of the best to represent New York State, Pennsylvania and New Jersey,” Paul Kirkland said. “Super Dirt Week winners, Mr. DIRT champions; the most popular names in DIRTcar racing will be rolling through our pit gates, looking to take away our biggest payout of the year.”

Saturday night short track racing notebook: Its never too early to start thinking about the 2018 edition of the Loud & Dirty Brand DIRTcar Northeast Fall Nationals – Friday and Saturday, October 12th and 13th – at Brockville Ontario Speedway. 2 days of powerful action with the Big Block and Small Block Mods, Sportsman Modifieds and more. Head to the track web-site and social media feeds for all the details.

The full event schedule and up to the minute news can be found by visiting www.brockvillespeedway.com, by liking Brockville Speedway on Facebook or following the track on Twitter.