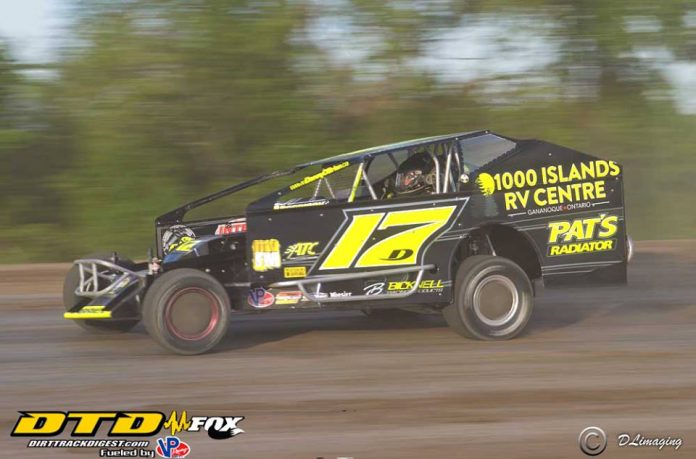 BROCKVILLE, ONT – A clear skies and a fast track was the setting this past Saturday night at the Brockville Ontario Speedway and the 1000 Islands RV Border Battle Series was the highlight of the night for both the Modified and Sportsman divisions. This series featured drivers from both Can-Am and Brockville Speedways and the racing was as intense as ever. With 4 other divisions on tap and exciting finishes, it was a great night for all involved.

The 35 lap 358 Modified feature took green and Brockville’s Chris Herbison wasted no time jumping into the lead over Danny O’Brien, Luke Whitteker, Kyle Dingwall and Ryan Arbuthnot. Herbison had a fast car in the early going as he began to pull away from O’Brien in the early laps. On lap 13 Jeremy LaSalle who won his first ever feature 2 weeks ago went off the track in turn 2, he was able to continue on. When the green flew it was still Herbison in control followed by O’Brien, Dingwall, Whitteker and Arbuthnot completing the top 5. On lap 14 Uke Whitteker came to a crawling pace on the front stretch ending his chance at victory. He was able to get the car to the pits and the race remained under green. At the halfway point Herbison was under attack from O’Brien as the 13 time champion made his move taking over the lead with Ryan Arbuthnot taking 2nd over Herbison, Dingwall and Gage Morin breaking into the top 5 for the first time all night. With O’Brien in control traffic started to become a factor as Arbuthnot who was looking for 2 wins in a row, started to reel in the leader. On lap 23 Gage Morin saw his chance at a good run go away as he slid off the top side of turn 4. With 10 to go O’Brien and Arbuthnot were in a tight battle for position as Kyle Dingwall stayed close by in 3rd. Invader Mario Clair charged forward late in the event to run in the 4th spot with Tim O’Brien completing the top 5. As the laps wound down Danny O’Brien used the extreme outside lane and used it to perfection as he held off a determined Ryan Arbuthnot to score his first win of the season at Brockville. Ryan Arbuthnot crossed in 2nd over Kyle Dingwall, Mario Clair and Tim O’Brien.

The Sportsman portion of the Border Battle Series continued with a 30 lap event. Shane Pecore jumped to the lead from the pole over Johnathon Ferguson, Gabe Cyr, Jason Shipclark and Ryan Scott. On lap 1 Dale Gifford and Josh Kirkland came together in turns 3 and 4 bringing out the first yellow on the night. On the restart Pecore continued his strong night as he held the top spot over Ferguson with Ryan Scott making a big move taking over the number 3 position. Behind the top 3 a pair of young drivers were battling for a top 5 spot. Gabe Cyr and Jesse Hudson raced several laps side by side with neither driver giving an inch but had to work things out before they lost sight of the top 3. Hudson would clear Cyr off turn 4 and set his sights on running down the top 3 drivers. On lap 8 a multi car tangle in turn 4 saw Dave McDonald turn over on his side in turn 3 bringing out the red flag. McDonald was able to climb out on his own and unhurt and all drivers involved were ok. When the green flew no change at all in the top 3 as Pecore, Ferguson and Scott continued to occupy the top 3 positions. Behind them Tristan Draper was on the move coming from 9th on the grid to challenge Jesse Hudson for 4th, and would be successful taking over as he started to close in on the top 3. As the race drew to a close Pecore remained stout in the number 1 spot and would go unchallenged to score his 2nd win of the year, the first 2 time winner this season. Ferguson held on for 2nd over Ryan Scott, Tristan Draper and Xavier Andrews who charged from 13th starting spot to complete the top 5.

The Street Stock 15 lap feature may have been light on cars, but the racing action at the front of the field was the story of the evening as Tyler Bushey and veteran Todd Raabe put on an incredible side by side battle for the top spot over Michael Dillon, Steve Brady and Kyle Massey. Both drivers never backed down and both driver could not get an edge over the other one either making it a great battle for the race lead. On lap 12 Kyle Massey who was debuting a brand new race car, lost the handle in turn 2 ending his great run. On the restart the battle for the lead was back on as Raabe worked the bottom and Bushey continued to use the top side of the speedway. On the final lap it came down to those 2 drivers as they raced door to door into turn 3. Off turn 4 heading to the checkered flag both drivers brought the fans to their feet as Raabe got loose on the bottom lane allowing Bushey to charge to the checkers and win by the narrowest of margins. For the defending track champion, it was his 3rd straight win on the season and Todd Raabe held on for another runner up finish. Michael Dillon crossed the line 3rd over Steve Brady and opening day winner Sheldon Hoogwerf.

Outlaw Vintage is a division that has grown in leaps and bounds over the last few years and on this night the racing was something special to watch as veteran Wayne Riddell led early on over Nathan Berry, Pete Stapper, Kenny Polite and Josh Powers. Riddell always has fast cars in this division as he pulled away early on. On lap 4 the caution flew as Darrell Wilson and Tim Charland spun off turn 3 but both drivers were able to continue on. The next restart saw a multi car crash in turn 2 as Justin Saunders received the most damage as he broke the front end on his machine. When the race resumed Nathan Berry took control with Kenny Polite following him to 2nd setting up another classic battle between 2 young stars. Berry held the low lane while polite worked the top side which set up a fantastic finish. On lap 13 Kenny Polite got the run he was looking for as he charged down the front stretch to take the lead off turn 4. After taking a couple seasons off and rebuilding his racing program Kenny Polite proved he was back as he charged to his first ever Outlaw Vintage win. Nathan Berry crossed in 2nd over Josh Powers, Matt Barbour and Steve Billings.

Mini Stocks have been a popular class at Brockville as of late and they put on another great show as defending track champion Dylan Kirkland was looking to get his season back on track as he took the lead at the start of the race over Jarrod Galway, Tyson Slinger, Mark Packer and Brandon Henderson. Kirkland had everything going his way and after a tough heat race earlier in the night, was looking in fine form but Galway was trying his best to close in. Meanwhile Brandon Henderson was looking to add to his win total on the season. The long time Mini Stock campaigner was looking for 3 in a row but had a tall order ahead of him as he charged by Tyson Slinger for 3rd and made a valiant effort to run down the top 2. On this night Dylan Kirkland was perfect as he drove away from a quality field to score win number 1 of 2018. Jared Galway had his best run of the year taking 2nd over Brandon Henderson, opening day winner Dominick Merkley took a borrowed ride to the number 4 spot while Tyson Slinger held on for a 5th place finish.

The Rookie Sportsman closed out a great evening of racing as Gavin Riddell led early on over Xavier Perrin and Michel Fournier. Plenty of cautions slowed the pace of the 25 lap affair on a number of occasions but Brock Cullen who was looking for his 3rd win in a row played the patience game. Both him and Riddell were putting on another great show for the fans as the battled for the lead in the remainder of the 15 lap feature with Gorden Clair competing the top 3. with 3 to go something let go on the Riddell machine costing him a chance at the win brining Cullen and Clair to the top 2 spots. Despite a last lap effort Gorden Clair would have to settle for 2nd as Brock Cullen kept the roll going taking his 3rd straight win in Rookie Sportsman. Clair had a great Brockville Debut taking 2nd with pole sitter Michel Fournier coming home 3rd.

Next week Ontario Rental Service will be on hand for a full program of racing in all 5 classes. Racing action kicks off with the first green flag at 7pm.