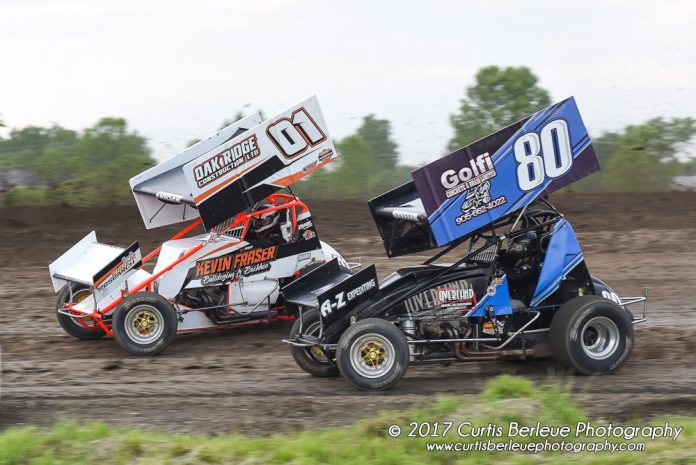 SODUS, NY – The A-Verdi Storage Containers Patriot Sprint Tour will look to get back in action this coming weekend after another rained out event at Woodhull Raceway this past Saturday night. The tour will make its only appearance in Canada this weekend for the ‘Canadian Triple Treat’ – three races each paying $3,333 to win and $333 to start (USD).

A forecast that called for just a slight chance of a thunderstorm in the early evening at Woodhull Raceway proved to be wrong and the action was sidelined once again in 2018 after two showers passed through making the track too soggy to work in. The event will now be run on Saturday August 25. Fans, drivers and crews should hold on to their tickets and wristbands as they will be honored that evening.

This Friday, July 20, will see the annual trip for the Patriot Sprint Tour to Ohsweken Speedway located in Ohsweken, Ontario. During last years visit, Ohsweken regular Dylan Westbrook took home top honors en route to his first PST Canada Championship. Westbrook will attempt to defend his crown this weekend against a strong contingent of both Ohsweken regulars and Patriot invaders.

Friday night at Ohsweken will also be their driver autograph night. Fans will get the chance to interact and get autographs from their favorite Patriot Sprint Tour stars. Drivers expected to be on hand include current points leader ‘The Cobra’ Chuck Hebing, 2017 Canadian Sprint Car Nationals runner-up Jordan Thomas, multi-time PST champion Jared Zimbardi and many more!


The following night, Saturday July 21, will be night two of the Canadian Triple Treat at Brockville-Ontario Speedway. As in years past, it will be driver autograph night at the BOS and fans will be able to get an autograph from their favorite PST driver! Last year, Canadian Rick Wilson and perennial PST champion Jared Zimbardi both took home A-Main victories in two separate visits.

The Canadian Triple Treat weekend will conclude on Sunday, July 22 at Cornwall Motor Speedway. During last years barn-burner, Steve Poirier took home the victory and the PST Canada championship was decided in the final laps with Dylan Westbrook narrowly finishing ahead of Jared Zimbardi.

There will be a handful of contingencies and awards available to competitors throughout this weekends Canadian Triple Treat. Each night, drivers will be competing for an enhanced purse paying $3,333 to the winner and $333 to start. The 14th place finisher each night will also receive $100 from Scorpion Security Products. A points tally will also be kept throughout the weekend, with awards going to the top 5 at the end of night number three courtesy of Fine Touch Collision. 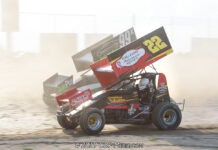 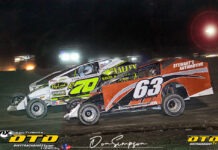