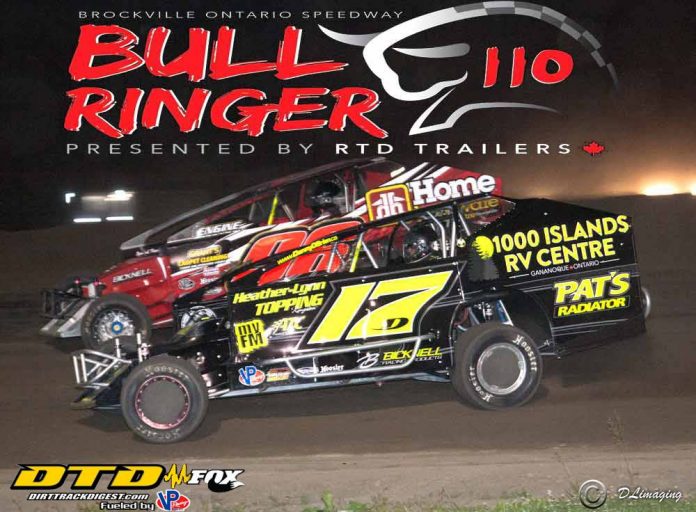 With the first annual “BULLRINGER 110” upon us on Wednesday, August 8, the Brockville Speedway will come alive with some of the best DirCcar 358 drivers in the Northeas.t

Drivers such as Danny Johnson, Mat Williamson, and Stewart Friesen along with local hero Danny O’Brien and Luke Whitteker will make the call to try to take home the $10,000 prize.

The Bullring 110 is a calibration between Paul Kirkland and a close friend who reminisced about the old days and the” Pabst Shootout” from the 80s. They remembered how successful this race was and the popularity it was with fans. Paul explained, “Paul had discussed bringing a similar type of race to the Bullring for the last couple years and finally decided to make it a reality this year.”

With the plan in hand, Paul then had to work on the sponsorship for the biggest 358 Modified race in the history of the Brockville Speedway.


“We approached a relatively new enclosed trailer manufacturer, owned by David Craig, called RTD Trailers. David is also the owner of the very successful Mobile Kitchens Canada. They were eager to jump on board and be the title sponsor of the inaugural BULLRINGER 110, “ Paul explained.

With the race confirmed and sponsorship secured, they decided it best to hold the race mid week as in the past, with the old Pabst Shootout. This avoids interfering with drivers’ schedules and other commitments; they narrowed the date down to the Wednesday, August 8.

With everything in place, the Brockville Speedway will host this inaugural event and is sure to be one of the best races you won’t want to miss.

The day will start out with a meet and greet autograph station starting at noon with two legendary drivers, Stewart Friesen & Danny O’Brien. There will also be live music with a traditional summer BBQ to go along with the afternoon activities.

Free camping on sight for those planning on staying after the race will be available.

Mark your calendar. August 8 will be the premiere of the BULLRINGER 110, presented by RTD Trailers.