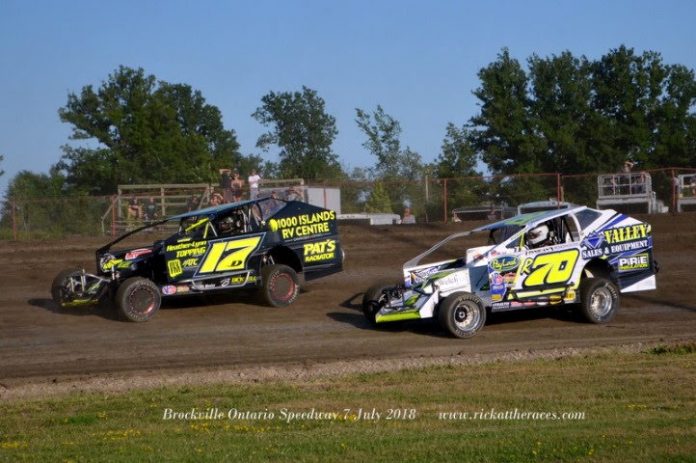 BROCKVILLE, ONT – Short track racers like nothing better than the chance to pocket a huge payday and the $10,000 that is up for grabs in the 358 Modified Series Bullringer 110, presented by RTD Trailers – Wednesday, August 8th – at Brockville Ontario Speedway is one of the biggest of the year. Track owner and promoter Paul Kirkland says he and the team at The BOS are working hard to make sure it’s a memorable experience.

“Its been a while since we’ve had a mid-week special event and this show will establish a new standard for Brockville Speedway,” Kirkland said. “The winner’s share for the Small Block feature and the first place prize money for the Sportsman-Modified ‘A’ main will total $12,000. And that’s right off the top; before anyone else gets to count as much as a dime. We’re expecting some strong car counts in each class and that’s a real plus for our fan base.”

Brockville Ontario Speedway’s weekly action boasts some of the sports most talented racers. Names like multi-time title holder Danny O’Brien, this year’s hot shoe Ryan Arbuthnot, 2017 track champion Luke Whitteker and more continue to make headlines with the 358 Modifieds wherever they run. While Shane Pecore, Johnathon Ferguson, Ryan Scott and the rest of a talented Sportsman-Modified crop grab their share of the spotlight with every racing lap.

“As a track promoter, I know I’m supposed to be impartial but I’d be lying if I said I wasn’t hoping to hand-off the winner’s cheque to any of our Saturday night fan favourites in either division,” confessed Paul Kirkland. “No matter who takes the checkered flag, this show could potentially be one of the biggest single event payouts of a driver’s career.”