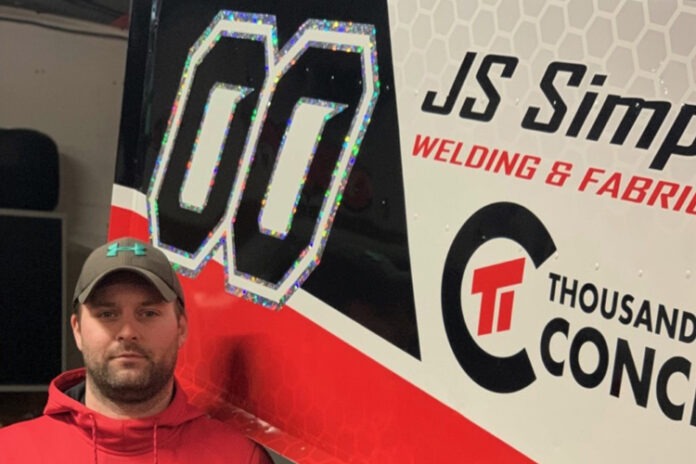 Throughout his tenure in the sport, Ryan Poole has served as an unofficial brand ambassador for hometown racing.

The 37-year-old Mallorytown native – who now makes his home in Athens, Ontario with his partner Ashli and their 2 children – has advanced through the Street Stock, Sportsman-Modified and 358 Mod ranks at area tracks during his career. When the 2021 schedule takes the green flag at Brockville Ontario Speedway, he’ll begin his 19th season of action with a debut in the 1000 Islands RV Crate Sprint Car division.

“I’ve been very lucky to be part of a sport I love and make some terrific friends over the years,” said Ryan Poole, who works as a maintenance plumber with the Ministry of Corrections. “Racing so close to home has been a big plus when it comes to finding sponsorship and support for our team. Many of the backers who help with our program are from the same area where we live and have been involved with my program dating back more than 15 years.”

As he makes the move into the new class, Poole says his primary focus will be on running most of the weekly events on Brockville’s 2021 schedule and depending on how things progress, possibly the August date at Cornwall and some of the shows on the year’s Action Sprint Tour. Never one to make any long-term plans, the driver says he’s even talked casually about hanging-up the helmet a couple of times over the last few seasons but wondered what he’d do if he wasn’t racing or working on the car.

“Because of COVID-19, I only raced once in 2020 and realized that there is a lot to do that doesn’t involve the race car,” admitted Poole. “Away from the track, I enjoy hunting and spending time with family and friends by the pool or at the lake. Summer nights with barbecues and bonfires are always fun. Driving a sprint car was always on the bucket list and with the support I get from Ashli and our kids, I’ll continue a little longer. My father owns my equipment and said that if I could sell the modifieds, we could get a sprint car and give it a go.”

With the 2021 season coming up fast, Ryan Poole; along with his father John, Matt Smith, who has been part of the team since the beginning and former racer Rich Hall have been working hard to get things ready for the first green flag. This year, the No. 00 Sprint Car – in honour racing legend Buzzie Reutimann, who was a Brockville Speedway regular during the 1993 and 1994 seasons and a 1997 Dirt Motorsports Hall of Fame inductee – will be sponsored by JS Simpson Welding & Fabrication, 1000 Islands Concrete, Murdock Cement Finishing, YourTV, King Edward Auto Parts and Dirt Outlaw Apparel. The team also appreciates the contributions of Tommy McMillan from ET Performance and Dave Berry at All Out Performance. Special thanks to fellow racer Shawn Donath for sharing information about sprint cars as they transition from the world of DIRTcar 358 Modifieds.

“I’m looking forward to getting things rolling and learning as much as I can about the new car,” said the driver. “Our team has always been focused on having fun and I think this year will be a blast.”