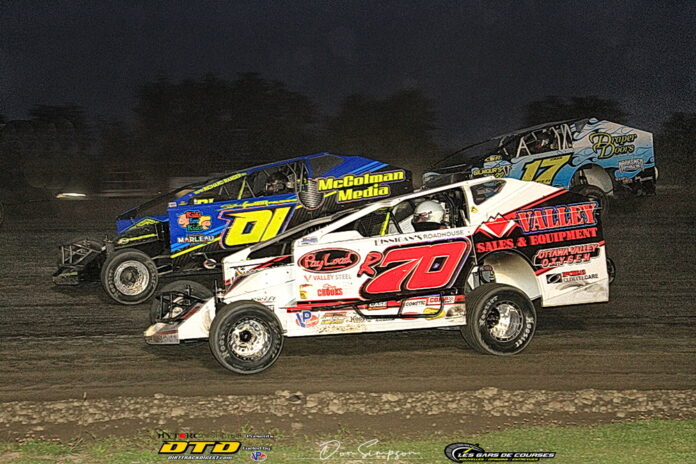 BROCKVILLE, ON – The 2022 season at the Brockville Ontario Speedway has seen everything from familiar faces, first time winners and other drivers having a breakout season. This past week one of those drivers continued their break out season.

Jessica Power has had many multi-win seasons in her career and this season has already won twice. In the 25 lap DIRTcar Sportsman feature she took the lead from early race leader Dan Ferguson from her 4th starting spot. Once in front Power began to pull away in the early laps. Behind her, Ferguson held 2nd but Shane Stearns came from 7th on the grid as he got by Ricky Thompson for 3rd. By the halfway point Power had checked out on the field and was on cruise control. Ferguson and Stearns continued their fierce battle for 2nd however Ferguson was up to the task as he held off Stearns, who appeared to have the faster car. In the end, Jessica Power would continue her dream season, as she lead the final 20 laps and authored a dominant performance to become the first three-time winner in 2022. Dan Ferguson, Shane Stearns, Ricky Thompson and Xavier Andrews rounded out the top 5.

Jarrett Herbison has been running strong all season in the DIRTcar 358 Modified division. On this night he would lead early over Madison Mulder and Kalen Draper in the 30 lap contest. Herbison had a fast car and pulled out to a comfortable advantage, but defending track champion Ryan Arbuthnot was on the move. After starting 7th, the Renfrew native made his way by Mulder for 2nd and ran down Herbison for the lead. Joe Banks, who was running in the top 5, spun in turn 3 but would come back for a 6th place finish. On the restart Arbuthnot kept pace with Herbison. Three laps later it was Arbuthnot to the lead as he started to drive away on the bottom of the race track. Herbison’s shot at a great finish went away, as he slowed in turn 3 while running third. This brought Kyle Dingwall and Chris Raabe into the mix. On the restart it was Arbuthnot in front but Dingwall was giving him all he could handle. Despite several late race restarts, Dingwall and Raabe could do nothing with the leader, as Ryan Arbuthnot would cruise to his 3rd win of 2022. Dingwall and Raabe completed the podium, Tristan Draper rebounded from a tangle with Madison Mulder to finish 4th with Johnathon Ferguson grabbing the 5th spot

Merkley AG Tire and Raabe Racing posted extra money in the Street Stock feature and with that, came a few extra laps as well. Francis Gauthier led early in the 25 lap special over Brighton Speedway invader Jeff Humphry and opening day winner Brett Horner. On lap 6 Humphry took control but Todd Raabe was on the move from 8th as he got by Horner for 2nd. Humphry and Raabe would pull away from the field and began their own battle for position as they put on a show for the fans. On lap 17 a quick yellow for a Maxime Prevost spin, gave the field another opportunity to try and get the lead. When the green flew it was Humphrey and Raabe pulling away with Horner still in contention in 3rd. Over the final laps Todd Raabe tried at will to get the lead but on this night, it was Jeff Humphry taking his first win at Brockville since winning his first career feature at the Fall Nationals in 2019. Todd Raabe, Brett Horner, Brighton Speedway regular Kraig Handley and Peter Raabe completed the top 5.

Shawn Hodge has had some tough luck in the Novice Sportsman division in 2022 and starting on the pole with a fast car gave him a little extra confidence on this night. Hodge would lead early over Paul Donnelly and Sandy MacFarlane. Hodge had the fastest car on the race track in the 12 lap feature as he pulled away with no challengers in sight. Paul Donnelly was having his best night of 2022, as he held 2nd but Sandy MacFarlane closed to try and get by. With the race going caution free, Shawn Hodge would run smooth consistent laps and finally get it done as he scored his first career win. Paul Donnelly, Sandy MacFarlane, Jordan Wood and last weeks winner Mario Dupuis finished 5th.

Mathieu Bardier was the talk of the track this past week as he came into the night looking for three straight wins, but local driver Ryan Poole was looking for his third win of the season, as he drove to the lead, over Luke Stewart and Bardier. Poole was fast on this night as he tried to hold bottom lane through the entire 15 lap affair. In the final laps, the brakes on Ryan Poole’s machine were glowing which allowed Stewart and Bardier to close. But it would not matter as Ryan Poole would claim his third win of the year in the caution free event. Luke Stewart, Mathieu Bardier, Lee Ladouceur, Bryan Cloutier and Tim Bailey would complete the field.

The Vintage division brought 22 cars for the start of the 20 lap feature with Gavin Riddell taking the top spot on lap 3 over Ian Gordon and Paul Billings. Riddell was way out in front and worked his way through the traffic perfectly on this night. Behind the leader Jason Riddell was on the move from 9th as he ran down 2nd place Steve Billings in the closing laps. Gavin Riddell was perfect on this night however, as he scored the win in dominant fashion. Jason Riddell would get by Steve Billings for 2nd at the line, making it a father/son, 1-2 finish. Joey Hilts did a masterful job of driving on this night also. Hilts would collect top honors for a 2nd time in 2022, as the 50s and 60s division winner.

Next week Tackaberry Construction will be on hand as title sponsor and it is autograph night. A special 360 Sprint Car show will take center stage and the Supernant Truck Shop Mini Stocks will also return. The DIRTcar 358 Modified, DIRTcar Sportsman and Novice Sportsman will also be back. Racing starts at 7pm. For all the latest news and updates check out our website at brockvillespeedway.com and don’t forget to give us a follow, on Facebook, Twitter and Instagram. 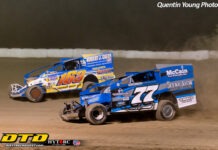