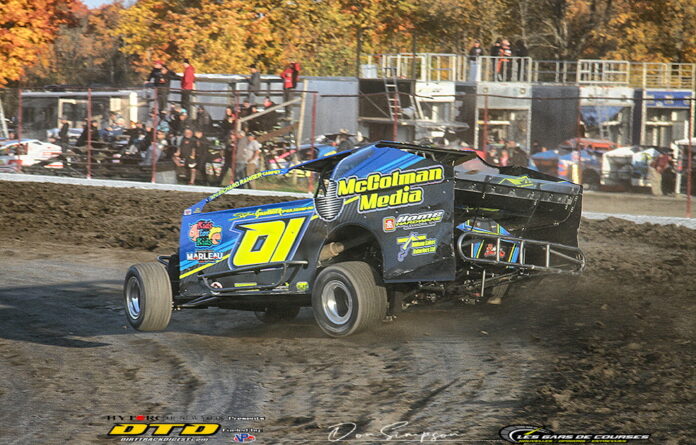 The 25 lap Street Stock feature saw teammates Justin Ramsay and Adam Turner lead the way early on over Ryan Lambert, 2022 Brighton Speedway Thunderstock Champion Tyler French and Cory White making up the top 5 early on. Both Ramsay and Turner were the dominant cars as they pulled away from the field leaving the rest to settle other positions amongst themselves. On lap 17 the first yellow flew as Angie Kirby go turned on the front stretch. On the restart it was once again Ramsay and Turner in control as the rest of the field tried to keep pace. On the final lap going into turn 2 Turner made a bid for the lead but it wasn’t meant to be as Justin Ramsay went on to claim his second career Brockville Speedway Fall Nationals win and first since 2016. Turner held on for second over Ryan Lambert, Tyler French and Cory White.

Shane Pecore led the early laps of the 50 lap Oglvie’s Triple Crown Series for the DIRTcar Sportsman over Sam Charland, Bobby Herrington, Brennan Moore and William Racine. Pecore had a fast car but Bobby Herrington and Brennan Moore were on the move as they charged to second and third and were looking to run down Pecore. On lap 8 Dylan Kirkland saw his chances at a great run go away as a big cloud of smoke came from the back end of his car, ending his night early. On the restart Herrington went to work as closed in on Pecore for the lead with Brennan Moore giving chase from third. On lap 18 Herrington would make the pass for the lead, but Pecore remained within a few car lengths. At the halfway point Pecore would regain the lead but Herrington would not let him get away as they remained within two car lengths of each other on the speedway. On lap 27 Andrew Young brought out the caution as he sailed off of turn 1. On the restart Pecore led the way but Herrington would remain close as he put on the pressure for the top spot. On lap 43 Herrington would make the move for the lead and begin to pull away. The final yellow flew on lap 48 setting up a green-white-checker finish. When the green flew Herrington was able to pull away and maintain a 4 car length lead over Pecore. On this night Bobby Herrington would hang on to score his 9th win of the year and with a mechanical failure from Oglvie’s Series points leader Jessica Power, would also take home his first Oglvie’s Sportsman Series title. Shane Pecore would finish second and would be crowned the Quebec/Ontario Challenge Series Champion. Sam Charland, William Racine and Brenan Moore completed the top 5.

The track changed quickly in the 75 lap Oglvie’s Triple Crown Series for the DIRTcar 358 Modifieds. Chris Raabe would lead the way early over Tim Fuller, JF Corriveau, Carey Terrance and David Hebert. Raabe was running the outside lane and noticed that the bottom became the dominant line and changed his lane quickly while Fuller and Corriveau tried to close in. From this point forward it was a matter of saving the right rear tire as everyone wanted the inside lane on the speedway, making passing very tough on this night. Raabe continued to show the way through most of the race while Fuller tried to figure out the way by the lapped cars and stay within striking distance of the race leader. On lap 62 Carey Terrance would bring out the first yellow as he dropped off the speedway while running in the top 5. Restarts would make things interesting as the outside lane was not as good and Chris Raabe took full advantage when the green flew, holding the lead while Fuller dropped in line for second with David Hebert now moving to third. Over the final 13 laps David Hebert and Tim Fuller tried everything to close in on the leader and lapped cars would help make this happen. On the final lap Raabe was stuck in traffic as Fuller and Hebert closed quickly with Steve Bernier now in 4th. Raabe would hold on to score his first Fall Nationals 358 Modified win at Brockville. Tim Fuller would finish up second while David Hebert’s 3rd place run was enough to claim the 2022 358 Modified Quebec/Ontario Challenge Series title. Steve Bernier crossed in 4th with JF Corriveau 5th. Ryan Arbuthnot finished 8th and would be claim his third straight Oglive’s 358 Modified Triple Crown Series title.

The Eastern Ontario Vintage Stock Car Club saw two features of great racing action. Jason Riddell was the dominant driver in the 70s and 80s division. Riddell took the lead at the drop of the green flag, over Steve Billings, Randy Gaudet, Chad Lackie and Paul Billings. Riddell would go unchallenged and score his third straight win in the division at Brockville this season. Randy Gaudet, Steve Billings, Chad Lackie and Gavin Riddell would complete the top 5. In the 20 lap 50s and 60s division Greg Hale and Pete Stapper had a spirited battle for the race lead with Hale getting the lead and appeared to be well in command. With only 5 laps to go, Hale slid off turn two. As he went to merge on the track on the back stretch, Hale and Stapper made contact, leaving Mason Barkley at the head of the field. On the restart Barkley would hold off a determined Dexter Billings to score his first career win in the division and at the Fall Nationals. Dexter Billings, Pat Charland, Joey Hilts and Pete Stapper would complete the top 5.