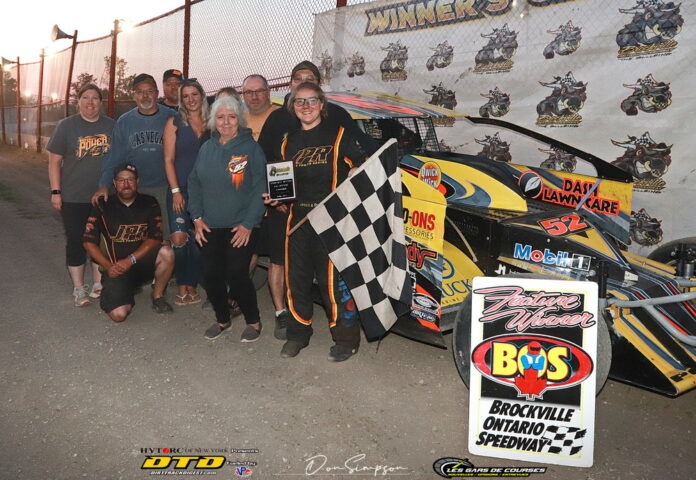 After a 2021 season that saw some success including the 2021 Ogilvie’s Triple
Crown Sportsman Series title at the Brockville Speedway, Jessica Power and her
team worked harder than ever in the off season to come back strong and
challenge for more trips to victory lane and try for that first ever track
championship. The team also made a return as a track regular at the Can Am
Speedway in Lafargeville New York on Friday nights, after missing the last two
seasons due to the pandemic and border restrictions.
The 2022 season was one of the best the team has had with plenty of early
success which put them in title contention for the DIRTCar Sportsman track title
at Brockville. Jessica kicked off the new season the way every driver wants to,
winning on opening day. She took care of that on May 14th at Brockville with her
first win since the 2020 season.
One week later during the held over Brockville Speedway Fall Nationals for 2021,
Jessica made history. After taking the lead late in the 50-lap event, Power broke
through for her first Fall Nationals Sportsman win. With the win she became the
first female driver to win a feature event in Fall Nationals history, but also put
herself as the front runner for the track championship.
Several consistent runs along the way kept her at the head of the class, including
her third win of the season on July 9th. However, some late season bad luck
would see Jessica finish second in Brockville Speedway points and 4th in the
Ogilvie’s Triple Crown Series.
The Can Am Speedway saw Jessica compete against some different competition
but was just as competitive throughout the seasons as she was at Brockville. The
first few weeks of the season saw some struggles but the team rebounded in a big
way finishing in the top 10 a total of 10 times in the final 11 events including
several strong top 5 runs and a best finish of 2nd on July 8th.
Despite not winning a race at Can Am, Jessica turned in a solid season in the 14
events she competed in, with 5 top 5 finishes and 11 top 10 runs, which put her
8th in the track championship standings for the season.
The DIRTCar Sportsman Series turned out very good for the team in 2022. During
the regular season the team competed in regional series races with points
carrying of the overall DIRTCar Sportsman Series championship. Jessica had strong
runs finishing 2nd in the North Canada region and 3rd in the North USA region.
Jessica’s strong runs during the series landed her 5th in the final DIRTCar
Sportsman Series standings.
The team ran very strong during the 50th NAPA Auto Parts Super Dirt Week at the
Oswego Speedway. A strong showing with a second-place effort in her Sportsman
qualifying heat race gave her a solid starting spot in the Chevy Performance 75
Sunday afternoon. On a track that was very demanding, Jessica came through for
her best ever performance in the event, with an 8th place finish.

Overall, the season was a great one for the JPR Racing team and 2023 plans are
still in the works. The team would like to thank the fans and sponsors for all their
support during the year and look forward to continued success next year, with
even more trips to victory lane.