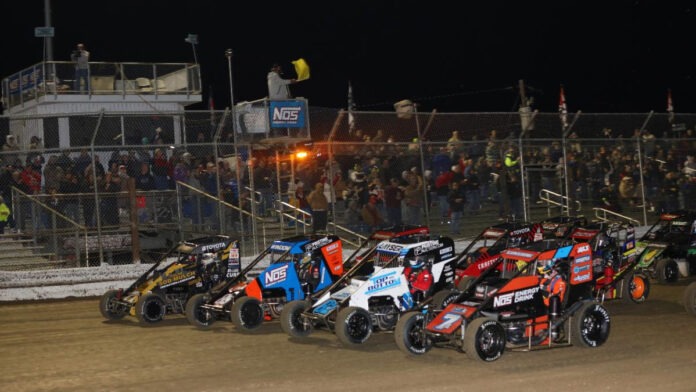 Ten previous USAC National Midget events have been held in the state of Florida with Tyler Courtney and Bob Wente as the only two-time winners. Kyle Larson, Johnny Riva, Chuck Rodee, Bobby Santos, Tanner Thorson and Chris Windom have all each won one in the Sunshine State.


Dave Mac Motorsports brings three to Winter Dirt Games, including a recent addition to the team in Tanner Thorson. Thorson (Minden, Nev.) was victorious in the 2020 Ocala opener, dominating the race en route to the win. He led both nights of action a year ago, running at the front for 37 of the 60 total laps of competition throughout the weekend. The 2016 series champion was cruising to victory on night two at Ocala when he encountered engine problems while leading with just six laps remaining. He was the fastest qualifier on night two in 2020 as well, setting a new one-lap track record in the process at 13.724. Thorson was also 9th and 7th in 2019 at Ocala, the latter of which he won hard charger honors after racing from the 24th starting spot.

Cannon McIntosh (Bixby, Okla.) has rejoined the Dave Mac Motorsports team for 2021. His last outing with the family team in USAC competition came during the 2019 Turkey Night Grand Prix where he finished as the runner-up to Kyle Larson. McIntosh led the first three laps during night two at Ocala in 2020, and finished 5th on each night.

Taylor Reimer (Bixby, Okla) will join both Thorson and McIntosh on the Dave Mac team. The kart and micro sprint veteran is the winningest female driver at Tulsa, Oklahoma’s Port City Raceway and also is a member of the Oklahoma University cheerleading squad.

The most recent occasion the USAC NOS Energy Drink National Midgets invaded Bubba Raceway Park, Chris Windom (Canton, Ill.) reigned victorious, racing from 10th to 1st and earning hard charger honors. He also enters the season as the reigning champion after earning the series title in 2020. The 2020 Winter Dirt Games Midget Passing Master has finished in the top-ten in all four of his Ocala Midget starts, 3rd & 9th in 2019 and 2nd & 1st in 2021. Windom also won the USAC AMSOIL National Sprint Car season opener at Ocala in 2019.

Windom’s CB Industries teammate for Ocala will be 2020 NASCAR Cup champ Chase Elliott (Dawsonville, Ga.) who’ll make his USAC NOS Energy Drink National Midget debut. Elliott has made a few midget racing appearances over the past couple of months in December at North Carolina’s Millbridge Speedway and in January at the Chili Bowl in Tulsa, Okla.

First-time Ocala racers for KKM include Kaylee Bryson (Muskogee, Okla.), one of two female drivers in the field, who’ll be joined by a pair of USAC NOS Energy Drink National Midget Rookie of the Year contenders in Bryant Wiedeman (Colby, Kan.) and Brenham Crouch (Lubbock, Texas).

RMS Racing’s Justin Grant and Thomas Meseraull have never before competed with the USAC Midgets at Ocala, yet both, however, are previous USAC National Sprint Car winners at the track. Grant (Ione, Calif.), won in both 2017 and 2019 while Meseraull (San Jose, Calif.) tamed Ocala in 2016. Grant debuted with RMS by finishing 2nd in January’s Chili Bowl main event. Meseraull picked up his first two career USAC National Midget wins for RMS in 2020.

Petry Motorsports brings a pair of hot shoes in veteran Kevin Thomas Jr. (Cullman, Ala.) and first-time Ocala entrant Emerson Axsom (Franklin, Ind.). Thomas swept both night’s feature victories with POWRi at Ocala in 2018, was 2nd on both nights with USAC in 2019 and was 7th & 4th in 2020. Thomas, the owner of one career Winter Dirt Games win, in a Sprint Car at East Bay Raceway Park in 2015, was also the fastest qualifier with the USAC Midgets at Ocala on the opening nights of both 2019 and 2020.

Jason McDougal (Broken Arrow, Okla.), twice a winner in both USAC National Sprints and Midgets, will make his Ocala debut for Robert Dalby Motorsports. Logan Seavey (Sutter, Calif.), the 2018 USAC National Midget champ, has made four series starts at Ocala with a best result of 8th on night two in 2019. He’s joined the Tom Malloy team for 2021, a car which won three races with Thorson down the stretch a year ago. One-time USAC National Midget winner Steve Buckwalter (Royersford, Pa.) returns to Ocala after a pair of starts last year with Brian Buckwalter’s No. 25B.

Jake Neuman (New Berlin, Ill.) and Robby Spino (Wallingford, Conn.) will each make their Winter Dirt Games USAC Midget debuts in a pair of Jim Neuman owned machinery. Neuman, however, compete in two POWRi Midget events at Ocala in 2018, finishing 6th and 7th on back-to-back nights. Spino is a veteran of both NEMA and USAC Dirt Midget Association competition.

Sam Johnson Racing announced its expansion to a two-car effort for himself and Austin Barnhill for the 2021 USAC National Midget season. Johnson (St. Peters, Mo.) is a veteran of 24 series starts since 2018, and he returns to Ocala for the first time since 2019 where he made a couple starts, capturing a semi-feature win on the first of the two nights. Barnhill (Wilmington, N.C.) is a veteran of karts and micro sprints. Ocala will be his first career USAC appearance.

Oliver Akard (Fort Myers, Fla.) is the lone Floridian in the field. He finished 15th and 14th a year ago in his first two career series feature starts. Andrew Felker (Carl Junction, Mo.) will make his first Winter Dirt Games showing this weekend. The 2012 POWRi and 2019 POWRi West Midget champ competed twice with the series at Ocala in 2018, finishing a best of 7th. Daniel Robinson (Ewing, Ill.), a veteran of USAC Midget and Silver Crown racing, will, likewise, be a first-time Winter Dirt Games racer in 2021.

Ethan Mitchell (Mooresville, N.C.) is an Ocala USAC Midget veteran, making two career starts between 2019 and 2020 in the event. His counterpart on the Bundy Built Motorsports team for Ocala will be Max McLaughlin (Mooresville, N.C.) who aims to make his first USAC start after making a handful of appearances with Keith Kunz/Curb-Agajanian Motorsports a year ago. McLaughlin is the son of northeast modified and NASCAR Busch Series standout Mike McLaughlin.

A pair of Rookie of the Year candidates will compete for Reinbold-Underwood Motorsport with Hayden Reinbold (Gilbert, Ariz.) and Chase Randall (Waco, Texas) making their initial forays to Winter Dirt Games. Reinbold made four USAC starts in 2020 while Randall made seven.

The second half of WDG brings on the beginning of the USAC AMSOIL National Sprint Car season Feb. 11-12-13 at Bubba Raceway Park. A practice night on Feb. 10 for the series precedes three consecutive full nights of racing.

Race day tickets will be available at the gate on race day. No pre-order is necessary.