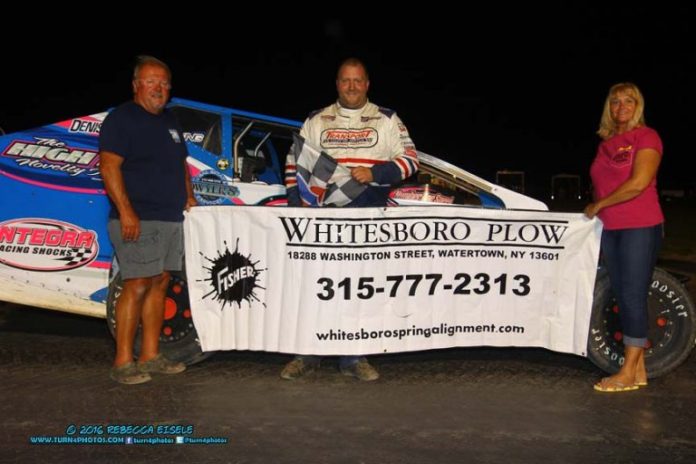 LAFARGEVILLE, NY – 6 classes provided plenty of action as the 358 Modifieds, Sportsman Mods, Empire Super Sprints, Pro Street Stocks, Thunder Stocks and Vintage Modifieds welcomed a new era for Caprara’s Can Am Speedway and closed-out the 2016 season – Saturday, September 10th – with the Clash at the Border.

With Shawn Kirby and Jerrod Radley leading the way, the Pro Street Stocks rolled from the staging area for the Tim Clark Memorial 25 lap feature. Kirby and Mike White used the inside line to gain and early advantage, but the #45R of Preston Forbes – who had started 3rd on the grid – took to the high-side and was looking for an advantage. The lead duo started to catch the backmarkers with 4 laps on the scoreboard and White briefly grabbed the lead with a pass off the second turn. The pace was slowed for a yellow in turn 2, just as the crossed flags were displayed. Forbes moved into 2nd on the restart and took the lead with a lap 21 pass. He maintained the advantage and survived a green, white checkered finish to take the win over White and Kirby. Sid Harmer Jr. and Tiger Chapman completed the top 5.

Taylor Caprara and Brian Hudson paced the pack of Sportsman Modified machines to the stripe for their 30 lap headline dance. Dave Rogers – who started 4th – took to the high-side of the spacious half-mile and grabbed the lead with just a trio of circuits complete. The field was catching lapped traffic with just 6 laps in the book, with the pace slowed for a pair of quick yellow flags on laps 8 and 10. Rogers – along with Tyler and Jack Meeks – were all using the outside line, pushing their right-rear tires against the cushion and pulling away from the field. A lap 18 caution brought the pack back together and Tyler Meeks snatched the lead from Rogers on the ensuing restart. The driver of the #28 endured another green, white checkered finish for the win over Rogers. Caprara slipped into 3rd, with Jack Meeks and Josh Reome finishing-out the top 5.

With 25 laps on the agenda, the Empire Super Sprint ‘A’ main had Paulie Colagiovanni and Jonathan Preston on the front row. Colagiovanni showed his strength from the drop of the green flag, but Steve Poirier was charging hard from his 5th starting spot and took advantage of some lapped traffic to move into 2nd with 10 laps on the board. A yellow just 2 laps later brought the field back together and Poirier took the lead on the restart, but his fight wasn’t over. Colagiovanni had slipped to 3rd, but Pennsylvanian Mark Smith – who had started 10th – was running some of the night’s fastest laps. Smith would battle hard with Poirier, but had to settle for second place at the checkered flag. Colagiovanni was 3rd, with Matt Tanner and Shawn Donath completing the top 5.

It was a 30 lap battle for the 358 Modifieds, as Billy Dunn and Rylee Gill occupied the front row. Dunn took the lead early and had more than a 10 car length advantage when he started working through lapped traffic as the scoreboard showed 13 laps complete. Rylee Gill was running comfortably in second spot, with Josh VanBrocklin 3rd when the yellow flag flew for an issue in the 3rd turn, with 21 circuits down. Corey Wheeler moved into the runner-up position during the closing laps, with Ryan Arbuthnot taking 3rd, but no one had anything for Dunn, as the former Super Dirt Week champion claimed the winner’s payday. VanBrocklin and Gill chased the top 3 finishers to the line.

Paul Pekkonen and Aaron Pugh led the way for the Eastern Ontario Vintage Modified 15 lap feature event. Pugh looked inside and took the lead as the field scored the first lap. Pekkonen was back in charge a couple of laps later and wouldn’t relinquish the lead. Pugh held-on for 2nd, with Paul Billings, Ryan Comeau and Steve Billings finishing-out the fast 5. Pekkonen also collected the cash bonus bounty on John Stanley – the dominant driver in the club’s Can Am events – who finished 6th.

To close-out the night and the 2016 campaign, Phil Desormeau III and Dakota Bechler brought the 16 Thunder Stock starters to the green flag for their 20 lapper. Desormeau took an early lead and survived a rash of early yellow flags, before surrendering the spot to eventual winner Chuck Monica. Desormeau, Matt Marcinko, Trenton Passage and Bechler completed the top 5.

Can-Am Clips: A strong crowd through the general admission grandstand gates helped 50/50 ticket sales and pushed the winner’s share of the nightly draw to almost $950…Strong car counts – of over 130 for the combined 6 divisions – brought back the feel of the former mid-summer ‘Pabst Shootout’ events that also featured 358 Modifieds and Sprint Cars in seasons past…Out-going track promoter Tiger Chapman thanked the crowd for their support during his 7 season at the helm, then showed his appreciation with a massive fireworks display prior to the 358 Modified feature…With flashes of lightning and strong winds all-around, track officials checked the weather radars and went into hurry-up mode to dodge a fast-moving front. Several victory lane celebrations were delayed and even though there was heavy rain falling less than 20 minutes away from the track, the full show was completed with only a brief, light shower – that came and went earlier in the afternoon – before a car hit the racetrack.