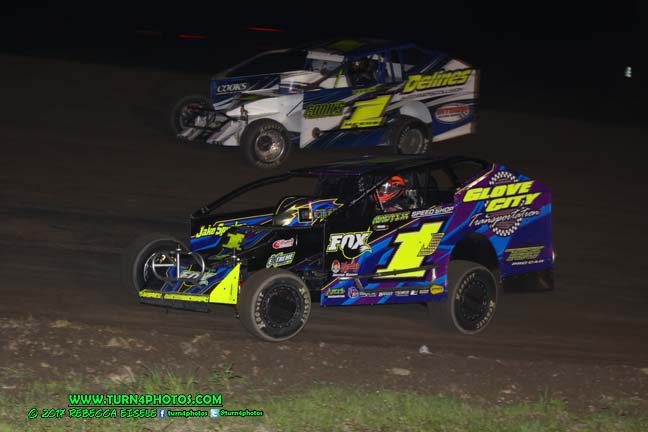 It was a rare mid-week contest at Caprara’s Can-Am Motorsports Park in Lafargeville, NY, with GRIT Sportsman Modifieds invading the half-mile track on a Tuesday. In addition, three other classes tested their mettle, making for an exceptional night of racing. The $1500 GRIT Sportsman payout brought in racers from far and wide to compete at the track, located just a few miles from the Canadian border. Thirty-seven cars entered the heat races for the GRIT Sportsman event, with twenty-four qualifying for the race. Rocky Warner, from Gloversville, NY, in the number 1J, was the big winner in the GRIT Sportsman feature. It was a hard fought battle against 1 Jack Meeks, with the lead in play right down to the final lap. Other winners on the night included 26M Phil Desormeau III in Thunderstocks, 3k Shawn Kirby in Pro Street Stocks and 57H Remington Hamm in the Novice Sportsman class.

GRIT SPORTSMAN MODIFIED – The big feature race of the night, the GRIT Sportsman Modified class hit the track next. Twenty-four cars vied for the $1500 prize, with 1J Rocky Warner and 621 Brian Hudson starting in the top two positions. Row two had 1 Jack Meeks and 57 Anthony Stockman in starting positions three and four. Warner grabbed sole possession of the lead immediately, with Meeks moving into second and Stockman grabbing third moments later. M1X Dave Marcuccilli moved up from eighth to fourth by lap five, supplanting 60 Jackson Gill, who settled into fifth. The top five leaders stretched out around half the track by lap seven, with 1J Rocky Warner extending several car lengths between himself and a hard charging 1 Jack Meeks. A lap eight caution brought everybody back together, but Warner was able to retain his lead, with Meeks in second. 57 Stockman and M1X Marcuccilli battled it out for third, with Marcuccilli gaining the advantage by lap nine. 44 David Rogers moved up from tenth to fifth by lap ten, pushing 60 Gill out of the top five. By lap thirteen, Rogers was working on 57 Stockman for the fourth place position. But Rogers had issues of his own, with 21 Taylor Caprara working into the mix, challenging for fifth position. A lap fifteen caution destroyed all leads, and brought the drivers back together for a restart, with 1j Warner in the lead, 1 Meeks in second and M1X Marcuccilli in third. On the restart, 44 David Rogers got caught up with in a melee with Stockman and came to a stop on the back straightaway, after going up over the berm in turn two. Rogers was able to return to racing at the back of the pack before racing resumed, as was Stockman. With the vacated positions at the front of the field, 21 Taylor Caprara moved into fourth and 34r Kevin Root took fifth. Caprara moved up on the restart taking third away from Marcuccilli. 0 Shane Pecore moved into fifth in lap seventeen. In lap nineteen, 21D Robert Delormier went for a wild ride, ending up on his side through turn one. Flames broke out on the vehicle as safety personnel arrived to assist. The fire was quickly extinguished and Delormier climbed from the vehicle. As racing resumed, it was 1j Warner, 1 Meeks, 21 Caprara, M1X Marcuccilli and 0 Pecore in the top five positions. Warner fired off into the lead, with Meeks right on his heels. Another caution in lap twenty-two brought a pause in racing. Warner and Meeks managed to retain positions one and two, while Marcuccilli edged Caprara for third. 9x Tyler Trump moved into fifth position after passing up 24k Nick Krause. 44 David Rogers, meanwhile, moved all the way back to seventh position with two laps remaining. At the checkered flag, it was 1j Rocky Warner, 1 Jack Meeks, M1X Dave Marcuccilli, 21 Taylor Caprara and 9x Tyler Trump in the top five positions.

PRO STOCKS – The first feature of the evening had 14R Sid Harmer Jr. and 32 Ryan Shanahan starting in positions one and two. 62 Jonathan Murphy and 3k Shawn Kirby were right behind in positions three and four. 3k Kirby wasted no time pulling into second position, while Harmer put distance between him and the rest of the pack, as the leader. 3 Rick Dusckas moved from sixth to third by lap two, but trailed the two leaders by multiple car lengths. A lap six caution brought the field back together for a two-wide restart. Harmer grabbed the lead once again, on the restart, and Hamm pushed his way into third, running the high line around the track through lap seven. Meanwhile, 1x Mike White moved up into fourth by lap nine. Hamm made his move for second position in lap eleven, but Kirby powered through the turns to keep him back. Kirby found speed high on the track, squeezing past Harmer in lap thirteen. Hamm followed his lead, taking second position from Harmer a lap later. But two laps later Hamm got loose in turn four, allowing Harmer to retake second. 1x Mike White wasn’t satisfied in fourth position, moving past Hamm in lap seventeen for third. By lap twenty, the leaders had to negotiate lapped traffic. The top three cars were able to squeeze by, but Hamm and Dusckas got caught up with the lapped cars, and lost major ground. At the checkered flag, it was 3k Shawn Kirby, 14R Sid Harmer Jr. in the top two positions with 1x Mike White in third, 13 Kenny Hamm in fourth and 3 Rick Dusckas rounding out the top five. The victory marked the second victory in four days for Kirby at Can-Am.


THUNDERSTOCKS – Four-cylinder fury in the form of the Thunderstock class roared onto the track next, with 17 Pat Sullivan and 2s Gary Sharlow starting in the top two positions. 17B Mike Greenfield and 16 Matt Marcinko started in positions three and four. Regular track winner, 26M Phil Desormeau III started in sixth. 17B Greenfield and 16 Marcinko captured the top two positions, jockeying for position, with 26M Desormeau attempting to thread the needle, but not quite succeeding. As a lap two caution came out, 17B Greenfield spun out 26B Dakota Bechler in an exhibit of a little extra curricular activity. As racing resumed, 26B Bechler and 26M Desormeau powered past Greenfield and challenged Marcinko for the lead. Desormeau grabbed the lead, while Marcinko had his hands full trying to keep Bechler in the rearview. 42 Lyle Robinson didn’t want to be left out of the fun, putting pressure on Bechler and Marcinko for the second position in lap five, when a caution brought them back into side-by-side formation for a restart. Robinson managed to snag second position on the restart, with Marcinko right on his tail. Desormeau was out in front by five car lengths by lap six. 60 Francis White moved up from the back of the pack to seemingly challenge Marcinko for third, passing him in lap eight. White picked off Robinson next, and looked to gain on the leader, Desormeau, by lap nine. In lap twelve, White went high and Desormeau stayed low, giving White the open door he needed to grab onto, what appeared to be, the lead. Lapped traffic proved to be an obstacle for Desormeau, who lost ground on White through lap thirteen. One lap later it was Desormeau who used lapped traffic to his advantage to pass White. At the checkered flag it was 26M Phile Desormeau III in first, 42 Lyle Robinson in second, 26B Dakota Bechler in third, 32 Chuck Monica in fourth and 16 Matt Marcinko in fifth. A post race review showed that Francis White had entered the race late, during lap two, after the caution, thus placing him a lap down from the leader. It was an expert con by the number 60, who was placed eleventh in the official finish results.

NOVICE SPORTSMAN – 7s Shaun Shaw and 57H Remington Hamm started in first and second positions, with 18 Gavin Eisele and 76G Skylar Greenfield in third and fourth starting positions. It was an ugly start, with 6 Matt Brown and 18 Gavin Eisele getting tangled up before reaching the flag stand on the start, brining out a lap one caution. When racing finally got underway, 57H Hamm shot out to the lead, with 88c Xavier Andrews moving up from sixth to second by lap two. 7s Shaw settled into third, while 73 Kevin Poitras took over fourth. The top four cars moved half a track away from the rest of field by lap six. 22 Josh Verne moved up from tenth to fifth by lap nine, but he had a long chase to catch up to the fourth position. 88c Andrews closed the gap on the leader, Hamm, by lap twelve, but could not close the deal, catching Hamm in the corners, but losing ground on the straightaways. On the final lap, Andrews dove low to attempt a pass, but had to back off as Hamm slammed the door. At the checkered flag it was 57H Remington Hamm with the win, 88c Xavier Andrews in second, 7s Shaun Shaw in third, 73 Kevin Poitras in fourth, and 22 Josh Verne finishing in fifth. 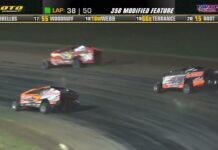