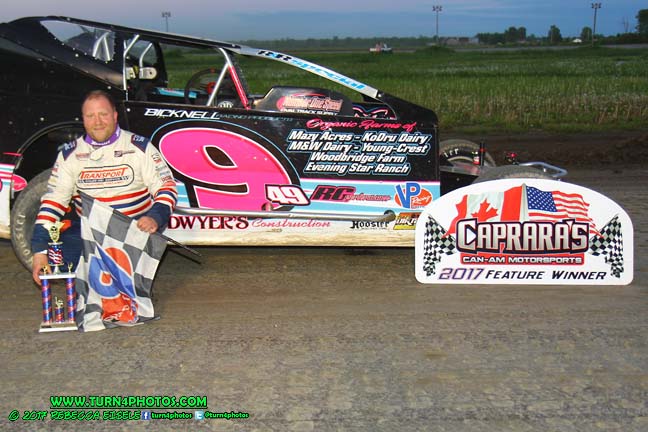 After a disappointing start to the season for fans of local dirt track racing, the action is heating up at the “Nasty Track Of The North”. Beautiful weather on this Memorial Day weekend made for great track conditions and plenty of close racing on the famed half-mile.

The man on the move was Billy Dunn, returning after a rough start in the 2017 opener when electrical problems hampered their efforts. After a hot laps session during Tuesday’s show, the car looked ready to run, and run it, he did. Chuck Monica took the Thunder Stock victory in the 32. In the Sportsman Modifieds, Kevin Root brought the 34r car home in the top spot. The Novice Sportsman win went to Remington Hamm in the 57h. Shawn Kirby took the win for the Pro Street Stocks in the 3k.

Feature events kicked off with the Thunder Stocks. Jerry Rogers and O.J. White had the top spots at the green. Gary Sharlow brought out the yellow at lap 1. The battle was out front as defending champion Phil Desormeau and Justin Pope raced for the top spot. Monica rode in third and White in fourth. Desormeau took a deep line in turn 3 forcing him in to the infield in 4, and taking him out of competition. After the yellow, the restart found Pope with a comfortable lead but Chuck Monica managed to get the 32 car close behind. Pope led 14 laps, but on the last lap, Monica made a move in turn 3, setting him up for a solid run off turn 4 and grabbing the checkers at the line. Pope finished a close second and Ike Stone took third.


Sportsman feature action up next as 30 cars made the call for their 25 lap event. Root and Stockman made up the front row at the start. Stockman had the advantage at the start and led the first two laps. Root grabbed the lead on lap 3. The caution flew at lap 4 with the 22 of Josh Verne stopped on the backstretch. Stockman and Root lined up once again on the front row. At the green, the 34r hooked up and Stockman settled in for second. Zack Sabotka worked his way up to fourth from tenth and went to work on Srockman. Caprara followed Sabotka up through after starting deep in the field. Stockman dropped back to fourth with Jordan Kelly close behind. Lap traffic slowed Root as he made his way through but a caution at lap 22 for Eric Nier in the 34 closed up the field once again. Root had clean air for a fast restart leading to the end and taking the win, Sabotka came across second and Caprara third.

358 Modifieds came out for their feature go with 15 cars making up the field. The green dropped with Rylee Gill and Nick Webb out front. Gill hung on to lead lap one, but Billy Dunn was on a rail, bringing his number 9 machine to the top spot by lap 2. Gill settled in for second as the battle for the third spot heated up. Tyler Bartlett had the 39 working well, and kept the edge over Ryan Bartlett in the 93. Jordan McCreadie made several attempts to crack the top 3 but the Bartlett cars kept him just inside the top 5. Brandon Sweet took the 24 car off at lap 16 with mechanical issues, At the Finish, Billy Dunn grabbed his first win of 2017, Rylee Gill hung on for the runner up spot and Tyler Bartlett came home third.

The Novice Sportsman division brought out 10 cars for their feature event. The green was up with Matt Brown and Gavin Eisele leading the way to turn 1. Jamie Brown brought the 15 car up front and led the first 3 laps. Caution came on lap 4 as contact between several cars left debris on the track. The field gathered up and at the restart, Gavin Eisele was showing some speed. Hamm in the 57h moved up from 5th starting spot to take the lead. Eisele came up to lead lap 8, but an aggressive pass on the inside put Hamm back in the top spot. After 15 laps, Hamm crossed the line for the win making it two in a row, Eisele took second and Matt Brown took third.

The final feature of the night was the Pro Street Stock event. Sid Harmer Jr and Ryan Shanahan took the green together out front. Harmer lead the field down to turn 1. Rick Duskas and Dustin Bradley battled for third as they moved up on the 32. Shawn Kirby hung out in 5th waiting for an opportunity to grab any spot he could get. The race for the top 5 spots continued as Kirby moved up one more spot behind the 3 of Duskas. Shanahan dropped back to fourth with Mike White close behind. Kirby worked his way to the runner up spot as Harmer continued to lead the pack. When the white flag flew, Kirby knew it was now or never. The 3k powered past Harmers 14r and with a side by side run in to turn 3, it was anyone’s race. Kirby held the line through turn 4 and took the win on a last lap pass, making it three in a row for 2017. Sid Harmer Jr took the runner up spot and Rick Duskas grabbed third.