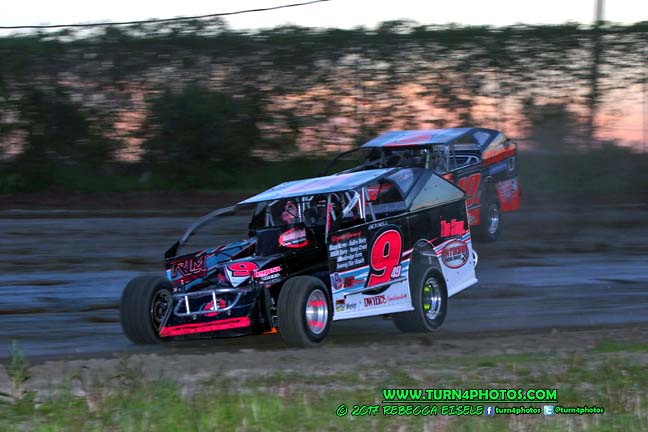 LAFARGEVILLE, NY – Another action filled Saturday night of racing action kicked off at the historic half-mile putting some new faces out front in almost all divisions. The track didn’t cooperate with many of the driver’s set-ups, leaving some seasoned veterans looking for a line. The continuous breeze and sunshine made the track dry out quick in the heats, but come feature time, the corners got sticky down low, and everyone running the bottom and middle left little room to race up top.

NOVICE SPORTSMAN –
Trevor Gibbons would set the pace as the field came around for the green. Matt Brown Started outside pole, and would jump to an early lead on lap one. Caution flew as the 57h of Remington Hamm took a ride over the bank in turn 2. When the action got going again, a tangle with the 621 and the 0 of Joe Wilcox brought the yellow out again at lap 10. Matt Brown would continue to open up space over the 76g of Greenfield. Jamie Brown brought the 15 car up to the runner up spot, but didn’t quite have enough to challenge for the lead. Contact between the 57h of Hamm and the 76g of Greenfield in turn 3 would end up with Hamm facing the wrong way, and the yellow flew on lap 14. The green dropped with one to go, and Brown hung on for the win. Jamie Brown brought the 15 home second, and Greenfield’s 76g crossed third.

PRO STREET STOCK –
Ryan Shanahan and Sid Harmer Jr started the feature out front with Kenny Clark and Rick Duskas in the second row. The green flew and Harmer ran hard to turn one with the 14r, grabbing the lead early. Kenny Hartshorn, Rick Duskas and Shawn Kirby battled throughout the entire race for the runner up spot. One caution at lap 17 for the Clark 55 bunched the field up, but once again Harmer would put the power down and open up the lead. Hartshorn would continue to swap spots with Duskas and Kirby. At the checkers, Sid Harmer Jr took the win with Kenny Hartshorn second, and Rick Duskas third.

358 MODIFIED –
Nick Webb and Josh VanBrocklin lead the field to green with Luke Stewart and Rylee Gill close behind. The 10 car was hooked up and seemed unstoppable, leading the first 17 of the 25 lap feature. Watching the transponders, it was obvious that Dunn was getting faster every lap and was quickly making his way to the front. The R70 of Ryan Arbuthnot battled his way to the top 3 from tenth starting spot, following Lance Willix up through the pack. Arbuthnot would make a pass on Willix and hold third. Dunn worked his 9 machine up to the runner up spot and continued to close on VanBrocklin. Lap 18, Billy Dunn took the lead as VanBrocklin dropped back to second. At the line, Dunn took win number two for the season, with Josh VanBrocklin coming home second and Ryan Arbuthnot coming home third.

SPORTSMAN MODIFIED –
A full field of Sportsman cars took the green with Mike Gadbaw and Rick McCready leading the pack. Andrew Wren had the 415 car figured out as he quickly took the lead on lap one. Haiden Burdick and Mike Prentice got together in turn 2 with Burdick’s mount ending up on top of the 72 of Prentice bringing out the yellow on lap two. When action resumed, Anthony Stockman brought the 57 car up front to battle for the lead, but a caution at lap 6 would hold him off. Justin Gadbaw would need to be towed off from turn 4. At the restart, Stockman grabbed the advantage and took the lead on lap 7. The caution came out again at lap 8 for the 2 of Chris Thurston, stopping in turn 3. Stockman’s night would end at lap 9 as the caution flew once again when the M1 of McCready spun in turn 4. The 57 car was pushed off with mechanical problems. Jack Meeks, who started in sixteenth position, had patiently picked off cars one at a time to the second spot. With Stockman out, Meeks would have the lead. At the green, the 1 car would lead the final laps. The caution was out at lap 17 when the 60 of Jackson Gill went over the bank at the bottom of turn 4. The final laps dragged out with a few cautions for various mechanical problems, sending the 25 of George Sanford, the 5 of Amy Holland, and the 30r of Dave Rogers to the pits. Meeks would take the win, with Kevin Root working his way up to the runner up spot, and a hard fought third for Taylor Caprara.

THUNDER STOCKS –
Jerry Rogers and A.J. StMary started out the race with Gary Sharlow and O.J. White in the second row. The caution came out at lap 2 with Phil Desormaeu’s night coming to an end. Mechanical issues took the 26m to the pits for a second week in a row. Chuck Monica wheeled the 32 car up to the top spot with the 60 of Justin Pope tagging along. Monica spun out on lap 9 and ended up at the top side of turn 2. At the restart, Pope took the advantage as Monica worked his way up through the slower cars. There wasn’t quite enough laps for Monica to make his way to the front spot. Justin Pope would go on to take the win, Monica second and Mike Greenfield took third.

Racing action resumes June 10th at Can-Am with the Eastern Ontario Vintage Stock Car Club making their return to Lafargeville for the first time in the 2017 season. Grandstand opens at 4, racing at 6pm.