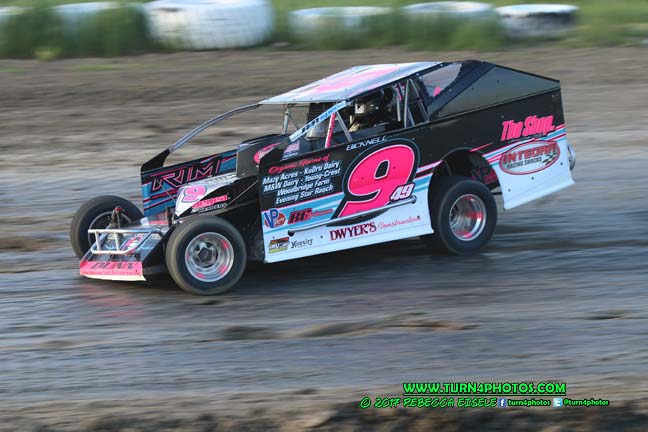 LAFARGEVILLE, NY – Billy Dunn continued his winning ways at Caprara’s Can-Am Speedway in Lafargeville, NY, in the Modified 358 class. Dunn had to fight off a last moment challenge for the lead from Jordan McCreadie after a late caution destroyed Dunn’s sizeable lead and put McCreadie right on his back bumper for a restart. Dunn had started in ninth position, but made his way to the lead fairly early in the race. It was clean racing through the middle laps, with Dunn walking away from the field. But several late cautions made racing interesting as both Jordan McCreadie and Ryan Bartlett had also moved through the pack and challenged for the lead. In the end, Dunn ran another brilliant race and rolled to victory lane.
Anthony Stockman took home the win in the Sportsman Modified class, having to fend off a strong charge from Josh Reome. Stockman rose from sixth position at the start to the lead by lap eight, and never relented. Several cautions gave other racers ample opportunity to go after the lead, but Stockman slammed the door time and again and raced his way to own the checkered flag.

Sid Harmer Jr. looked like he was shot out of a cannon in the Pro Street Stock class, moving up from a fifth position start to take the lead early in the race. He managed to put plenty of distance between himself and the rest of the pack and avoid caution restarts throughout the race to make his way to victory lane.

Other winners on the night included Chuck Monica in the four-cylinder Thunderstock class and Gavin Eisele in the Novice Sportsman class.

The Thunderstock feature had 2s Gary Sharlow and 26M Phil Desormeau III in the first and second positions. It took no time at all for 26M Phil Desormeau III to pull out to a commanding lead. Behind him, racers went three wide, vying for the second position. After a lap two caution, Desormeau retained the lead, but 60 Justin Pope wan maneuvering to challenge from the second position, after starting fifth. 16 Matt Marcinko moved up from seventh starting position to third by lap four, and then grabbed onto second place after passing Pope in lap five. 32 Chuck Monica was right on the bumper of Marcinko, and was angling to pass when a lap seven caution brought the field back together for a restart. Pope, Marcinko and Monica went three wide on the restart behind Desormeau. Monica gained the advantage taking over sole possession of second and challenging Desormeau for the lead by lap seven. Pope settled into third, with Marcinko in fourth. A lap later, Marcinko made his move and grabbed third away from Pope. Monica dove low in turn one of lap twelve to snag the lead from Desormeau. Marcinko went high a lap later to dislodge Desormeau from second position. On the final lap, a caution flag for a stopped car in turn four brought the field back for a green-white, checkered restart. On the restart 32 Monica retained the lead, while Desormeau pushed past Marcinko. But at the checkered flag it was 32 Chuck Monica in first, 16 Matt Marcinko in second by a front bumper, 26M Phil Desormeau III in third, 4 Jesse Bender in fourth and 5 Don Woodworth in fifth.

SPORTSMAN MODIFIED:
Thirty-two cars started the feature race for the Sportsman Modified class. 25 George Sanford and 34 Eric Nier started in the top two positions, while M-1 Rick McCready and 60 Jackson Gill started in positions three and four. 25 Sanford retained the lead through lap one, with Nier remaining in second for a lap or so. 57 Anthony Stockman made his move early, jumping up second place after starting sixth, supplanting Nier. A lap four caution gave Stockman the chance he needed to grab the lead away from Sanford. 91 Josh Reome moved from seventh to third by lap seven, even as Stockman continued to increase his lead away from the rest of the pack. Sanford was able to take back second place just as a lap eight caution destroyed the Stockman lead, and forced a side-by-side restart. Stockman managed to keep the lead off the restart, while Sanford fell back to third a lap later after 91 Reome made a pass on the high side through turn four. 34R Kevin Root and 25 Sanford battled back and forth for the third position, with Root gaining the advantage and sole possession of third by lap sixteen. Reome was gaining on Stockman by lap eighteen when a caution flag brought the field back together for a restart. 21 Taylor Caprara had quietly moved through the field, settling into fourth position by lap nineteen after starting seventeenth. On the restart Stockman retained the lead, with Reome just behind. Root and Caprara were forcing the leaders to make zero mistakes as they were right on the back bumpers of the leaders. Reome made contact with Stockman on the back straightaway in lap twenty-one and had to back off, giving up positions to Root and Caprara. At the checkered flag it was 57 Anthony Stockman with the win, 34R Kevin Root in second, 21 Taylor Caprara in third, 91 Josh Reome in fourth and 44 David Rogers in fifth.

MODIFIED 358:
Fifteen cars rolled onto the track for the Modified 358 small block feature. 51 Brady Gill and 27W Nick Webb started in first and second positions. 24 Brandon Sweet and 19 Luke Stewart started in third and fourth positions. Regular Can-Am winner in the 358 division started in ninth position. Nick Webb got the hole shot to the lead out of turn one. 93 Ryan Bartlett moved into fifth by lap three, after starting eighth, but Billy Dunn was on the move as well. By lap four, it was Dunn leap frogging from sixth into fourth position, with Bartlett right behind him. A lap six caution brought the field back together for a restart, putting Dunn within striking distance of the lead. Dunn made his move a lap after the restart, grabbing second position away from 51 Gill, setting his sights on the Nick Webb and the lead. By lap nine, 9j Jordan McCreadie had moved into third position, while 93 Ryan Bartlett moved back into fourth and was challenging Webb and McCreadie. A lap later McCreadie had pulled ahead of Webb for second place, though Dunn was putting major distance between himself and the pack as the leader. By lap fourteen, Bartlett had taken sole possession of third, with Webb sliding back to fourth. With just three laps remaining, a caution came out as 57 Rylee Gill came to a stop on the infield in front of the grandstands. The caution destroyed the sizeable lead by Dunn, and setup a frenetic finish with 9j McCreadie and 93 Bartlett both ready to leap on any misstep by the leader. Dunn wasted no time at the drop of the green, retaining the lead, but McCreadie was hot on his tail. Meanwhile 28 Tyler Meeks grabbed third. At the checkered flag it was 9 Billy Dunn with the win, 9j Jordan McCreadie in second, 28 Tyler Meeks took third, with 93 Ryan Bartlett in fourth and 27W Nick Webb finishing fifth.

PRO STREET STOCKS:
83D Dustin Bradley and 32 Ryan Shanahan started the Pro Street Stock feature in the top two positions, with 4 Mike Durham and 1x Mike White in third and fourth positions. After one lap, it was Shanahan in the lead, but 14R Sid Harmer Jr. was charging hard from his fifth starting position. The 14R managed to take control of second place by lap three. 3k Shawn Kirby moved from eighth to third by lap five, passing up 1x Mike White for the position. White took it right back two laps later, and both White and Kirby angled to supplant 32 Shanahan from second position. White got by in lap nine, leaving Kirby and Shanahan to battle for third. 3 Rick Dusckas wanted in on the action, riding close behind Kirby as he passed Shanahan in lap twelve. Dusckas got loose on the back straightaway and did all he could to keep the car from a full spin out. Dusckas lost two positions on the track, but managed to prevent disaster. Sid Harmer Jr. was far in the lead with just two laps remaining, with Mike White in second and Shawn Kirby in third. They’d stay that way to the finish line. At the checkered flag it was 14R Sid Harmer Jr. with the win, 1x Mike White in second, 3k Shawn Kirby in third, 32 Ryan Shanahan in fourth and 3 Rick Dusckas finishing fifth.

NOVICE SPORTSMAN:
The final feature on the night had 76G Skylar Greenfield and 18 Gavin Eisele in the top two starting positions. 15 Jamie Brown and 6 Matt Brown started in third and fourth positions. At the drop of the green, Greenfield charged out ahead of the rest of the pack through lap one, when 621 Trevor Gibbons came to a stop in turn four, bringing out the caution flag. After the restart, Eisele shot into the lead, with Greenfield settling into second. 6 Matt Brown moved into third after the restart, while 318 Dave Richer took over fourth. Another caution and another restart had the same results with Eisele taking the high line around the track, retaining the lead. Matt Brown took advantage of a Greenfield misstep in lap eight. Brown moved into second, with Greenfield falling back to third. The lead Eisele had built up by lap eleven was erased after Remington Hamm spun out in turn four, eliciting a caution from the flag stand. Eisele, once again, was able to grab the lead on the restart, with Brown in second and Greenfield in third. At the checkered flag, it was 18 Gavin Eisele with the win, 6 Matt Brown grabbed second, 76G Skylar Greenfield finished third, 66w finished fourth, and 57H Remington Hamm finished fifth.

Racing resumes at Caprara’s Can-Am Speedway on June 17th. There will be no racing on June 24th due to graduation weekend.