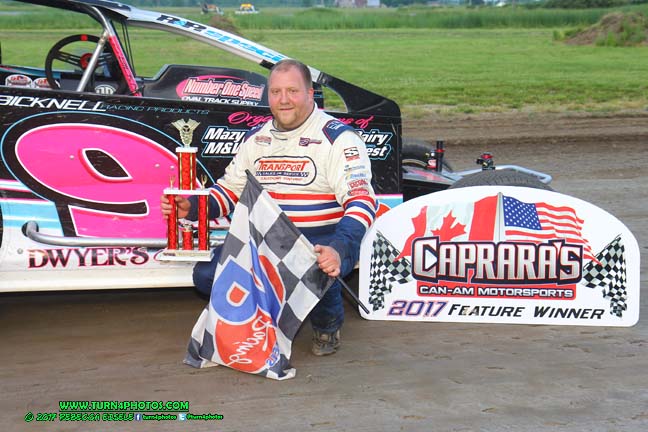 LAFARGEVILLE, NY – On a swelteringly hot night at Caprara’s Can-Am Speedway, in Lafargeville, NY, Billy Dunn wasn’t sweating the competition. He moved through the field quickly and captured yet another win in the 358 Modified class. In a caution-less feature, Dunn was averaging nearly a second faster than the rest of the field, finishing well ahead of a second place Ryan Arbuthnot.

Josh Reome put on a show in the Sportsman Modified feature, climbing up from seventh to take the lead with only a few laps remaining. Anthony Stockman grabbed the lead on a late caution restart, but lost out on the victory after Reome dove low in turn two on the final lap to recapture the lead and ride it all the way to victory lane. Stockman had run a brilliant race as well, having started in fifteenth position and finishing in a close second, on a crowded night of Sportsman Modified racing at Caprara’s Can-Am Speedway.

No racing at Caprara’s Can-Am Speedway next Saturday. Racing resumes at Can-Am on Wednesday June 28th.

NOVICE SPORTSMAN FEATURE: For the first feature of the evening, the Novice Sportsman Mods took to the track, with 15 Jamie Brown and 76G Skylar Greenfield started in the top two positions. Brown got the holeshot through turn one, retaining the lead, with Greenfield in second. 57H Remington Hamm wasted little time moving past Greenfield and then Brown for the lead. Brown wouldn’t go without a fight, however, as he squeezed Hamm up against the berm on the back straightaway through lap three, forcing Hamm to back off, leaving the lead for Brown. By lap six, Greenfield regained the second position from Hamm. 621 Trevor Gibbons spun out through turn four in lap eight, bringing out the race’s first caution. Gibbons was able to return to racing without any damage to the vehicle. On the restart, Greenfield took the high line around the track and grabbed away the lead from Brown. 6 Matt Brown was on the move, battling for third position with Hamm through out lap nine. 318 Dave Richer went over the berm of turns one and two, eliciting a caution in lap ten. He was able to rejoin racing without damage. Greenfield retained the lead on the restart, and led for two laps until the 318 of Richer got loose again, this time in turn four. Richer came to a stop against the wall, but was once again able to rejoin the race at the tail of the field. By lap twelve, 6 Matt Brown moved into second position just as another caution flag was unfurled at the flag stand. Greenfield had a good restart, retaining the lead, but 6 Matt Brown was hot on the heels of the 76G. At the checkered flag it was 76G Skylar Greenfield with the win, 6 Matt Brown in second, 15 Jamie Brown in third, 18 Gavin Eisele in fourth and 621 Trevor Gibbons in fifth.

PRO STREET STOCKS FEATURE: Under hazy skies, the Pro Street Stocks took to the half mile track, with 4 Mike Durham and 32 Ryan Shanahan starting in the top two positions. At the drop of the green flag, 3 Rick Dusckas dove low, going three wide with the leaders through turn one. Dusckas emerged from turn two as the leader, with 690 Sid Harmer Sr. following his lead through the field and capturing second place by lap two. 3k Shawn Kirby fought his way into third by lap three, after passing up Shanahan. By lap four, the field stretched out half way around the track, in single file. 1x Mike White moved into the top five after passing up Shanahan, and 14R Sid Harmer Jr. followed suit. 83D Dustin Bradley went over the berm of turn two in lap nine, bringing out the caution flag. All leads were reset, as a side-by-side restart ensued. On the restart Dusckas got loose and narrowly avoided disaster, getting sideways for a moment in front of the entire field. Dusckas was able to continue racing at the back of the field, going from first to last in a blink of the eyes. Dusckas’ vacancy left 3k Shawn Kirby and 690 Sid Harmer Sr. in the top two positions on the restart. In lap ten, Kirby squeezed 14R Sid Harmer Jr. up against the berm of the back straightaway. Harmer narrowly avoided a wreck, and surrendered the fight for the moment. One lap later, the roles were reversed, and the 14R machine did the squeezing, forcing Kirby off the back straightaway, and into a spin out. This elicited a caution and moved Kirby to the back of the field on the restart. By lap twelve, it was 690 Harmer Sr. and 14R Harmer Jr. in the top two positions, with 1x Mike White in third and 3 Rick Dusckas back in fourth position, steadily moving back through the field. 3k Shawn Kirby was busy getting back into contention as well, moving into fifth position by lap seventeen. With two laps remaining, 83D Bradley got loose again, triggering his third caution and an end to his night of racing. At the checkered flag, it was 690 Sid Harmer Sr. with the win, 14R Sid Harmer Jr. in second, 1x Mike White in third, 3 Rick Dusckas in fourth and 3k Shawn Kirby in fifth place.

358 MODIFIED FEATURE: As the big boys roared onto the track for the third feature of the night, it was 72 Scott Webb and 19 Luke Stewart in the top two positions. 51 Brady Gill and 57 Rylee Gill started in row two, in positions three and four. Points leader 9 Billy Dunn started in row four in eighth position. Webb retained the lead at the drop of the green, while 9 Dunn charged up to fifth immediately. By lap three Dunn moved into third, and a lap later owned second place. In lap five, Webb and Dunn traded paint and rubber in a battle for first, with Dunn squeezing through the low side and capturing the lead. Dunn distanced himself from the rest of the field by lap ten, with Webb in second, 19 Stewart in third, 57 Rylee Gill in fourth and 51 Brady Gill in fifth. By lap twelve 57 Gill moved into third position and R70 Ryan Arbuthnot captured fifth. Arbuthnot passed up Stewart in lap eighteen, taking over fourth position. In lap twenty-three, Arbuthnot passed up Rylee Gill for third, and captured second position one lap later. But nobody was catching 9 Billy Dunn, who finished a half-track ahead of the rest of the field. At the checkered flag it was 9 Billy Dunn with the victory, R70 Ryan Arbuthnot in second, 57 Rylee Gill in third, 10 Josh Vanbrocklin in fourth and 19 Luke Stewart in fifth.

SPORTSMAN MODIFIED FEATURE: Thirty-one cars entered the Sportsman feature, with 22 Josh Verne and 5 Amy Holland starting in the top two positions. M-1 Rick McCready and 26 Mike Mandigo followed in row two. 5 Holland captured the lead by the close of lap one. 91 Josh Reome moved up from a seventh place start to fourth by lap five. Holland was able to retain the lead through seven laps, but 22 Verne made a move in lap eight for the lead. It was short lived, as Holland recaptured the lead by turn four. Holland had her hands full with Verne attempting to pass low, and Josh Reome going high. Reome had the right idea, taking the lead going high by lap eleven. Meanwhile, 57 Anthony Stockman moved up from fourteenth to fourth, hot on the heels of Holland and Verne. By lap fourteen Stockman passed Verne and a lap later took second away from Holland. As Reome was forced to navigate through lapped traffic, Stockman closed the gap on the leader, coming within striking distance by lap eighteen. Reome’s tactic of taking the high-line around the track changed, as Stockman had a fast line running low, forcing Reome to slide down and block. The first caution of the feature came out in lap twenty-one. The single-file restart had 91 Reome in first, 57 Stockman in second, 21 Taylor Caprara in third, 22 Josh Verne in fourth, and 26 Mike Mandigo in fifth. On the restart 57 Stockman fired ahead into the lead, but Reome stayed right on Stockman’s bumper, looking for an opportunity to recapture the lead in the final laps. Reome dove low through turn two and snaked the lead from Stockman, and was able to hold on to the checkered. At the finish line, it was 91 Josh Reome with the victory, 57 Anthony Stockman in second, 21 Taylor Caprara in third, 26 Mike Mandigo in fourth and 22 Josh Verne in fifth.

THUNDERSTOCK FEATURE: The four-cylinder fury got off the line next, with 61 Jerry Rogers and 26M Phil Desormeau III starting in the top two positions. 94 O.J. White and 17B Mike Greenfield started in row two, in third and fourth positions, respectively. Desormeau moved into the lead by turn one, as 60 Justin Pope moved up from sixth position to third by lap two. A dangerous wreck occurred during lap two as 61 Rogers got sideways across the field, and took a hard, broadside impact from 5 Don Woodworth, rolling the number 61 car through turn one. It came to rest on its tires, facing the wrong direction. It was a heart-stopping wreck, but all drivers walked away from it sore, but relatively unscathed. On the restart, Desormeau regained the lead, and 60 Pope moved into second, leaving 94 White in third. By lap four, 50 Zach Stone was in third, leaving 94 White and 17B Mike Greenfield to battle for fourth behind him. 16 Matt Marcinko wanted in on the action, igniting a three-way battle for fourth. Greenfield and Marcinko got by White in lap seven, both catching up to 50 Stone by lap nine. It became a three-way battle for third by lap eleven, with Stone holding the advantage, followed by Greenfield and then Marcinko. By lap twelve, Marcinko was able to sneak by Greenfield and started putting more pressure on Stone for third position. Marcinko made his move on Stone in the final lap, grabbing third position. At the checkered flag, it was 26M Phil Desormeau III, 60 Justin Pope, 16 Matt Marcinko, 50 Zach Stone and 17B Mike Greenfield in the top five positions.