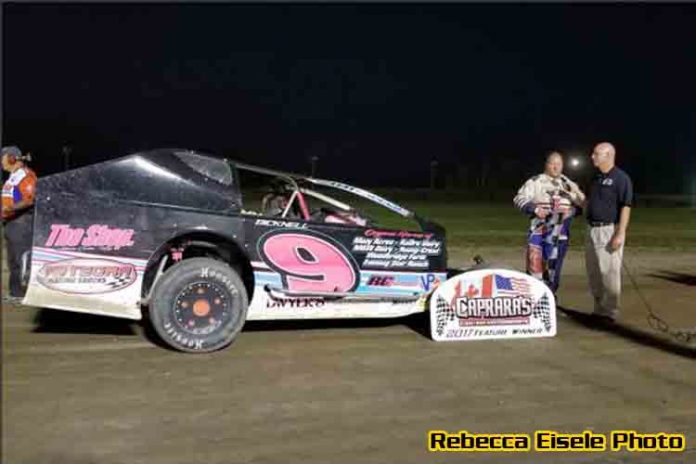 LARFARGEVILLE, NY – Billy Dunn picked his way through the field and was in the lead of the feature race for 358 Modifieds by lap six, after starting ninth. Dunn was never in jeopardy of losing the lead once gaining it, during a relatively caution-free race on the half-mile clay surface at Caprara’s Can-Am Motorsports Park.

“That one was really good,” Dunn said of the race, while standing in victory lane with track announcer, Jim Olin. “We got a jump on it early. We ran a little better than last week. The car was really good, and I’m looking forward to closing out the season over the next month.”

Taylor Caprara was able to take advantage of multiple cautions and restarts to take home his first victory on the season at Can-Am for the Sportsman Modified class, after climbing up from a fourteenth starting position.

Other winners on the night included Sid Harmer Jr. in the Pro Street Stocks, Jamie Brown in the Novice Sportsman and Phil Desormeau III in Thunderstocks.

Racing resumes at the Nasty Track of the North, Caprara’s Can-Am Motorsports Park, on August 5th.


Visit racecanam.com for more info or visit us on Facebook.

NOVICE SPORTSMAN: 15 Jamie Brown and 621 Trevor Gibbons started in the top two positions. Brown leaped to the lead immediately and owned the lead until 57H Remington Hamm spun him through turn one of lap two. Hamm was sent to the back of the field for contact. On the restart 76G Skylar Greenfield took over the lead, with 621 Gibbons in second. In lap three, it was Hamm’s turn to spin out, after 18 Gavin Eisele got together with him in turn four. On the next restart Gibbons took over the lead, with Greenfield in second. 57H Hamm was moving up through the pack, bumping and weaving through traffic. Hamm got as far up as third in lap four, before fading back to fifth a lap later. 15 Jamie Brown, meanwhile, was moving up again, taking the lead back from Gibbons by lap five. 18 Gavin Eisele moved up to second position two laps later, with a quarter of a track in front of him to catch the leader. With two laps remaining, the top three cars were stretched around half the track, with 15 Jamie Brown in the lead, 18 Gavin Eisele in second and 621 Trevor Gibbons in third. And that’s how it would remain at the checkered flag: 15 Brown, 18 Eisele and 621 Gibbons in the top three positions.

PRO STREET STOCKS: The top two starters for the feature were 32 Ryan Shanahan and 3k Shawn Kirby. In row two, it was 4 Mike Durham and 83D Dustin Bradley started in row two, positions three and four. As the green flag unfurled, it was three wide racing in a battle for third position behind the leaders. When it all shook out, Kirby had the lead, with Bradley in second, but a caution came out over lap two when 62 Johnathan Murphy and 55 Kenny Clark got together in turn three, spinning both cars around. On the restart, Kirby jumped out to the lead, once again, with Bradley close behind in second. 14R Sid Harmer Jr. was nipping at the heels of the leaders through lap two, while the rest of the field was jostling for position, going three wide several times. By lap five, Harmer Jr. passed Bradley for second and set his sites on Kirby and the lead. In lap nine, 7x Justin White went up over the berm of turn one, bringing out the caution and setting the stage for a restart with Sid Harmer Jr. and Shawn Kirby side-by-side. On the restart, Kirby claimed the lead, while 3 Rick Dusckas leap-frogged from back in the field to grab second position for a moment. But he faded back to fifth by the time another caution came out when 690 Sid Harmer Sr. spun a complete 360 degrees on the back straightaway. Harmer Sr. was able to rescue the car from disaster and continue the race at the tail of the field. On a single file restart, Kirby retained the lead, with Sid Harmer Jr. in second. Dusckas moved up to fourth, battling Bradley for third. By lap eleven, Harmer Jr. moved past Kirby for the lead. Another caution gave Kirby an opportunity to take the lead, but Harmer Jr. fended off the assault and retained the lead, while Kirby ran second and Dusckas settled into third. At the checkered flag, it was 14R Sid Harmer Jr. with the win, 3k Shawn Kirby in second, 3 Rick Dusckas in third, 4 Mike Durham in fourth and 18 Remington Marquette came in fifth.

“Kirby was pretty fast, and we did rub a little there,” Harmer Jr. said from victory lane. “But that’s racing. It was good running side by side there for a bit.”

SPORTSMAN MODIFIED: Starting in the top two positions it was 29J Joel Hall and 2 Chris Thurston, with 71 Delbert Legrow and 45R Preston Forbes starting in row two. At the drop of the green, Thurston shot into the lead, with Legrow settling into second. 91 Josh Reome came to a stop off the berm of the back straightaway, triggering a caution. On the restart it was Legrow who got the jump for the lead, with Thurston battling mightily for the position. 15 Greg Henry, 38 Zach Sabotka 7s Shaun Shaw, 1 Jack Meeks and 71X Tim Falter got caught up in the back straightaway, resulting in Sabotka having a front wheel torn off the vehicle and the other cars every which way but straight on the track. Meeks left on the hook to the pits, as did Shaw and Sabotka. Fortunately all drivers were uninjured. On the restart, Thurston drove to the lead, with Legrow retaking the lead by the close of lap two. 621 Brian Hudson cuddled up to the leaders in third, but in an attempt to move past the leaders in turn four, he got caught up in the wet edge of the track, spinning out. This sent Hudson to the back of the field. After two laps and two cautions, racing resumed, with Legrow in the lead and Thurston in second. 21 Taylor Caprara was on the move, claiming fifth position by the close of lap four, chasing 45R Preston Forbes and 25 George Sanford in the third and fourth positions. Forbes took contact in the left rear, leaving it damaged and sending him to the infield in front of the grandstands. The 45R had to leave on the hook, racing over for the night. On the restart, Legrow and Thurston still were battling for the lead, with Thurston thrusting ahead. 21 Taylor Caprara moved up into second by lap eight, and challenged for the lead a lap later. Caprara tried the low line, but Thurston was finding the high line faster, and was able to fend off each of the attacks by Carpara. Another caution came out in lap eleven, putting Caprara up on Thurston’s door for the restart. Caprara got the advantage at the drop of the green and took over sole possession of the lead by the close of lap twelve. 415 Andrew Wren had quietly moved up through the pack and into third position by lap thirteen. In lap thirteen 66W Derek Webb got into the back of 26 Mike Mandigo, spinning him out off the back berm of the track. Webb was sent to the tail for the contact. The single file restart had Caprara in the lead, with Thurston in second and Wren in third. Wren took over second by the close of lap fourteen, but gave it back to Thurston by lap seventeen. Meanwhile, 1 Jack Meeks was moving up through the pack, able to stay on the lead lap after the extended caution that saw him go to the pits. By lap nineteen, Meeks was into fourth, passing up 71 Legrow. Caprara’s extensive lead over the rest of the field was destroyed when a caution came out in lap twenty-one. Moments after the green flag waved once again, Caprara was out ahead of the field, distancing himself from the 415 and 2 in second and third place. At the checkered flag, it was Taylor Caprara with the victory. 415 Andrew Wren finished second, 2 Chris Thurston was in third, 1 Jack Meeks finished fourth and 71 Delbert Legrow finished fifth.

It was Caprara’s first trip to victory lane on the season, and a hard fought victory, after starting fourteenth position on the night.

358 MODIFIED: 24 Brandon Sweet and 39 Tyler Bartlett led the field onto the track for the feature, in starting positions one and two. In row two 51 Brady Gill and 19 Luke Stewart filled positions three and four. Sweet owned the lead out of turns one and two, with Bartlett settling into second. 9 Billy Dunn moved through the field to third position by lap two. Dunn took over second position by lap three, moving in on the leader, Sweet. 28 Tyler Meeks was also hard-charging, moving up to third position by lap six. Dunn overtook Sweet for the lead in that same lap, and shot out ahead of the field by multiple car-lengths by the close of lap nine. R70 Ryan Arbuthnot was steadily moving through the field by lap thirteen, climbing past 39 Tyler Bartlett for fourth position. At the half-way point, it was 9 Billy Dunn in the lead, 24 Brandon Sweet in second, 28 Tyler Meeks in third, R70 Ryan Arbuthnot in fourth and 39 Tyler Bartlett in fifth. The race continued under green for the remaining laps, the top contenders stretching out around the entire track, with Dunn and Sweet navigating through lapped traffic before finding the checkered flag. In the end, Dunn wrapped up yet another victory at Can-Am, wit 24 Brandon Sweet in second, 28 Tyler Meeks in third, R70 Ryan Arbuthnot in fourth and 57 Rylee Gill moving up to snag fifth position.

THUNDERSTOCKS: The four cylinders hit the track next with 32 Chuck Monica and 17B Mike Greenfield started in the top two positions. Monica ran with the lead through lap one, but 26M Phil Desormeau III moved up through the field to challenge Monica from second position. After a lap two caution, the restart saw 26M Desormeau take over the lead. 42 Lyle Robinson moved through the field to take over third position, following a lap five caution. Justin Pope in the number 60, was moving back up from the rear of the field when he found himself facing backwards against the turn three wall just a few laps later. Pope was a little shaken up, but was able to walk away from the wreck. At the finish line, it was 26M Phil Desormeau III with the win, 32 Chuck Monica was second with 42 Lyle Robinson coming in third.