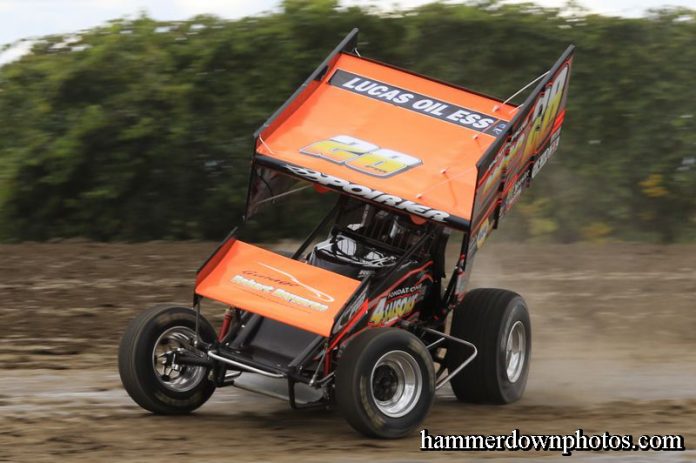 LaFARGEVILLE, NY – For the sixth time in his career Steve Poirier found himself in victory lane at Caprara’s Can-Am Motorsports. The seven-time champion made a late race rally to go from third to first for this fourth feature win of the season with the Lucas Oil Empire Super Sprints.

Poirier picked up $2,025 for his win in the NAPA Auto Parts U.S. Tour/SUNY Canton Series event.
Poirier started the feature from the sixth position making moves early to find himself third before five laps were complete. From there he settled in battling with Jeff Cook for second. He was never able to clear him until the final few laps. Poirier elected to step out of line and take a chance on the outside. That chance paid off as he ended up scoring his 65th career series win.

“The last seven or eight races we’ve been good,” cited Poirier. “Our program came back. We tried some things earlier in the season that didn’t work. We needed to improve because everyone is working hard to battle with us. We had to go back to our old stuff which still works really good. I’m happy here. It’s strange, sometimes we are really good at Can-Am or sometimes we struggle bad. Tonight was a night we were good.”

Matt Tanner and Cook made up the front row for the start of the A-Main. Cook beat Tanner to one to take the lead before Tanner utilized the high lane around the top of turns three and four to go to the front. They remained the top two in the running order with Poirier in tow in third.


Tanner caught the first bits of traffic with seven laps on the scoreboard. He made a couple quick moves to keep Cook behind him. Cook was relentless in his pressure of Tanner to the point where he was able to pull up next to him on the 11th lap. He nearly got the lead but Tanner rallied to stay in front.

As a result of the move by Cook, Tanner changed his lane drastically on the speedway moving down to the bottom of the track with Cook following. At halfway Tanner was gaining on very thick traffic.
Tanner refused to move off the bottom believing that was the quickest lane on the speedway. Cook stayed in line while Poirier closed up on both of them as they navigated traffic. The pair got lined up nose to tail with Tanner strong on the bottom.

Five laps remained when Poirier made his move. Cook was boxed in on the bottom through turns three and four. Poirier jumped out of line and ran the high-side to take second as they raced back to the start-finish line. Tanner was in a similar situation in turns one and two. Poirier again went to the top to take the lead as they exited the second corner to lead lap 21.

“I thought I was going to be third,” commented Poirier. “Then I saw those lapped cars. So I thought maybe I could try the outside. I was stuck in third so I’ll try it. They were so jammed and I have just enough bite on the outside. I was happy that I made it through that.”

Poirier drove away over the final four laps to end up the winner. Tanner’s night ended with a second place finish. A tough outcome after leading most of the race. The Stephentown, N.Y., pilot felt like the bottom was where he had to be.

“I knew I had to get to the bottom when Jeff (Cook) showed me the nose there,” stated Tanner. “There were a couple of lapped cars that weren’t giving us any room. I was playing it out in my head whether I should try the outside and take a chance that nobody fills the bottom or just hang out where I was. I decided to stay on the bottom. Steve (Poirier) was sitting back in third and he could see where everybody was where I was looking at lapped cars. I didn’t know where second and third were. He had a little bit of an advantage and it worked out for him tonight.”

Cook, the local favorite from Antwerp, N.Y., was happy to finish on the podium in front of the home town fans. He got the loudest cheers as he parked his No. 10 on the frontstretch after the main-event.

“It’s been long time since I got to come down front here,” said Cook. “All the pressures of being at home and 27 people want to work on your car. Usually I can’t think straight. Tonight we got through that and finished in the top three. It’s a good thing.”

Paul Kinney finished the night in the fourth spot while Chad Miller had his best run of the season to finish fifth. The entire night from hot laps to A-Main checkers went without a caution flag.