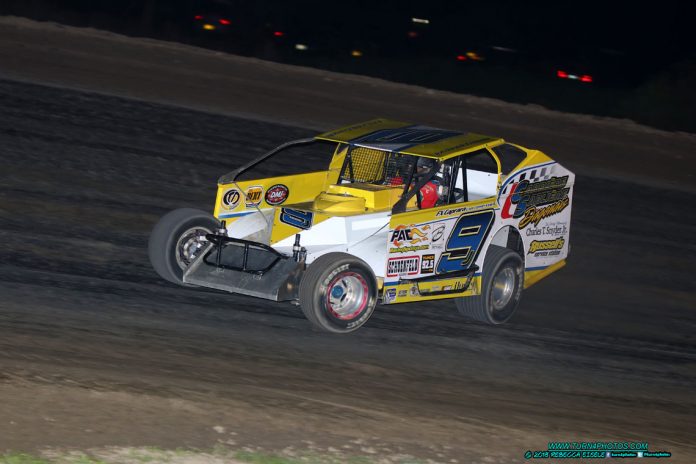 LAFARGEVILLE, NY – Race fans were treated to some exciting racing this past Friday night at Can-Am, on Superior Plus Energy, Gillie’s NAPA Auto Parts-CITCO Lubricants night.

Jordan McCreadie and Tyler Meeks took advantage of their heat wins to grab the front row of the 25 lap Whitesboro Plow Shop-DIRTcar 358 Modified feature.  McCreadie wasted no time opening up a comfortable lead over Meeks and Danny O’Brien.  Billy Dunn was the car on the move as he worked his way up to the second spot by mid race but McCreadie maintained some distance over Dunn and the rest of the field.  Minor cautions slowed the event but McCreadie would prevail for his first win of 2018 over Dunn and O’Brien.

Another strong field of FX Caprara Honda-DIRTcar Sportsman took the green for their 20 lap event.  Jackson Gill and Jordan Kelly brought the 30 car pack to the green and Kelly shot to the front early.  Kelly was in command when a multi-car wreck on the front straightway brought out the red flag.  As many as 10 cars were involved with the cars of Greg Henry and Trevor Gibbons ending up upside down.  All drivers were okay but many of the cars suffered major damage.  Kelly regained the top spot on the restart but it was Jack Meeks on the move as he grabbed the lead away on lap 15.  Meeks went on for the win over Kelly and David Rogers.

The Gillie’s NAPA Auto Parts-CITCO Lubricants RUSH Crate Late Models made their first of visits this past Friday night.  Former Can-Am Speedway track champion Charlie Sandercock and Kyle Sopaz lead the field to green and Sandercock completely dominated the event lapping up to the fifth place car.  Chris Fleming was able to work his way up to the second spot at the checkers and another former Can-Am regular Dale Caswell came across third.

The always exciting FABCO-Pro Street Stocks were up next with heat winners Burton Ward and defending champion Shawn Kirby on the front row.  Kirby was the early leader over Ryan Shanahan and Ward but it was Sid Harmer Jr. that was making his way forward and was ready to battle for the lead.  Kirby and Harmer would exchange the top spot over the final ten laps but Harmer proved a little stronger on this night and picked up the win over Kirby and Steven Gilmore.  Mike Greenfield grabbed the early lead in the TLC Real Estate/Agent Marsha Gibbons Thunder Stock feature.


Again this week the Thunder Stock competitors put on a good show with Greenfield holding the lead until lap nine when Joe Orvis took over the top spot.  Orvis would go on for the win over Greenfield and JR Durham.

The final feature of the night was the Rookie Sportsman.  A small field of only four rookies signed in.  Tyler Murray picked up the win over Dustin Hutton and Kevin Warren.

Next week will be Jiffy Dumpster night at Can-Am for our Memorial Appreciation event.  Can-Am will honor those drivers that competed at Can-Am over the years that have passed away, in a special celebration.  It will also be the first Enduro of 2018 at the speedway.

RESULTS FOR MAY 18TH