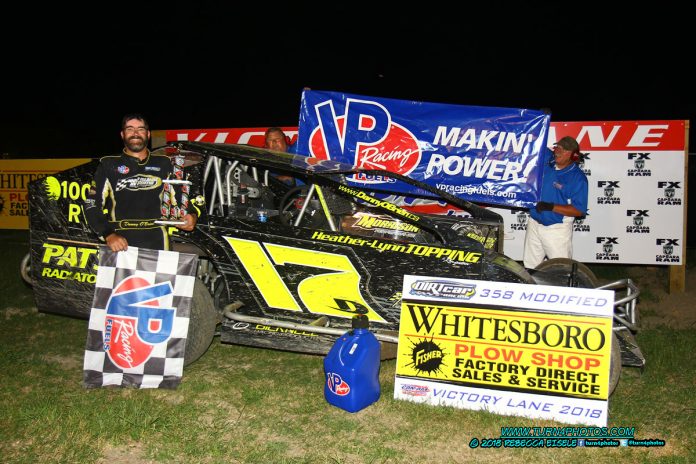 LAFARGVILLE, NY – For the second consecutive week, Danny O’Brien captured the 25-lap DIRTcar 358-Modified feature at the Can-Am Speedway.  The Kingston, Ont., driver was a rocket on his way to the front of the field for his second win at the ‘Nasty Track of the North.’

Luke Stewart jumped to the lead at the start of the feature.  He was able to maintain the number one position with Scott Webb in pursuit while O’Brien worked forward from his 10th starting spot.

Just before halfway, on lap 12, Webb got a good run off the second turn staying with Stewart down the backstretch.  He was able to dive low on Stewart in turns three and four to secure the race lead.

Three laps later O’Brien used a similar move to go by Stewart for second with focus now turning to Webb.  Before another lap could be scored Rylee Gill spun in the fourth turn to bring out the only caution of the event.

O’Brien got the jump on the restart driving by Webb while bringing ninth starting Billy Dunn with him.  Dunn went to the outside of O’Brien in turns three and four looking for the lead to no avail.

O’Brien led the final nine circuits for his second win of the season at Can-Am.  Dunny finished in second with Webb in third.  Ryan Arbuthnot finished fourth with Jordan McCreadie completing top five.

The FX Caprara Honda-DIRTcar Sportman saw 26 cars coming for the green, lead by Skylar Greenfield and Eric Nier. Nier grabbed the lead into turn one but Greenfield wasn’t about to let him get away.

The two were having their best races of the season showing the way, while a number of cars were making their way through the tough field. Dalton Rombough was also having a great run and took over the lead from Nier on lap 8.

Rombough’s lead was brief as point leader Dave Rogers had worked traffic cleanly and took over the top spot on lap 13. Rogers would go on for his first win of the season, Rombough had his best ever finish at Can-Am coming across second, followed by Anthony Stockman, Jackson Gill and Jessica Power.

The FABCO-Pro Street Stocks were up next for their 20 lap feature. Remington Marquette and Ryan Shanahan brought the group to green and Shanahan wasted no time grabbing the lead and trying to run away.

Opening night winner Mike White was on the move though and chased Shanahan until lap 10 when he found a way around. Shanahan wasn’t done though and was having a great run until the two leaders made contact with White going around. Shanahan was penalized for the contact, so on the restart it was defending champion Shawn Kirby inheriting the lead over two time winner in 2018, Sid Harmer Jr.

The two would again this week go at it for the checkered flag and this week it would be Kirby grapping the win over Harmer. Sid Harmer Sr., Steven Gilmore and White would complete the top 5.

The Thunder Stocks continue to put on one of the best shows of the night and this weeks TLC Real Estate/Agent Marsha Gibbons 12 lap affair was lead down by Francis White and Zach Stone, but it was Mike Greenfield leading lap one.

Greenfield, who has been strong all season lead until lap 4 when Phil Desormeau III took the number one spot away. Point leader Joe Orvis was on the move and again this week the fight for the top was a good one as the leaders went side by side for the win.

With the white flag waving, Orvis found what he needed to move around Desormeau for the win. Desormeau was right there in second, followed by Stone, Josh Verne and White.

Kevin Warren and Dustin Hutton had the front row for the Rookie Sportsman. Warren jumped out the lead and never looked back, picking up his first ever feature win in the caution free event. Hutton was right there in second followed by Johnathan Murphy.

Next Friday night will be the first of two Border Battle Series races at Can-Am. This is a quick 4 race series between Can-Am and the Brockville Ontario Speedway to determine which countries drivers come out on top, as the fight for a point fund sponsored by the 1000 Islands RV Centre.

It will be Security Supply night at the speedway and all five weekly classes will be in competition, with the DIRTcar 358 Modifieds going extra laps for $2000 to win. So far the Canadians have picked up 3 of the 4 features in 2018 at Can-Am, with Jordan McCreadie being the only American to find victory lane.

Keep up on what’s happening at Can-Am by following us on Facebook at Can-Am Speedway or on our website at www.raccecanam.com