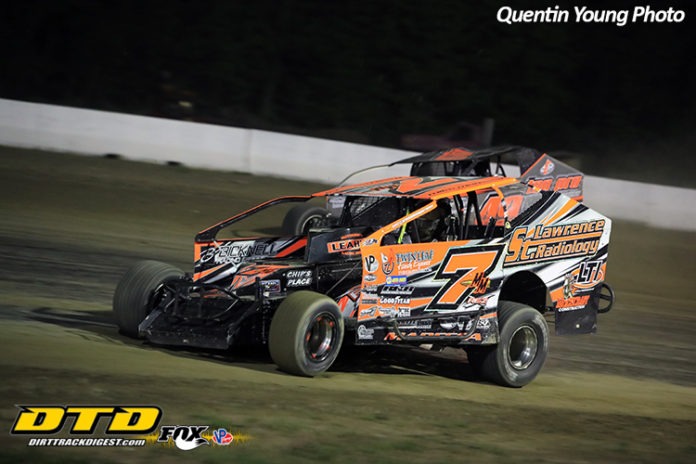 LAFARGEVILLE, NY – Michael Maresca found the right line at the right time in the DIRTcar 358-Modified season opener at the Can-Am Speedway.  Maresca used a late race pass to get by Billy Dunn for his first win of 2020.

Henry led Dunn and Jordan McCreadie in the opening stint of the 35-lap main, setting the pace through early cautions and restarts.

Dunn used a lap six restart to take the lead away, with Henry then falling wayside to McCreadie and Tim Sears Jr. on a lap ten restart. Once in second, McCreadie kept Dunn honest up front, with Sears under heavy fire from Mike Maresca.

After a rough first third of the race, the field settled in and filed out. Through halfway, it was still Dunn over McCreadie and Sears, but thick traffic was ready for the leaders on the shortened Can-Am layout.

McCreadie latched on to the rear bumper of Dunn through traffic, but a lap 21 yellow erased the traffic for the front pack. On the restart, Sears went to second and nearly to the lead, but a yellow one lap later canceled his momentum.

Sears had a restart to forget. After almost driving to the lead, Sears quickly found himself behind Maresca, Willix, and battling with Tim Fuller for fourth.

“I was taking my time early, then had a restart go my way and went from there,” Maresca said. “I had one restart up top when I got by a lot of cars, but the bottom had a lot of traction.”

Sears ultimately held off Fuller and regained third over Willix, but was a ways behind Dunn and Maresca. With ten to go, Maresca was hounding Dunn for the win.

The reconfigured Can-Am Speedway left drivers with some different options on-track. While most opted for the bottom of turn four, some entered turn three low and some swung a wide arc resembling an asphalt track.

Dunn opted for the latter, running close to the top on the entry of three and diamonding, while Maresca hugged the tires. With five to go, this discrepancy in lane choice gave Maresca his shot, diving low entering turn three and taking the preferred lane in turn four away from Dunn.

On lap 30, Maresca was scored as the leader.

“It definitely slickened up a bit with a lot of cars here tonight, but overall it was a really good race,” cited Maresca. “Billy had a wider line entering three and I was able to dive under him and get by.”

Dunn wasn’t going down easy, blasting the top and hanging even with Maresca for a lap and a half. Ultimately, Maresca prevailed, clearing Dunn with three laps left and leaving Dunn to fight off a charging Sears.

With a lap and a half left, Sears stole second, but was too far behind Maresca to mount a last lap charge.

As the checkered waived, it Maresca scoring the New York 358-Modified opener over Sears Jr., Dunn, Willix, and Fuller.