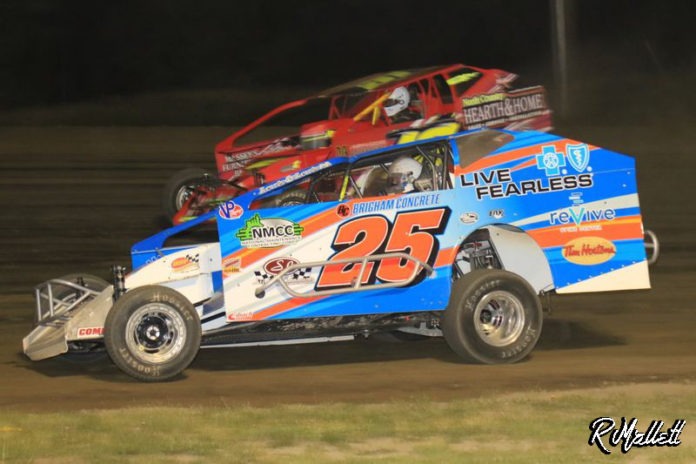 LAFARGEVILLE, NY – Erick Rudolph led wire-to-wire in the 358-Modified event at Can-Am Speedway, scoring the victory in the Pabst Shootout.

Rudolph led the way at the start of the 30-lap main, with Tyler Meeks and Lance Willix filing into second and third. After a short battle, Willix snagged second on lap five, but Rudolph was already gone. Meeks then fell off the back bumper of Willix, with the battle for third amongst a host of drivers heating up by lap ten.

A lap 11 yellow nixed Rudolph’s lead, but a bad restart by Willix allowed Rudolph to skate away. Willix dropped to fourth, as Modified novice Jack Gill and Tim Fuller got by. As quick as Willix gave up the spots, he regained them, back to second before halfway. By halfway, Rudolph’s gap was back to two seconds.

As the lap counter ticked away, Rudolph picked off lapped car after lapped car. Willix came under fire from a high-flying Fuller once again, but while that pair battled for second, Rudolph motored away. When the checkered flag fell after 30 laps, it was Rudolph grabbing the Pabst Shootout win over Fuller, Willix, Tim Sears Jr., and Billy Dunn.

“I knew we had a good car as soon as we came out for practice,” Rudolph said. “We kept up with adjustments through the night, and while it’s always fun to start like, you never know if someone else is coming. You feel a bit more comfortable when your car is that good, this one is a few years old but has always been very good and really maneuverable.”

The redraw was kind to Rudolph, but not Fuller. The Watertown, NY veteran who has won everything possible in the area came from twelfth on the grid to finish second.

“This is my third runner-up in a row at this event in the three years since it’s return,” Fuller said. “I joked to Charlie Rudolph just now that he needs to head back to his tracks so we can win some, but we just weren’t good enough to stick with him. I may have used my car up some, I was running a 5/8ths mile track way up top there.”

Fuller seemed content with his second-place effort, but Willix not so much with finish third.

“Lapped cars cost me second on that one,” stated Willix. “I guess I won’t be so friendly with them next time. I pretty much stayed glued to the bottom for that one where Fuller was up top, but I’ll take it running behind these two as they’re two of the best.”