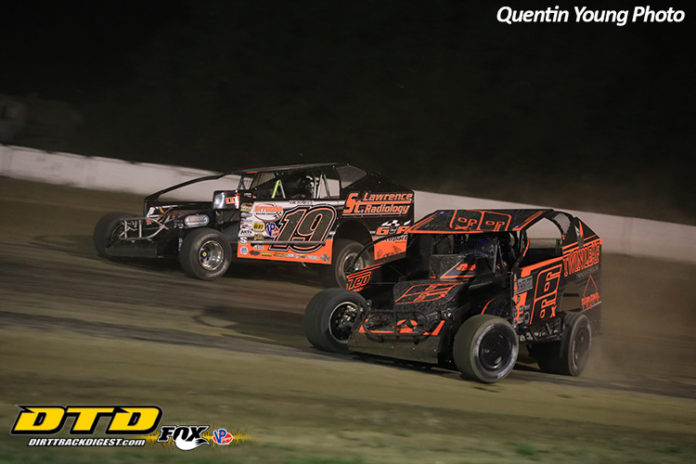 LAFARGEVILLE, NY – Tim Fuller was all smiles in victory lane on Friday night at the Can-Am Speedway after picking up his second win of the season at the Lafargeville oval.

Preston Forbes held the early race lead in the 25 lap main event, but Tim Fuller was a man on a mission in the early going. Coming from his 10th starting position he found himself on the outside of a lap 1 restart and made his way to the fourth position by the time they clicked off the 2nd lap.

From there Fuller pressed forward, moving by Bob Henry Jr. for 2nd on the third circuit, and passed Preston Forbes as they clicked off lap 6 however a yellow slowed the racing action.

On the ensuing restart there was contact between the 21H of Bob Henry Jr and the 60 of Jackson Gill as they got hooked together in turn 1 and ended up off the speedway and in the grass in turn 1.

When action restarted it was Fuller who jumped out to the lead again, but Carey Terrance was putting on a show behind them, working the outside lane. By lap 9, the Terrance 66 machine had made his way to the fourth position, just behind Jordan McCreadie and Preston Forbes.


A spin in turn four caused another yellow, and on the restart McCreadie made a move on Forbes for the 2nd position, but was unable to secure the spot. From there, it was a torrid battle between Jordan McCreadie, Carey Terrance and Michael Maresca as they battled for third, fourth and fifth.

Unfortunately the yellow flag would fall again on lap 17 for a slowing Lance Willix machine on the frontstretch.

On the restart, Michael Maresca was able to complete a slide job on Carey Terrance in turns 1 and 2 to secure the third position.

The races final yellow flag would fall on lap 18 for a slow car in turn four. On the restart it was all Tim Fuller as he powered away, but the race was for 2nd as Michael Maresca was throwing everything he had at the 28 of Jordan McCreadie. As things settled out, McCreadie was able to hold onto the 2nd position over Maresca.

In the end, it was Tim Fuller who powered his way to his 2nd win of the season, followed by Jordan McCreadie, Michael Maresca, Carey Terrance and Billy Dunn.

In victory lane, Tim Fuller spoke about his ability to make the top of the race track work so well tonight. “The thing is I have a w16 and they don’t put out the most horsepower, but they’re a very driveable motor. I know I’m in the field with a lot of cars that have some good horsepower, so I just try to keep it wound up up there.”

In speaking about all of the restarts in the main event, Fuller mentioned he was concerned about fuel. “I got with fuel. I didn’t prepare for a 50 lapper so I started taking the short way around the track. It reminded me of Syracuse when I was trying to save fuel and go the shortest way around the track under the cautions but sometimes you have those nights, it is what it is.”