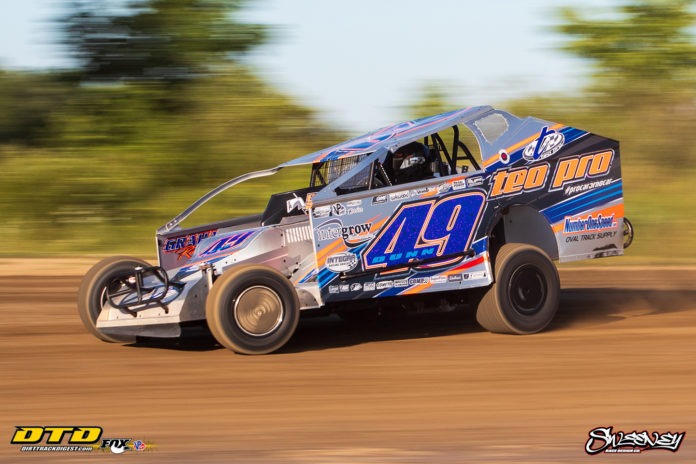 LAFARGEVILLE, NY – Billy Dunn is a constant threat to win at Can-Am Speedway whenever he unloads, but prior to this weekend, he hasn’t had everything fall his way in order to grab a win. That changed Friday night, as Dunn picked up his first win of the season at Can-Am in dominating fashion, coming from tenth to win by nearly half a lap in the 25-lap Modified event.

Bobby Henry led Nick Webb through the opening circuits of the 358-Modified feature, with Dunn making big progress in the early stages. Dunn got by seven cars in the first three laps to place himself in third, on the tailgate of Webb and ready to challenge for second. Dunn took a swing with five laps in, but a yellow waived and canceled the pass.

Following another quick caution, Dunn went to work on the top two. Webb fell victim to Dunn on lap six, then Dunn charged around Henry to lead lap seven. Once in clean air, Dunn hit the afterburners on his #49 Teo Pro Car and set sail.

Modified sophomore Garrett Rushlow must have been paying attention to Dunn’s lanes and moves, following through for second by halfway. The battle for the runner up spot was hot, with Jack Meeks, Tim Sears Jr., and Mike Maresca joining Rushlow, Webb, and Henry in the fight. The best car in this pack was Sears, picking his way to third by lap 17, then analyzing Rushlow for a way by.

Out front, Dunn was gone. With five laps to go, Dunn’s lead was approaching half a track. While most fought for the bottom in turns three and four, Dunn was sailing around the far outside and picking off lapped cars at will. When the checkered waived after 25 quick laps at Can-Am, it was Dunn scoring his first of the year in dominating fashion. Sears snuck by Rushlow for second near the finish, with Rushlow, Lance Willix, and Meeks completing the top five.

“It’s been hard to get stuff to go our way here,” Dunn said. “Every time they do go our way, our car has fallen off. My crew has put in a ton of work on this thing and it showed tonight where everything went our direction. It’s been a short summer and I wish we would’ve got here to victory lane sooner, but I’m glad we had the showing we did tonight.”