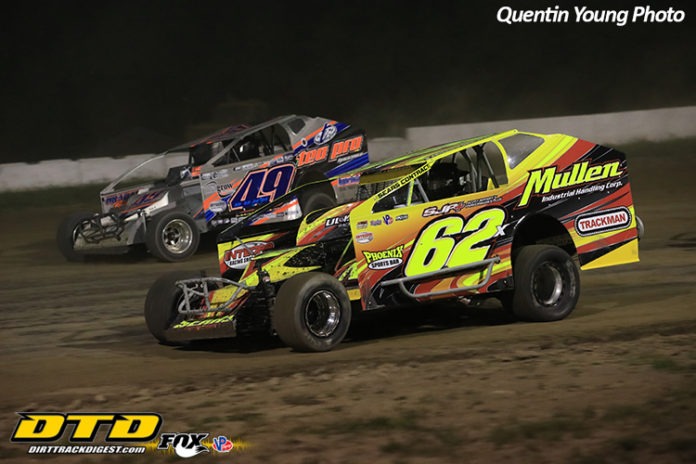 LAFARGEVILLE, NY – The second half of the 25-lap Small Block Modified feature at Can-Am Speedway was highlighted by a see-saw battle between Tim Sears Jr. and Billy Dunn. After inheriting the lead with ten laps left, Sears held off all advances by Dunn to score his first Modified win at the track.

Bobby Henry spent the early stages of the main event in the lead, controlling a number of early restarts. These early restarts allowed Mike Maresca to make serious headway, charging from 17th to the top spot in under seven laps. Maresca has been on a hot streak at Can-Am, and the rapid charge to the front spelled disaster for everyone else.

Following Maresca, Sears and Dunn were gaining ground, reaching second and third by halfway. Both Sears and Dunn had good speed, but Maresca was ahead by over 2.5 seconds and no plans on slowing down. However, plans abruptly changed, as a sparking Maresca machine came to a stop on lap 15.

With Maresca taking a trip to the pits, Sears and Dunn were set to square off in the final ten laps. Sears went low and Dunn went high, with Dunn poking a nose out front on multiple occasions. However, Sears was fast in turns three and four, retaking the lead every time Dunn grabbed it off of turn two.

With two laps left, a lapped car in Sears’ lane forced him off the bottom for a set of corners, but Dunn was unable to capitalize. With the checkered waiving, it was Sears narrowly scoring the hard-fought win over Dunn in a battle that lasted the second half of the 25-lap feature. Invader Larry Wight came home a solid third from deep in the field, with Jordan McCreadie and Tyler Meeks rounding out the top five.

“This is really cool to get one this season, especially not being sure how much we would run with everything going on,” Sears said. “It’s cool, it’s been a while since I’ve won here, it’s been since my Sportsman days. It was slick out there tonight, and running the bottom I just had to keep the car under me, the tires under me because I knew Dunn was right there.”