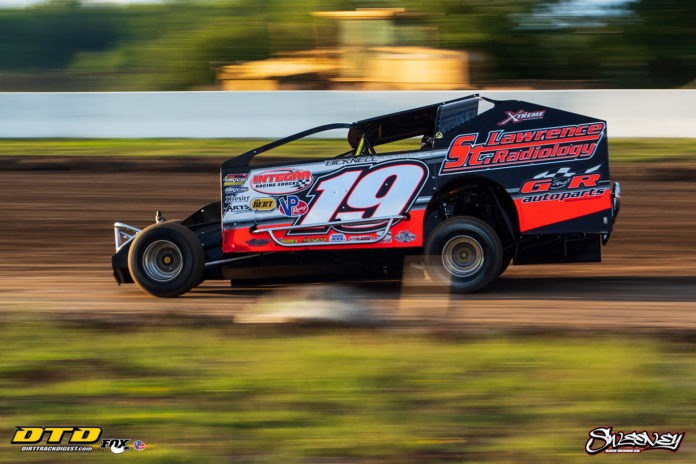 Tim Fuller tamed a large field of 358-Modifieds and a lightning-quick Can-Am Speedway en route to his third win of the year at the track. Heavy afternoon rain produced a very contrasting surface to usual at Can-Am, with Fuller mastering the change during the 25-lap feature.

Bobby Henry led the way early over Dan Beachard and Jackson Gill, setting the pace through a pair of early restarts. Using a lap three restart, Fuller launched from fourth to second, momentarily taking the lead from Henry, but the lead pass negated by a caution. Following the lap five restart, the lead was Fuller’s to keep.

Jordan McCreadie was another driver using the restarts to his advantage, working by Henry and Gill to grab second. Gill disposed of Henry near halfway, then feeling pressure from fifteenth starter Mike Maresca. A lap 12 yellow regrouped the field, but Fuller was not sticking around on the restart, motoring away from McCreadie.

With every lap, Fuller’s lead over McCreadie grew, and McCreadie’s advantage over Maresca and Gill grew as well. When the checkered waived, it was Fuller scoring the 358-Modified victory over McCreadie, Maresca, Gill, and Henry.


“The up front starting spot sure helped,” Fuller said after starting sixth. “We had a couple bad weeks capped off with a wreck last week, and the track was just so fast tonight. There was a lot of carnage early in that one, just every little mistake is amplified when the track is that quick. We got a good amount of rain, but Tyler Bartlett and the track did a good job of getting us a surface we can race on, it was smooth and good, just very quick.”