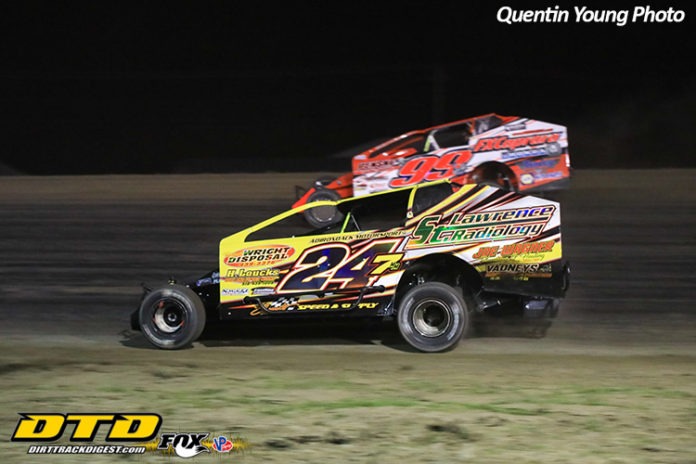 LAFARGEVILLE, NY – After grabbing the lead early, Larry Wight walked away from Mike Maresca during the second half of the 358-Modified feature at Can-Am Speedway, taking his first win of the season at the track in the points-season finale.

Devin Willis spent the opening stages of the 25-lap feature in the lead, with Luke Fuller close behind. Early chargers were headlined by tenth and twelfth starters Wight and Maresca, with Wight sliding by Fuller for second on lap five. A lap later, Wight went to the bottom and drove past Willis for the lead.

Maresca wasn’t far behind, getting by Fuller just prior to a lap nine yellow. Following the restart, Maresca went on attack mode, diving low while Wight went high and nearly taking the lead. Following a short side-by-side battle, Wight secured the top spot once more by halfway, while Billy Dunn worked into third.

As laps clicked off, Maresca started to lose touch of Wight, while facing increasing pressure from Dunn. Wight’s lead stopped growing and started fluctuating with the introduction of lapped traffic in the final handful of laps, but Maresca was ultimately too far back to challenge in the late stages. At the finish, it was Wight scoring his first Can-Am win of the season, while Maresca claimed second and the track championship. Dunn finished third, with Tim Sears Jr. and Tyler Meeks completing the top five.

“We had a real good car tonight, and Tyler Bartlett did a real nice job with this track,” Wight said. “It’s a little different after the reconfiguration, but still races a lot like old Can-Am. They were able to work out that hole in turn three, get it slick and super smooth, and it was real fun to race tonight.”