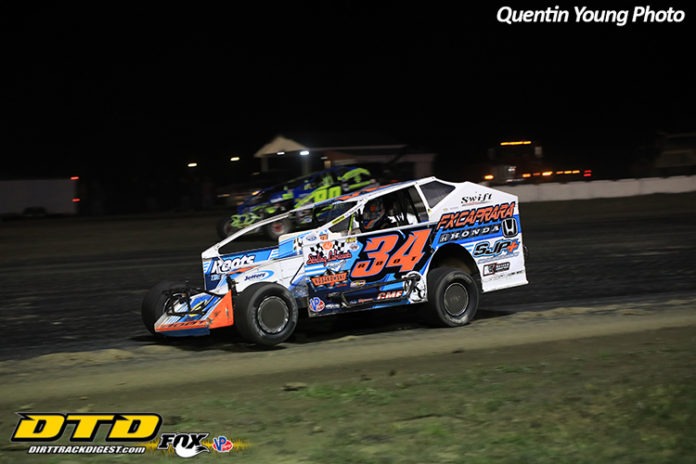 LAFARGEVILLE, NY – Kevin Root returned to victory lane at “The Nasty Track of the North” Friday night by winning the Racing Electronics DIRTcar Sportsman event as part of DIRTcar Racing’s OktoberFAST at the Can-Am Speedway.

Root and Kyle Inman would share the front row of the 30-lap event with Root taking the lead. Root would extend his lead after a lap three restart and would never look back. Matt Janczuk was looking for another win during OktoberFAST. Janczuk would race in the top three all race long and was pressuring Inman the entire race distance.

After a lap 13 caution, Janczuk would take over second from Inman, as Root was once again “The Man to beat”. Janczuk would try everything he could on lap 24 but was unable to pass Root.

Root would score the win over Inman, Janczuk, Tyler Corcoran, and qualifying heat winner Dylan Zacharias. Root would also set the overall quick time in the division with a 21.193-seconds.

Runner-up finisher Kyle Inman stated that his 20k machine worked better on the bottom of the track. “We feel really good finishing second”, Inman said. “Finishing second here is amazing, especially with all the competition that this division has”, Inman added. “Our car worked better on the inside than it did on the outside of the track, Inman continued.

“We had a tough time getting through the lap traffic”, says third-place finisher Matt Janczuk.