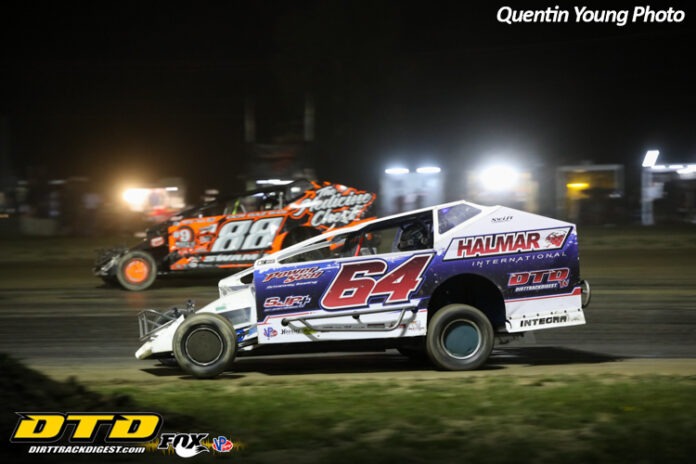 LAFARGEVILLE, NY – Tyler Corcoran capitalized at Can-Am Speedway in the third round of the DIRTcar Sportsman Modified Series Central Region schedule. Corcoran, driver of the #64 Halmar car, worked by Central Region round two winner Matt Janczuk plus the driver who lead the most laps, David Rogers. Two other race contenders, Mike Fowler and Josh Reome finished fourth and fifth respectively after 40 laps of tooth and nail battling on track.

But it only took one slip from leader David Rogers for Tyler Corcoran to pounce.

“Rogers was running the top and he screwed up with traffic just once and I had to take full advantage,” said Corcoran of his race-winning move. “Once I made it around I never looked back. We want wins and good points finishes and we want to be racing with the top Series guys. To come out here to my Friday night track and win a Series race is pretty special.”

“I was patient, “ noted Corcoran. “I waited and waited for my car to come in. Forty laps at Can-Am is a long race. It can really abuse your tires. Normally I push myself too hard here but tonight I just stayed back and let the track and race come to me.”

Besides the race-winning pass on Rogers, the #64 got around Matt Janczuk, who has had a lights-out 2021 season including a Series win at Brewerton Speedway.

“I was able to pick where I wanted to run on the track,” said Corcoran. “I was testing a lot of different lines out. When I caught up to Janczuk and lapped traffic I had to look everywhere. Lapped traffic is the toughest because when you are racing them and for position, you have to make sure you put the car in the right spots.”

Matt Janczuk may have been looking to flip on his police sirens when the #64 got by but he stayed patient despite falling to fourth with Mike Fowler all over him. Incredibly, he managed to make up those two spots on the final restart to finish in second, which was important for overall points.

“I think the right car won tonight,” said Janczuk. “We were a little bit off but we’ll take a second-place finish and add to our notes. We’ve been really consistent all year with a lot of wins. You can’t win them all. I felt like I was really good on entry to the middle but coming off I lost ground. We’ll keep working on it.”

Janczuk retains his points lead while Nick Guererri, who came into the event second in points, finished 20th. Guererri is still looking for a Can-Am set up he can find success with.

David Rogers picked up his first DIRTcar Sportsman Modified Series podium after 40 laps of hard battling with the top drivers in the Series. He led the most laps in the race but just fell short.

“At the beginning, I drove around the bottom but it was too hard down there,” said Rogers. “Everyone was there. I drove up from fifth to the lead at the top and lead for over 30 laps. They got me at the end in lapped traffic. The track was really racy. It was just the lapped cars that used up the top on me and he got me on the bottom.”

The next DIRTcar Sportsman Modified Series Central Region race is at Thunder Mountain Speedway in Center Lisle, NY on Tuesday, August 3 followed by Land of Legends Raceway the next night, Wednesday, August 4. Both races are paired with the Super DIRTcar Series Big Block Modifieds.