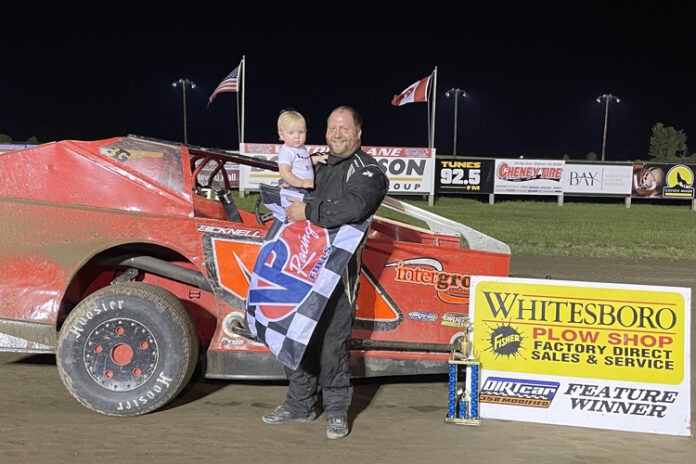 LAFARGEVILLE, NY – In the back and forth points chase for track champion in the Whitesboro Plow Shop DIRTcar 358 Modified division at Can-Am Speedway, it was Billy Dunn’s turn to shine in his number 49. Dunn climbed up from a 10th position start after having something of a lackluster heat race.

“We weren’t too great in the heat race,” Dunn said in the Bob Johnson Auto Group Victory Lane after the race. “We really weren’t great in the early part of the feature race either, but the track changed very quickly. Once I found that line, I was lucky nobody else was there. We changed the motor this morning. I was questioning whether it was the right thing to do, and I’m glad we did.”

Dunn steadily climbed through the field and took over the lead late in the race by lap 18 of the 25 lap feature. Behind him, 19 Tim Fuller was charging up to the front of the field as well. He was unable to complete the conquest, however having to settle for third position behind Dunn and RJ Tressider. Fuller was able to nab the Roof to Rails hard charger bonus money, however.

With the victory, Dunn is back in first place in the points race for track championship, with only three races remaining, weather permitting.

Tyler Corcoran was victorious once again in the Bob Johnson Auto Group DIRTcar Sportsman feature, passing up Dalton Rombough with just two laps remaining. As Corcoran was approaching then leader Rombough, they were coming up on lapped traffic. Corcoran was able to take the low groove and that gave him the open door for the lead and the win. Corcoran scored the Roof to Rails Hard Charger award as well.

Justin White returned to victory lane in the FABCO DIRTcar Pro Stock Feature. White had to battle 57k Kevin Fetterly and x15 Tyler Bushey through most of the race to land the score for the win.