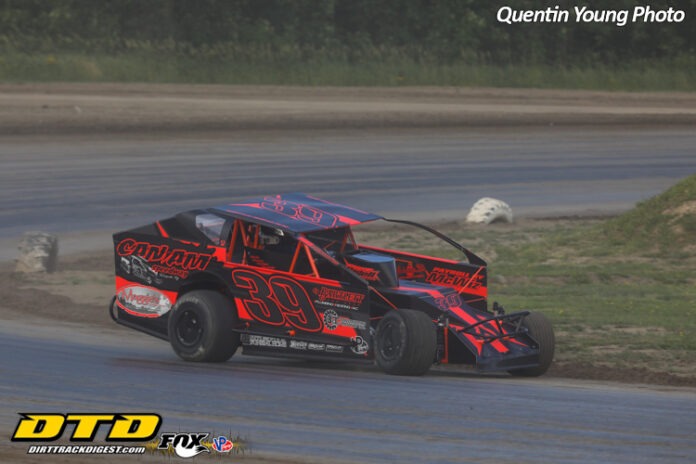 Fuller was crowned track champion after finishing the night in second place behind Ryan Bartlett in the feature race.

Entering Friday night, Fuller was tied with Billy Dunn for the points lead. The pair started the Whitesboro Plow Shop DIRTcar 358 feature side by side, Dunn in 13th position, Fuller in 14th. At the drop of the green, Fuller got a clear avenue toward the front, leaping up to 9th position by lap 5. Ryan Bartlett 39 and Tyler Meeks 9 battled for second position behind Andrew Howard 21h at the front of the pack. By lap 15 Bartlett had captured the lead from Howard. Meanwhile, Fuller managed to move up to 4th position, while Dunn was in 7th with just ten laps remaining. With 5 laps remaining, Bartlett still owned the lead, while Tim Fuller moved into third position. With a lap remaining Fuller moved into second and challenged Bartlett out of turn four on the final lap for the victory, but it was Ryan Bartlett with his second victory of the year, with Tim Fuller in second place. That second-place finish was enough to give Tim Fuller the Track Championship for 2021.

Tyler Corcoran 64 entered the night as the points leader in the Bob Johnson DIRTcar Sportsman division, starting the feature in 15th position. To solidify the track championship, Corcoran merely needed to finish 10th or better on the night. By lap five, Corcoran had already moved up to 12th position, as a caution came out, bringing the field back together for a restart. At the half-way point, Dalton Rambough 41 and Josh Reome 91 were pitching an absolute battle for first place, with Rambough slipping into the lead with just five laps remaining. At the checkered flag it was Dalton Rambough with his first victory at Can-Am for 2021, Josh Reome in second place and Tyler Corcoran in third position. That third-place finish served up the track championship on a silver platter for Corcoran, his second championship at Can-Am in back-to-back seasons.

Justin White 1x, the points leader in the FABCO DIRTcar Pro Stock Division heading into the night’s feature, started in 7th position. By lap two, White had moved up to 4th, focused on putting enough points up on the board for the night to be the unquestioned champion for 2021. After a lap two caution restart, White maneuvered up to second position, battling with Tyler Bushey. Through the middle of the race, White chased 91 Ian Bressett for the lead. At the checkered flag, it was 91 Ian Bressett with the victory, with Justin White in second. That second place finish clinched the track championship for White for 2021.


In the Marsha Gibbons TLC Real Estate Thunderstock division, Tony Frezzo 22 entered the night as the points leader. He started the night’s feature in 6th position and wasted no time driving to the front of the field. It was a three-way battle between Frezzo, A.J. St. Mary 111j and O.J. White 94 for the lead through laps 5 and 6, with Frezzo moving into sole possession of the lead by lap 7. With the lead firmly in hand, Frezzo drove away from the field to victory lane and the track championship.

In the Donath Motor Worx Sportsman Limited feature, it was Owen Nier 17 with the trip to the Bob Johnson Auto Group victory lane.

Tim Fuller Captured the Roof to Rails Hard Charger award in the 358 Feature, while Tyler Corcoran claimed the Hard Charger bonus in the Sportsman feature.

Racing returns for one final, spectacular weekend at Can-Am Speedway with back to back nights of the Showdown in September – Friday and Saturday night, Sept 10th & 11th. Visit racecanam.com for more info.