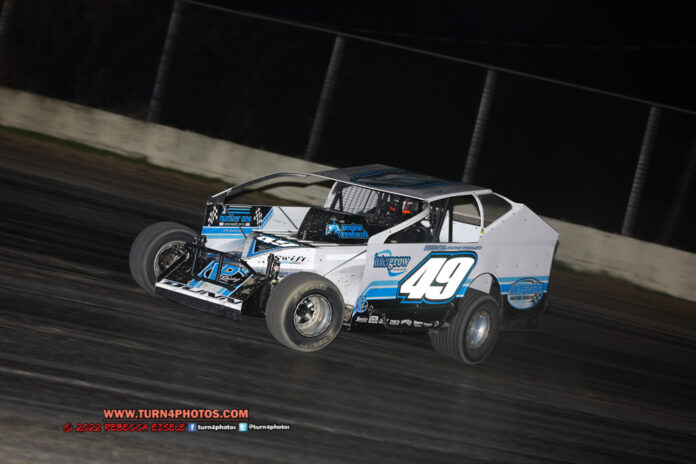 LAFARGEVILLE, NY – The 2022 season opener saw clear skies, a great crowd and a full pit area, with 6 divisions ready for action at the Can Am Speedway on VP Racing Fuels night.

The Whitesboro Plow Shop DIRTcar 358 Modifieds had several early restarts to begin the 25 lap affair. As the laps clicked off Taylor Capra was the driver in charge with Jordan McCreadie and defending track champion Tim Fuller close behind. Caprara ran the high lane but Fuller would make the bottom lane work as he took the lead on lap 8 and was in control of the field. Six-time track champion Billy Dunn was able to close the gap on Fuller as the race neared the half way point. Dunn would use the outside lane in turns three and four to grab the lead while Jordan McCreadie, Taylor Caprara and Lance Willix battled for top 5 positions. The top 2 were able to put plenty of distance on the field as they quickly approached lapped traffic. Dunn was working traffic perfectly and made some great moves through the lapped cars to keep Fuller at bay. In the end Tim Fuller did everything he could do but it was not enough as Billy Dunn would take the opening day victory. Tim Fuller finished a close 2nd, with Jordan McCreadie, over a half track behind would finish 3rd. Carey Terrance and Lance Willix rounded out the top 5.

Fire Swamp led in the early stages of the 20 lap, Bob Johnson Auto Group DIRTcar Sportsman feature. Swamp would lead the opening 6 laps as defending track champion Tyler Corcoran, Dave Rogers, Jessica Power and Mike Fowler would complete the top 5. Corcoran began to move in on the leader as they closed in on the halfway point. Swamp remained in control over Corcoran but Dave Rogers was within striking distance of the leaders. On lap 12 Corcoran’s hard work finally paid off as he took over the lead from Swamp with Rogers close behind in third. As the laps wound down Fire Swamp began to lose touch with the leader as Mike Fowler challenged for the runner up spot. On this night, it was all about Tyler Corcoran as he marched to his first win of the season over Fire Swamp, Mike Fowler, Dave Rogers and Ryan Shanahan.

Eli Gilbert was the early leader in the 20 lap FABCO DIRTcar Pro Stock feature. Gilbert led the way, however Bruno Richard was on the move and took the top spot away on lap 3. Richard was good on the longer runs as he began to pull away from Gilbert as Tyler Bushey, Kevin Fetterly Jr and Justin White continued their battle for third. Just past halfway defending track champion White, was on the move and made his way to 2nd. White started to challenge the leader, but lost the handle on his car spinning in turns 1 and 2 on lap 16. On the final restart Bruno Richard made his trip to Can Am from Gatineau Quebec well worth it, as he would go unchallenged for his first ever Can Am victory. Eli Gilbert crossed in 2nd over Kevin Fetterly Jr. Tyler Bushey and Dakota Sharp.

The debut of the new Panther Frameworx 602 Crate Sprint Cars looked like it was going to be a walk in the park for Logan Crisafulli after driving away from the field to well over a straight away lead. With 5 laps remaining Jonah Mutton started to close as the motor in the Crisafulli machine started to go south. Jonah Mutton and Ken Klinkowsky, closed quickly with 4 laps to go in the 15 lap event, to challenge for the win. Mutton made his move for the lead down the front stretchand would get it in turn 1. Ken Klinkowsky would try for the lead in turn three as the field came to the white flag, but spun while doing so. In the end it was Jonah Mutton making history winning the first ever Crate Sprint car feature at Can Am. Over Klinkowsky, Josh Verne Jr and Logan Crisafulli.

The Marsha Gibbons TLC Real Estate Thunderstock had a close finish at the end of their 15 lap event. Joe Orvis took the lead early but Chuck Monica and OJ White were close by. Monica tried several times to get by for the race lead, but it Joe Orvis holding on to win by a car length, over Chuck Monica, OJ White, Travis Berkman and Justin McIntyre.

It was a family affair at the front of the field in the 12 lap Donath Motorworx Limited Spotsman. Owen Nier started on the pole and led every lap with Keegan Nier and Cole Perry completing the top 3. Nier appeared to have the raced well in hand until the yellow flew setting up a one lap dash to the checkered flag. On the restart Nier would pull away to score the opening day victory. Over Keegan Nier, Cole Perry, Tim Bailey and Joe Trichilo.

Next week a full card of events is set for Friday night. For further information at the speedway on upcoming events, results and points standings, head to our website at racecanam.com. Also be sure check out our social media, including Facebook, Twitter and Instagram.