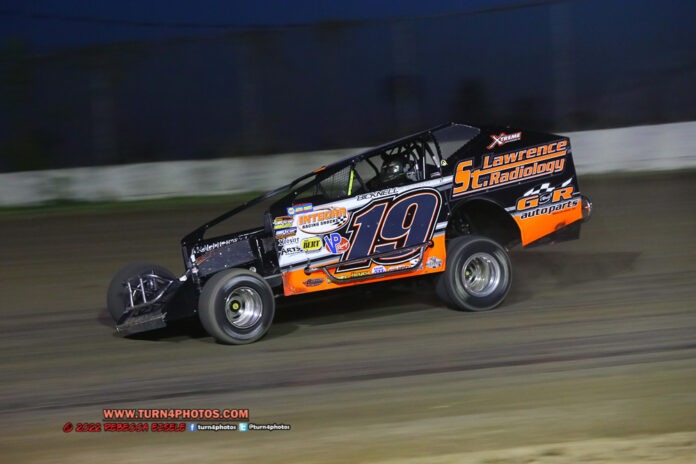 LAFARGEVILLE, NY – A picture-perfect evening at the Can Am Speedway this past Friday night as five classes were in action. Warm temperatures all evening made for a lightning-fast race track all night long. New faces and veterans dominated victory lane on this night.

Jeff Sykes was fast in the early portions of the Whitesboro Plowshop DIRTcar 358 Modified 25 lap feature. Sykes was able to take the lead from the drop of the green flag with Jordan Kelly, Preston Forbes, Ryan Bartlett and Derek Webb filling out the top 5 spots early on. Sykes was driving away from a quality field and looked to have the car to beat. At the halfway point defending track champion Tim Fuller started to charged forward. Fuller came from 15th on the grid and made his way to the top 3, getting by Bartlett and Forbes for 3rd. As the laps clicked off Fuller continued to flex his muscle, as he took 2nd from Kelly and reeled in Sykes. On lap 17 Fuller would use the bottom to take over the lead with Sykes and Jordan Kelly making up the top 3. From there it was no contest as Tim Fuller notched his first win of the season. Sykes came home 2nd with Jordan Kelly having a fantastic showing in 3rd, Derek Webb finished 4th while Lance Willix charged to 5th at the checkers.

The Bob Johnson Auto Group DIRTcar Sportsman 20 lap feature saw Eric Nier take over the lead and pull away from Frank Sibley and Tiger Chapman in the early laps. Nier looked to be the dominant car but on the move was Adams New York’s Brian Hudson. After starting in the 8th spot, Hudson made his move to the front early, eventually taking 2nd from Chapman and closed quickly on the leader. On lap 8 Hudson took the top spot away but Tiger Chapman was not making it easy on him. After falling back to 4th just past the halfway point. Chapman made his way forward getting to 2nd, with Nier, Tyler Stevenson and Frank Sibley making up the top 5. Hudson would slowly open up a comfortable lead but a lap 14 yellow would give Chapman one last shot at the top spot. On the restart Hudson was able to get away and there was not much Tiger Chapman could do as he started to fade in the final laps. Brian Hudson would go unchallenged to claim his first feature win of the season. Eric Nier edged out Tiger Chapman by a car length for 2nd over Dave Rogers and Remington Hamm.

A couple of early yellows would slow the start of the Donath Motorworx Limited Sportsman 12 lap contest. Once the laps clicked off, Belleville Ontario’s Cole Perry was the star of the show. Perry would put on a dominant performance in the early laps but Paul DeRuyter was on the move. After running much of the race in the 4th spot, DeRuyter charged to the 2nd spot and quickly closed on the leader. At the white flag lap Cole Perry found himself under pressure for the lead. Heading into turn 3 DeRuyter made a move on the bottom. It was a drag race to the line at the checkered flag and in the end, Cole Perry would claim career win number 1 by a half car length over DeRuyter. Keegan Nier, Owen Nier and Ray Hughto completed the top 5.

Jonah Mutton led early at the start of the 15 lap Panther Frameworx 602 Crate Sprint Cars with Josh Verne Jr. and Ryan Poole right there to challenge. Mutton and Verne both put on a great show as Verne was right there if a mistake was made. On lap 14 coming to the white flag, Jonah Mutton drifted up the track allowing Verne to take the lead. In the end it was Josh Verne Jr. winning his first ever feature on dirt in his career. Jonah Mutton, Ryan Poole, Logan Crisafulli and Ken Klinkowsky completed the field

After blowing a tire coming to the white flag in his qualifying heat, Justin Pope meant business in the start of the 15 lap Marsha Gibbons TLC Real Estate Thundercar feature. Pope went from last to 2nd in the 14 car field at the end of lap 1 as Justin Burns led the way. On lap 2 Pope powered by to pick up the lead. Pope was not to be denied as her claimed the win by nearly a half track. Last weeks winner Joe Orvis was 2nd, with Chuck Monica, Justin Burns and Steve Smith completing the top 5.

This coming Wednesday the Super DIRTcar Series Big Block Modifieds and the opener for the DIRTcar Pro Stock Series opener will take shape. Stewart Friesen dominated last years event and will look to do the same this year. The last time the DIRTcar Pro Stock Series was in town, it was track champion Justin White taking his first ever series win. Stay tuned to our website at racecanam.com or follow us on Facebook, Twitter and Instagram. 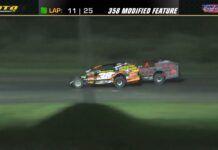