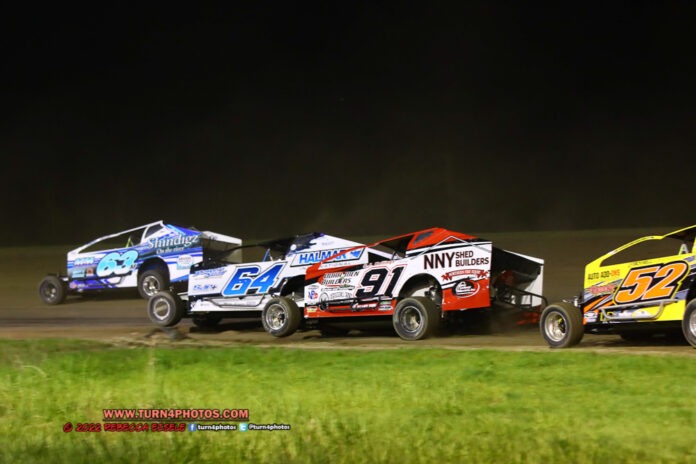 LAFARGEVILLE, NY-After a week off for the Memorial Day weekend and then battling the weather last week, the stars of the Can Am Speedway are ready to get back at it this weekend.

The Whitesboro Plowshop DIRTcar 358 Modifieds are ready for action this weekend and Tim Fuller is ready to make it three in a row. Fuller is having a strong start to the season and is coming off a good weekend, which saw him get his first DIRTcar Big Block Modified win of the season last Saturday night at the Land of Legends Raceway.

There may have been three different winners to kick of the 2022 campaign in the Bob Johnson Auto Group DIRTcar Sportsman division, but all drivers are chasing Lafargeville New York’s Dave Rogers. Even though he has not won in 2022 at Can Am in 2022, Rogers is the current point leader and searching for that third track title. He also, is coming off a solid weekend, with his 2nd DIRTcar Sportsman win of the season at the Fulton Speedway last Saturday night.

The Panther Frameworx 602 Crate Sprints has seen one driver put on a show in the last two weeks. Josh Verne Jr. has been the driver to beat and much like Fuller, will be looking for his third win in a row this weekend. More drivers are expected to join the competitive field Friday night.

Justin Pope has competed in two of the three races held in the Marsha Gibbons TLC Real Estate Thundercar division in 2022 and won both of them. Pope held off current points leader and opening day winner Joe Orvis for the win. Pope will also be looking to keep his perfect record going as racing action gets back to green this weekend.

The FABCO DIRTcar Pro Stocks were scheduled last Friday before rain washed out the night. The division is set to return on June 17th.

Bob Johnson Auto Group will be on hand as title sponsor for the evening. Racing gets underway at 7pm this coming Friday. For more information including results and more news happening at the speedway, visit our website at racecanam.com or give us a follow-on Facebook and Twitter.