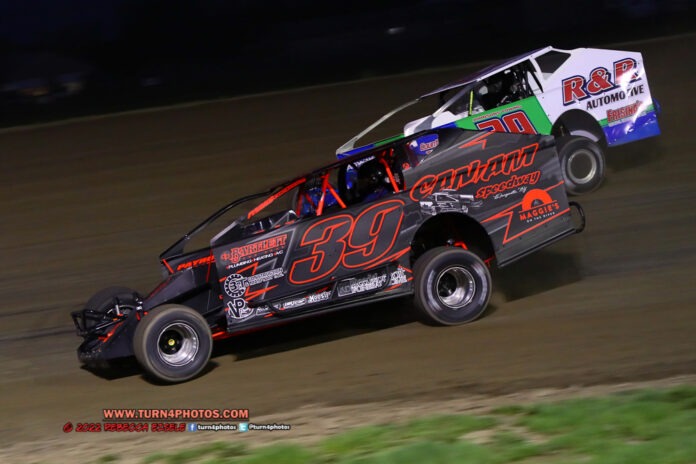 LAFARGEVILLE, NY – With the regular season now in the history books at the Can Am Speedway, the attention shifts to big fall shows across the northeast. The DIRTcar 358 Modified Series will be in town for round number three, with some local talent leading the points standings heading into the annual Showdown at Sundown.

Long time Can Am DIRTcar 358 Modified driver Ryan Bartlett leads the way after two events in the DIRTcar 358 Modified Series. After a strong 4th place finish in the season opener at the Fulton Speedway in April, followed by a strong top 10 finish at Thunder Mountain in early August, Bartlett has a slight lead of 4 points over former two-time DIRTcar Sportsman Series champion Dave Marcuccilli. Bartlett also enjoyed a fantastic regular season, never finishing out of the top 10 all year in any event and claimed 1 feature win, while also finishing 2nd in track points. Can Am regulars Lance Willix and defending series champion Billy Dunn are well within striking distance of Bartlett, currently 3rd and 4th in the title chase. Ronnie Davis III completes the top 5.

The DIRTcar 358 Modified Series has a long history at Can Am and was part of the original series schedule in 1983, when Northeast Hall of Famer Dave Heaslip claimed the first two shows in 1983 and 1984. Coming into this weekend Tim Fuller leads all drivers with 5 career series wins and incredible run of 5 top two finishes in the last 6 points paying shows at the speedway. Billy Dunn has been has gone head to head against Fuller and in the leas 5 events, Dunn has scored three wins including the last two in a row and after that big victory in race number two at the Thunder Mountain Speedway on August 10th, Dunn will be in search of his 4th series win at Can Am, to help get him into title contention, along with our own Lance Willix and points leader Ryan Bartlett.

Also on the card will be the 4th annual John Burr Memorial for the DIRTcar Sportsman Series. The event will allow drivers to claim points for the North and Central regions, which will help them in the overall championship. Tyler Corcoran who recently won the 2022 season finale and his third straight track championship, will look to claim his third series win at the Can Am Speedway. Corcoran is currently tied with Steve Hall, Matt Butler and Kevin Root, who also have two series wins. Lafargeville New York’s Dave Rogers will try to add his name to the list of two time winners having won the Central Region event on June 29th.

This event is more about getting a series win, however it’s more of a tribute to one of the original voices of auto racing in the Northeast, the late John Burr. “This is what you come to see Can Am!!! This is what you come to see!” and “These drivers are horsepower hungry tonight!”, are some of the many phrases John Burr made famous in his legendary career and this weekend Can Am will honor the voice of the speedway once again. Burr was on the microphone for some of the greatest moments in track history and other than the Thurston family, when everyone mentioned Can Am Speedway, you automatically mentioned John’s name. Burr was also the voice at the Evans Mills Raceway Park and was part of the announcing team for many years at NAPA Auto Parts Super Dirt Week.

The FABCO DIRTcar Pro Stocks will wrap up their 2022 campaign and Bruno Richard is the heavy favorite coming into the night. Richard has had a dominant season winning 4 events in 2022, but Tyler Bushey, who notched his second win of the season a couple of weeks ago, is only 20 points behind in the chase for the title.
The Marsha Gibbons TLC Real Estate Thundercars will also honor former north country small block competitor Ron White on Friday night with a $1000 top prize going to the feature winner. Ron won many features at several tracks in Northern New York and Southeastern Ontario. Ron’s family will be on hand to support one of the biggest paying events this season for the Thundercars with track regulars and invaders expected to be on hand, it should be an action packed event.

The 2022 season comes down to one final night, an action packed one as drivers lay it all on the line for big money and one more trophy to close out another memorable season at The Nasty Track of the North.