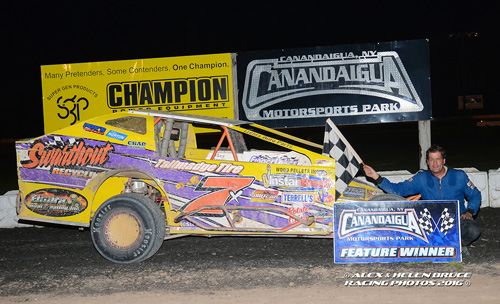 Justin Haers looked to have the field covered after taking off at the start and building up a huge lead during the mid portion of the feature, but he got a flat tire and had to pull pitside on lap 24. That handed the lead to Eldon Payne, who was running the high side of the track, while Steve Paine was working the bottom lane. Paine made the winning move on the final restart and took his first win of the season at the “Land Of Legends”. Justin Wright also slipped by Payne before the finish to grab the runnerup spot, with Payne settling in for third. James Sweeting and Randy Chrysler rounded out the top five finishers.

Paul Guererri was battling power steering issues during the evening, but did not let it stop him from finding Victory Lane in the 25-lap Sportsman feature event. Guererri was able to hold off Matt Guererri and Kevin Ridley over the final couple of laps to score his first win of the season, with Matt, Kevin Ridley, David Marcuccilli, and Kane Bristol completing the top five.

Jason Whipple made a great move on the outside lane coming to the white flag of the 305 Sprint car feature to steal the lead from Lee Sanders and score his first win of the season. Sanders and Tim Smith followed Whipple across the line.

The Street Stock division put on a fine show with Bob Buono holding off a hard charging Mike Minutolo at the checkered flag in the division’s first race of 2017. Adam Depuy, CJ Guererri, and Quinn Sutherland rounded out the top five.


The New Legends Sportsman rounded out the night with their feature, and Ben Karlsen came out of an intense battle with the victory over Dwight Nichols, Brian Harris, Brett Baldwin, and Brandon Michaud.