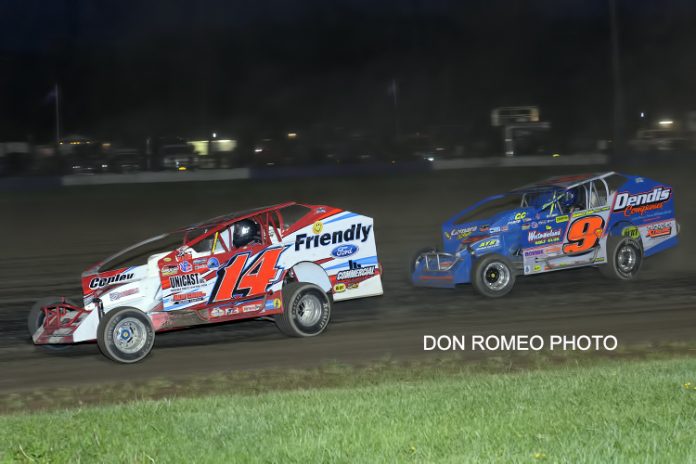 Sam Reakes IV was the early leader of the Lucas Oil Empire Super Sprint 25-lap ‘A’ Main as Jason Barney battled Dylan Swernik for the second spot.  As Barney moved to second, Chuck Hebing cracked the top five as Reakes lead by half a straightaway.  Reakes caught traffic on lap 6 which allowed the top five to close in together as they raced through the lapped cars.  Barney grabbed the lead off turn four at the halfway point as Hebing battled intensely with Swernik and Johnathan Preston.  Hebing tagged the frontstretch wall on lap 17 and was forced pitside as Barney stretched his lead over the battle for second place.  At the finish, Barney had a full straightaway lead in the non-stop feature and took the win while Reakes barely held off Swernik for second, followed by Shawn Donath and Johnathan Preston.

Dave Allen and Derrick Podsiadlo brought the field to the green flag at the start of the 35-lap Modified feature, with Allen pulling away to take the early lead.  Alan Johnson and Matt Sheppard were working their way from mid-pack to the front of the field at the lap 10 mark.  Johnson cracked the top 3 by lap 15 and a couple of laps later powered his way to the lead.  Sheppard soon moved into second and the battle was joined as the leaders entered lapped traffic.  Further back, Justin Haers and Erick Rudolph scrapped for positions in the top five.  The race’s lone caution flag flew on lap 26 when Eldon Payne’s slowing car was tagged by Mike O’Brien on the backstretch, which set the table for the final dash to the checkers.  Johnson got the hookup on the restart to pull away from Sheppard as Rudolph made a move on Haers to grab third spot.  At the finish, Johnson had a three car length margin of victory over Sheppard, followed by Rudolph, Haers, and Steve Paine.


Anthony Kimble jumped from the pole position into the lead of the 25-lap Sportsman feature and promptly built up a several car length lead over a battle for second that feature Kane Bristol and Austyn Fugle duking it out with Dave Marcuccilli, who had quickly motored from his 10th starting spot into the top five.  As the race moved into its middle stages, Kevin Ridley also joined in the fight as Marcuccilli picked off spots, making it into second by lap 10.  Two laps later, Marcuccilli got by Kimble and took the lead.  Marcuccilli pulled away to take a straightaway margin of victory over Ridley, who moved into second and had pulled away from Kimble.  Nick Guererri and Austyn Fugle were fourth and fifth across the line.

Shawn Lloyd moved into the lead at the opening of the 15-lap Street Stock feature event, but it didn’t take long for Adam Depuy to move into contention, as he got past CJ Guererri to take second just a couple of laps in and by lap 5 grabbed the top spot.  As Depuy pulled away, Bob Buono battled for the third spot with Marc Minutolo, with Buono locking down the third spot with five laps to go.  At the checkers, Depuy had his second win of the season, with Guererri, Buono, Minutolo, and Parker Smith rounding out the top five in a race slowed only once by a caution.

The 10-lap New Legends Sportsman feature went non-stop with all the action happening in the final two laps as Cameron Tuttle tried to find a way by race-long leader Brandon Mishaud.  Tuttle went to the outside on turn three of the final lap, drew even with Mishaud, and made the winning move in the run to the finish to take the win by half a car length.  Mishaud, Kasey Schmitt, Ken Wendt, and Ken Washburn rounded out the top five.