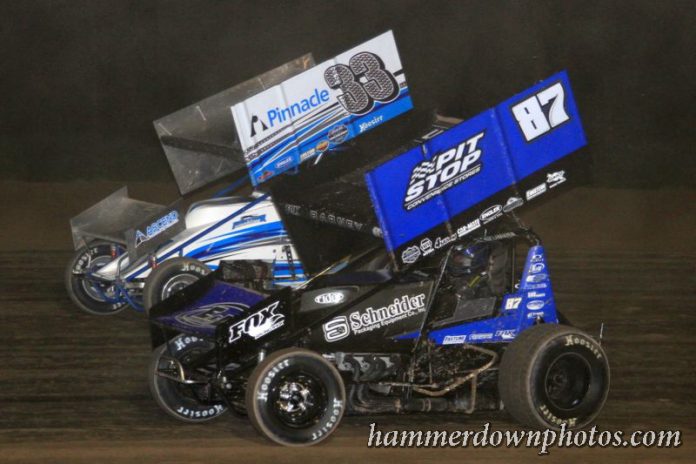 Barney, who started sixth, worked his way into second before a handful of laps were completed. From there he waited for the right time to make his move on outside pole-starter Reakes. That opportunity presented itself as the field came to the line at the halfway point. Barney worked by Reakes in traffic to get the lead at the exit of turn four. It was all she wrote from there as he checked out on the field for the $2,550 payday.

“We just feel anytime we come here we have a great race car,” said Barney. “The reason we don’t win is because of me or we don’t put ourselves in position to win. We have great race cars. I’m really happy to win here. I set a goal over the winter to win here at Canandaigua. It was getting a little old running second and third. We’ll take it and move on to tomorrow.”

Dylan Swiernik redrew the pole for the start of the feature but it was Reakes mastering the start to take the lead at the exit of the second corner on the outside. Reakes stayed on the outside of turns three and four to keep the lead of lap one over Swiernik.


Reakes was out in front as Swiernik had to contend Barney who eventually made the move by for second on lap five. Barney then put his full attention on Reakes at the front of the field. The two put a gap back to Swiernik as he settled into third in the running order.

Two circuits later Reakes got his first taste of traffic as he caught the back side of the field. Reakes remained in the outside groove while leading with Barney following him on the top initially. As the traffic got thicker, Barney started moving around looking for a faster lane on the half-mile.

Barney closed to the back tail tank of Reakes by lap 10. Then, coming to complete lap 13, Barney saw an opening. Barney went from the bottom of turns three and four to the top sliding up in front of Reakes to take the lead as they exited the corner.

“Sammy (Reakes) was really good,” commented Barney. “When you get out in front you don’t know what to do or where to go. I was able to race in traffic a little bit there. I could try some different things before I got to him. He was a little loose on the top of one and two and I was going through the middle. I didn’t want to get alongside of him there. Every time I got to him I had to wait. I thought I was going get him in one and two because he was better in three and four, but we had a good run there. I knew the time was now.”

Barney was glued to the bottom with his X-1 Race Car from that point forward while Reakes tried to chase him down on the top portion of the speedway to no avail. Behind the top two a great battle developed between Swiernik, Jonathan Preston and Chuck Hebing. The three ran three-wide all the way around the track as they each tried to gain an edge.

Hebing eventually dropped out on lap 18 after catching the wall on the exit of the fourth corner leaving Swiernik and Preston to continue their battle. Eventually Swiernik was able to shake Preston to keep third.

Barney was gone as the race came to a conclusion winning easily for his 14th career series triumph. Reakes held on to finish in the runner-up position with his No. 17 X-1 Race Car. Reakes felt like the top went away which opened the door for Barney to get by.

“That was a lot of fun,” mentioned Reakes. “I felt really good. I probably should have moved my groove down a little bit. I didn’t realize Jason was there. I saw him a couple times and I kept getting higher, higher and higher. I think the top started going away the more laps we ran. At the end I just couldn’t come off the corners like I was the first seven or eight laps. This is the best I’ve ever run here so I can’t complain about it.”

Swiernik, in only his second race of 2017, was able to bring it home in third. He’s always strong at Canandaigua and that was no different on Saturday night as he has some great races with several different drivers.

“I’m just lucky for third tonight,” said Swiernik. “Jason was fast tonight. Just hanging for third is huge for us. It’s only out second race out. We have a brand new frame, Panther Frameworx and 87 Speed shocks. We were fast tonight. This is something to build on. Sixth last week at Outlaw (Speedway) and third tonight, I couldn’t be happier.”

Shawn Donath, of South Onondaga, N.Y., snuck by Preston in the closing laps to finish in fourth. Preston had to settle for the fifth spot.

ESS/Canandaigua Notes: A stout field of 32 sprints filled the pit area…Promoter Jeremie Corcoran had a tough decision even to run the event with wet grounds, many teams needed haulers towed out afterwards but were glad the promoter hung on and was rewarded with a big crowd…Steve Doell, Jake and Mitch Brown, Paul Habeck, Chris Jones and Lee Sanders made first starts in 2017…ESS will make two more stops at Canandaigua for CNY Speedweek and the traditional Watkins Glen Weekend stop.